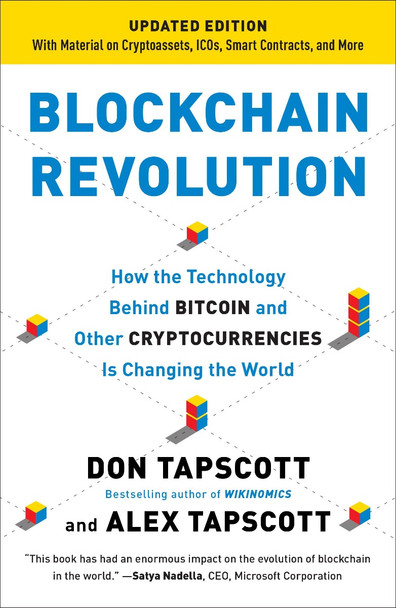 MSRP:
Now: List Price $19.00
Was:
— You save
Paperback
This product qualifies for FREE US Ground Shipping on orders over $100.

The first, foundational book on blockchain technology, from the bestselling author of Wikinomics Don Tapscott and blockchain expert Alex Tapscott, now in paperback with a new preface and chapter explaining recent developments in the world of blockchain, including cryptoassets, ICOs, smart contracts, and more.

“This book has had an enormous impact on the evolution of blockchain in the world.” —Satya Nadella, CEO, Microsoft Corporation In this revelatory book, Don and Alex Tapscott bring us a brilliantly researched, highly readable, and essential book about the technology driving the future of the economy.

Blockchain is the ingeniously simple, revolution­ary protocol that allows transactions to be simultaneously anonymous and secure by maintaining a tamperproof public ledger of value. Though it’s best known as the technology that drives bitcoin and other digital cur­rencies, it also has the potential to go far beyond currency, to record virtually everything of value to humankind, from birth and death certifi­cates to insurance claims, land titles, and even votes.

As with major paradigm shifts that preceded it, blockchain technology will create winners and losers. This book shines a light on where it can lead us in the next decade and beyond.

The book, Blockchain Revolution: How the Technology Behind Bitcoin and Other Cryptocurrencies Is Changing the World [Bulk, Wholesale, Quantity] ISBN# 9781101980149 in Paperback by Don Tapscott;Alex Tapscott may be ordered in bulk quantities. Minimum starts at 25 copies. Availability based on publisher status and quantity being ordered.
View AllClose

MSRP:
Now:
As low as
Was:
(An) irresistible account of a child's imaginary 8,000-mile journey through the earth to discover what's inside. Facts about the composition of the earth are conveyed painlessly and memorably"...

Breakthrough: How One Teen Innovator Is Changing the World

MSRP:
Now:
As low as
Was:
Featured in the 2018 movie Science Fair! A National Science Teachers Association Best STEM Book of 2017 In this acclaimed memoir, teen innovator and scientist Jack Andraka tells the story behind his...

Videocracy: How Youtube Is Changing the World . . . with Double Rainbows, Singing Foxes, and Other Trends We Can't Stop Watching

MSRP:
Now:
As low as
Was:
From YouTube's Head of Culture and Trends, a rousing and illuminating behind-the-scenes exploration of internet video's massive impact on our world. Whether your favorite YouTube video is a cat on a...

MSRP:
Now:
As low as
Was:
A desperate young man plans the perfect crime -- the murder of a despicable pawnbroker, an old women no one loves and no one will mourn. Is it not just, he reasons, for a man of genius to commit such...

The Return (Spirit Animals: Fall of the Beasts, Book 3)

MSRP:
Now:
As low as
Was:
Split between two worlds, Conor, Abeke, Meilin, and Rollan are four young heroes who are racing to stop an ancient evil. Even the spirit animal bond, the sacred link between humans and animals, is on...

MSRP:
Now:
As low as
Was:
The ability to connect with another person and truly be in tune with their physical and emotional state is one of the most elusive interpersonal skills to develop. This book shows you how. In our...

MSRP:
Now:
As low as
Was:
“An urban African-American girl and her father buy plants, potting soil, and a window box at the supermarket, ride the bus to their apartment, and put together a colorful gift for the child’s mother...

MSRP:
Now:
As low as
Was:
Christelow's popular story of the bedtime shenanigans of five little rambunctious monkeys is now available in an oversized board book just right for sharing. Full colorThe book, Five Little Monkeys...