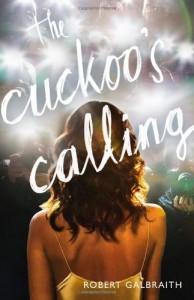 Did you happen to read The Cuckoo's Calling and think, "this writing style sounds familiar"? Well it should! The Sunday Times received an anonymous tip on twitter revealing J. K. Rowling as the secret author. After confronting Rowling, she surprisingly confirmed that she did in fact write the novel under the pseudonym Robert Galbraith, a suposed former member of the Special Investigative Branch of the Royal Military Police. The book, published by Little, Brown and Company, follows a military veteran hired to investigate the death of a supermodel. "I hoped to keep this secret a little longer, because being Robert Galbraith has been such a liberating experience!" she admitted.

It is no wonder Rowling decided to write under a pseudonym after The Casual Vacancy, Rowling's first publication after the Harry Potter series, received some harsh reviews by critics. Readers struggled to disassociate the fantasy of Harry Potter with the gritty reality of Vacancy.

This time Rowling fooled us all.

As of this morning, the book is completely sold out due to the massive rise in popularity. To reserve the title in bulk for the next reprint, Request a Quote with our Sales Team.