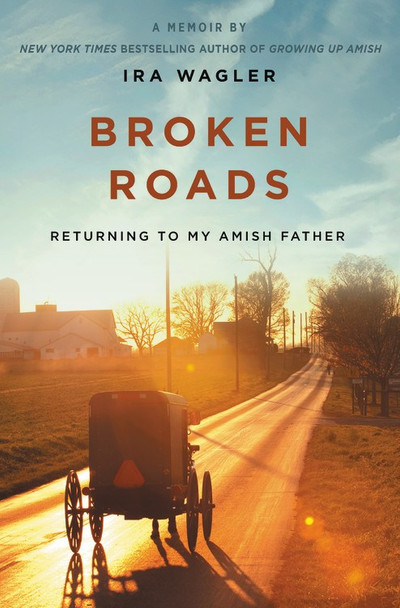 In this insightful memoir, the New York Times bestselling author of Growing Up Amish tries to reconcile his father, family, and heritage after leaving his faith behind.

In Broken Roads, Ira Wagler uses his singular voice to unapologetically, but compassionately, illuminate the inner world of the Amish community through his story of life after leaving, what feels like his inevitable return to his Amish father, and how they might mend the relationship between them before it's too late.

Through difficult reunions, struggles confronted, and betrayals revisited, Wagler explores burning questions of faith and identity shared by millions, whether Amish or not. Readers may recognize themselves along these paths with Wagler, as he grapples with choices, faith, family, the past, and the future.

The book, Broken Roads: Returning to My Amish Father [Bulk, Wholesale, Quantity] ISBN# 9781546012061 in Paperback by Ira Wagler may be ordered in bulk quantities. Minimum starts at 25 copies. Availability based on publisher status and quantity being ordered.
View AllClose

My Life on the Road

MSRP:
Now:
As low as
Was:
NEW YORK TIMES BESTSELLER | ONE OF O: THE OPRAH MAGAZINE’S TEN FAVORITE BOOKS OF THE YEAR | NAMED ONE OF THE BEST BOOKS OF THE YEAR BY Harper’s Bazaar • St. Louis Post-Dispatch • Publishers Weekly ...

The Song Poet: A Memoir of My Father

MSRP:
Now:
As low as
Was:
FINALIST FOR THE NATIONAL BOOK CRITICS CIRCLE AWARD AND THE MINNESOTA BOOK AWARD In the Hmong tradition, the song poet recounts the story of his people, their history and tragedies, joys and losses...

First They Killed My Father: A Daughter of Cambodia Remembers

MSRP:
Now:
As low as
Was:
One of seven children of a high-ranking government official, Loung Ung lived a privileged life in the Cambodian capital of Phnom Penh until the age of five. Then, in April 1975, Pol Pot's Khmer Rouge...

The Summer My Father Was Ten [Paperback]

MSRP:
Now:
As low as
Was:
A father tells his son the story of how he damaged a neighbor's garden when he was a boy and what he did to make amendsThe book, The Summer My Father Was Ten ISBN 9781563978296 in Paperback by...

Pumpkin Circle: The Story of a Garden

MSRP:
Now:
As low as
Was:
We can be sure of this: It's a circle without end. It'?s pumpkin seeds to pumpkins To pumpkin seeds again! This treat of a picture book comes cloaked in the colors of fall. Bouncy verse and glowing...

MSRP:
Now:
As low as
Was:
An astounding new feat of storytelling from Brian Selznick, the award-winning creator of The Invention of Hugo Cabret and Wonderstruck. A ship. A garden. A library. A key. In Kaleidoscope, the...

Framers: Human Advantage in an Age of Technology and Turmoil

MSRP:
Now:
As low as
Was:
The authors of the breakout bestseller Big Data now turn to what more data can't accomplish: the unique ability humans have to frame new questions and so get better results than anyone could have...

Diversity, Inc.: The Fight for Racial Equality in the Workplace

MSRP:
Now:
As low as
Was:
One of Time Magazine's Must-Read Books of 2019: An award-winning journalist shows how workplace diversity initiatives have turned into a profoundly misguided industry—and have done little to bring...

The Great Disruption: Competing and Surviving in the Second Wave of the Industrial Revolution [Hardcover]

MSRP:
Now:
As low as
Was:
The Great Disruption reveals how 3D printing manufacturing will transform the world in the same way that Henry Ford’s Model T upended transportation or Gutenberg’s printing press started an...