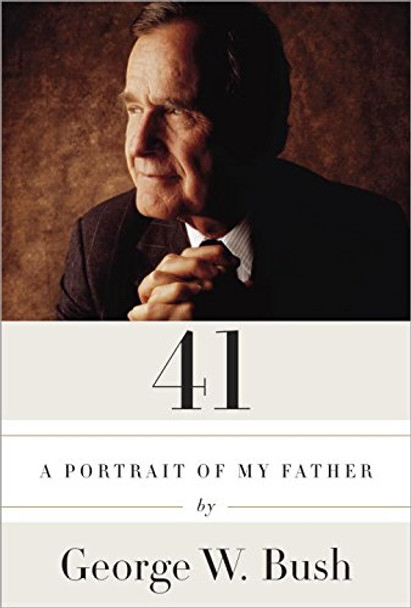 George W. Bush, the 43rd President of the United States, has authored a personal biography of his father, George H. W. Bush, the 41st President. Forty-three men have served as President of the United States. Countless books have been written about them. But never before has a President told the story of his father, another President, through his own eyes and in his own words. A unique and intimate biography, the book covers the entire scope of the elder President Bush’s life and career, including his service in the Pacific during World War II, his pioneering work in the Texas oil business, and his political rise as a Congressman, U.S. Representative to China and the United Nations, CIA Director, Vice President, and President. The book shines new light on both the accomplished statesman and the warm, decent man known best by his family. In addition, George W. Bush discusses his father’s influence on him throughout his own life, from his childhood in West Texas to his early campaign trips with his father, and from his decision to go into politics to his own two-term Presidency.

The book, 41: A Portrait of My Father [Bulk, Wholesale, Quantity] ISBN# 9780553447781 in Hardcover by Bush, George W may be ordered in bulk quantities. Minimum starts at 25 copies. Availability based on publisher status and quantity being ordered.
View AllClose

MSRP:
Now:
As low as
Was:
In this insightful memoir, the New York Times bestselling author of Growing Up Amish tries to reconcile his father, family, and heritage after leaving his faith behind. In Broken Roads, Ira Wagler...

The Summer My Father Was Ten [Paperback]

MSRP:
Now:
As low as
Was:
A father tells his son the story of how he damaged a neighbor's garden when he was a boy and what he did to make amendsThe book, The Summer My Father Was Ten ISBN 9781563978296 in Paperback by...

Dreams from My Father: A Story of Race and Inheritance

MSRP:
Now:
As low as
Was:
In this lyrical, unsentimental, and compelling memoir, the son of a black African father and a white American mother searches for a workable meaning to his life as a black American. It begins in New...

The Song Poet: A Memoir of My Father

MSRP:
Now:
As low as
Was:
FINALIST FOR THE NATIONAL BOOK CRITICS CIRCLE AWARD AND THE MINNESOTA BOOK AWARD In the Hmong tradition, the song poet recounts the story of his people, their history and tragedies, joys and losses...

First They Killed My Father: A Daughter of Cambodia Remembers

MSRP:
Now:
As low as
Was:
One of seven children of a high-ranking government official, Loung Ung lived a privileged life in the Cambodian capital of Phnom Penh until the age of five. Then, in April 1975, Pol Pot's Khmer Rouge...

A Stack of Alpacas (Macca the Alpaca)

MSRP:
Now:
As low as
Was:
Macca the alpaca is looking after his nieces and nephew and they are nothing but TROUBLE! Can Uncle Macca rein in this unruly trio? Smashing and splashing! Jumping and thumping! Macca is an alpaca...

MSRP:
Now:
As low as
Was:
Preschoolers will learn fun facts in this Smithsonian Kids book about dinosaurs, pterosaurs, fossils, and sea reptiles. This interactive board book is sturdy enough for the most enthusiastic little...

Under the Quilt of Night [Paperback]

MSRP:
Now:
As low as
Was:
Award-winning duo Deborah Hopkinson and James E. Ransome combine their talents once more for this sequel to the best-sellingSweet Clara and the Freedom Quilt.Traveling late one night, a runaway slave...

MSRP:
Now:
As low as
Was:
A game-changing model for giving effective feedback to peers, employees, or even your boss--without offending or demotivating. How are you supposed to tell someone that they're not meeting...

Charlie and the Chocolate Factory [Paperback]

MSRP:
Now:
As low as
Was:
One of many popular Roald Dahl books, Charlie and the Chocolate Factory is an imaginative classic that readers have been enjoying for many years. Not only that, but the book has been turned into...

The Picture of Dorian Gray and Other Writings [Mass Market Paperback]

MSRP:
Now:
As low as
Was:
Flamboyant and controversial, Oscar Wilde was a dazzling personality, a master of wit, and a dramatic genius whose sparkling comedies contain some of the most brilliant dialogue ever written for the...

Strong Is the New Pretty: A Celebration of Girls Being Themselves [Hardcover]

MSRP:
Now:
As low as
Was:
Girls being fearless. Girls being silly. Girls being wild, stubborn, and proud. Girls whose faces are smeared with dirt and lit up with joy. So simple and yet so powerful, Strong Is the New Pretty...

MSRP:
Now:
As low as
Was:
From the time it was written back in 1868, Louisa May Alcott’s Little Women has enchanted young readers, who identify with the realistic and lively personalities of the four March sisters. Growing up...