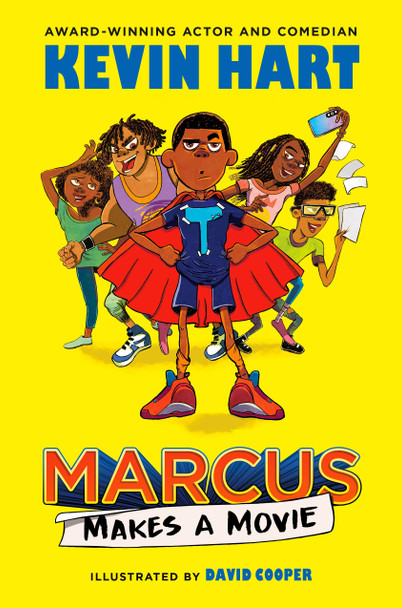 Marcus is NOT happy to be stuck in after-school film class . . . until he realizes he can turn the story of the cartoon superhero he’s been drawing for years into an actual MOVIE! There’s just one problem: he has no idea what he’s doing. So he’ll need help, from his friends, his teachers, Sierra, the strong-willed classmate with creative dreams of her own, even Tyrell, the local bully who’d be a perfect movie villain if he weren’t too terrifying to talk to.

Making this movie won’t be easy. But as Marcus discovers, nothing great ever is—and if you want your dream to come true, you’ve got to put in the hustle to make it happen.

Comedy superstar Kevin Hart teams up with award-winning author Geoff Rodkey and lauded illustrator David Cooper for a hilarious, illustrated, and inspiring story about bringing your creative goals to life and never giving up, even when nothing’s going your way.

The book, Marcus Makes a Movie [Bulk, Wholesale, Quantity] ISBN# 9780593179147 in Hardcover by Kevin Hart;Geoff Rodkey;David Cooper may be ordered in bulk quantities. Minimum starts at 25 copies. Availability based on publisher status and quantity being ordered.

MSRP:
Now:
As low as
Was:
In Jordan's prize-winning debut, prejudice takes many forms, both subtle and brutal. It is 1946, and city-bred Laura McAllan is trying to raise her children on her husband's Mississippi Delta farm—a...

MSRP:
Now:
As low as
Was:
Marcus Vega is six feet tall, 180 pounds, and the owner of a premature mustache. When you look like this and you're only in the eighth grade, you're both a threat and a target. After a fight at...

MSRP:
Now:
As low as
Was:
The Hobbit is one of the greatest fantasy sagas of all time, a classic that has captivated generations of readers and is now an eagerly anticipated film by Peter Jackson, Academy Award–winning...

MSRP:
Now:
As low as
Was:
A special edition of The Breadwinner, the first book in Deborah Ellis’s riveting Breadwinner series, will be published in fall 2017 to coincide with the launch of the animated movie. It is an...

MSRP:
Now:
As low as
Was:
"I do not speak carelessly or recklessly but with a definite object of helping the people, especially those of my race, to know, to understand, and to realize themselves."—Marcus Garvey, Halifax,...

MSRP:
Now:
As low as
Was:
Packed with comics, diagrams, and “secret diaries,” this book is a wondrous, encyclopedic glance at a dizzying host of different things—from hearts to farts to coconuts—and makes a hilarious and...

MSRP:
Now:
As low as
Was:
Winner of the 2016 Man Booker International Prize NAMED ONE OF THE BEST BOOKS OF THE YEAR BY The New York Times Book Review • Publisher's Weekly • Buzzfeed • Entertainment Weekly • Time • Wall...

Our Favorite Day of the Year

MSRP:
Now:
As low as
Was:
**A 2020 OWL AWARD LONGLIST WINNER IN THE PICTURE BOOKS CATEGORY**A heartwarming picture book following a group of boys from different backgrounds throughout the school year as they become the best...

MSRP:
Now:
As low as
Was:
An all-new storybook featuring Peppa--a lovable, slightly bossy little piggy! Includes stickers! It is bedtime for Peppa and George, but the little piggies are not sleepy! They must take their bath,...

MSRP:
Now:
As low as
Was:
Discusses where hurricanes come from, what types there are, and what can be done during one. The book, Hurricanes! (Hello Reader, Level 4) [Bulk, Wholesale, Quantity] ISBN# 9780590463782 in Paperback...

MSRP:
Now:
As low as
Was:
The funny follow-up to Kindergarten, Here I Come! Now includes a sheet of stickers! First grade—it's the big time! After all, it's a real honest to goodness grade. In verses that are both funny...

Felix Ever After [Paperback]

MSRP:
Now:
As low as
Was:
A Stonewall Honor Book From Stonewall and Lambda Award–winning author Kacen Callender comes a revelatory YA novel about a transgender teen grappling with identity and self-discovery while falling...