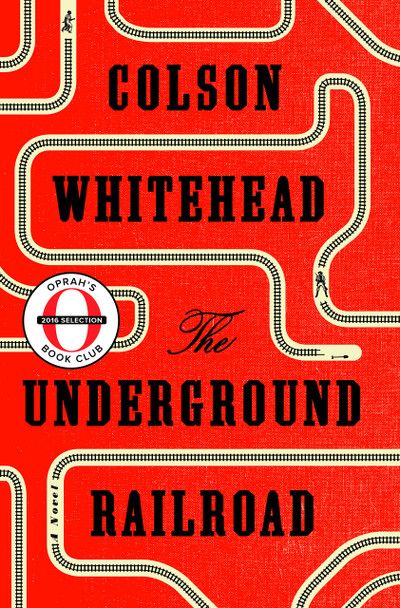 This Pulitzer Prize winning masterpiece tells the compelling story of a young slave’s adventures as she tries to win her freedom in the antebellum South.

Meet Cora, a slave on a cotton plantation in Georgia. Her future looks dim, as she is outcasted by her fellow Africans and entering womanhood. As she befriends a newcomer Caesar, who tells her about the Underground Railroad, the two decide to take the perilous risk and escape. Trouble follows and Cora is pushed to kill a young white boy who tries to capture her. Will they make it to safety before the slave catcher, Ridgeway, finds them?

In this fictional adaptation, Whitehead reimagines the slave narrative by depicting the Underground Railroad as an actual train network with engineers and conductors operating a series of secret tracks and tunnels beneath the soil. With each stop, Cora and Caeser find different worlds filled with the promise of freedom and the lurking danger that is following them.

With strong themes of bondage and violence, this title is recommended for readers at a college reading level. Order The Underground Railroad by Colson Whitehead in bulk for your school, book club, literary event, or curriculum. Purchase classroom novel sets from BookPal to receive brand new books at wholesale prices. BookPal is dedicated to providing customers with a large selection of class book sets, bargain books, and paperbacks in bulk, as well as payment options. Speak with a friendly customer service representative about your bulk book order today!

The book, The Underground Railroad (Oprah's Book Club): A Novel [Bulk, Wholesale, Quantity] ISBN# 9780385542364 in Hardcover by Colson Whitehead may be ordered in bulk quantities. Minimum starts at 25 copies. Availability based on publisher status and quantity being ordered.
View AllClose

MSRP:
Now:
As low as
Was:
A compulsively readable debut novel about marriage, immigration, class, race, and the trapdoors in the American Dream—the unforgettable story of a young Cameroonian couple making a new life in New...

MSRP:
Now:
As low as
Was:
AN INSTANT NEW YORK TIMES BESTSELLER / AN OPRAH’S BOOK CLUB PICK PRESIDENT OBAMA’S SUMMER 2021 READING LIST Longlisted for the Man Booker Prize In the spirit of The Known World and The...

MSRP:
Now:
As low as
Was:
From President Bill Clinton's recommended reading list Publishers Weekly Bestseller Warnings is the story of the future of national security, threatening technologies, the U.S. economy, and...

MSRP:
Now:
As low as
Was:
When Strega Nona leaves him alone with her magic pasta pot, Big Anthony is determined to show the townspeople how it works in this classic Caldecott Honor book from Tomie dePaola. Strega...

Power Moves: How Women Can Pivot, Reboot, and Build a Career of Purpose

MSRP:
Now:
As low as
Was:
**A 2020 OWL AWARD SHORTLIST WINNER IN THE WOMEN IN BUSINESS CATEGORY**From the founder of the influential website Career Contessa, an invaluable career resource for women feeling stuck or...

MSRP:
Now:
As low as
Was:
Celebrating all the beautiful browns in one child’s colorful family. Mama’s brown is chocolate, clear, dark, and sweet. Daddy’s brown is autumn leaf, or like a field of wheat. Granny’s brown is like...

MSRP:
Now:
As low as
Was:
The most popular epic of Western culture springs to life in Allen Mandelbaum's magnificent translation. Homer's masterpiece tells the story of Odysseus, the ideal Greek hero, as he travels home to...

MSRP:
Now:
As low as
Was:
From this simple beginning grows a story that celebrates those little changes that tell us we're growing up! This Ruth Krauss classic enchanted young readers when it was first published in 1947. Now...