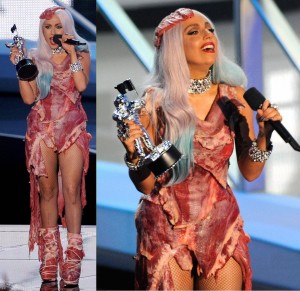 Random House has a acquired a book by Stefani Germanotta, better known by her stage name, Lady Gaga, in a recent publisher house auction. Lady Gaga's upcoming title is a work of fiction, tentatively titled 'Meatsuit' and is slated for release in early 2015.

Although in the early stages, the storyboard for 'Meatsuit' generated a substantial buzz in the publishing world and the bidding began at seven figures, although a rep from Random House declined to comment on the details of the negotiation. "We're hoping for another big star best seller, like John Lithgow's 'I'm a Manatee' or 'Palo Alto,' by James Franco," said the rep, who asked to remain anonymous. "Although 'Meatsuit' may not reach the heights of Pamela Anderson's novel, 'Star Struck,' we're excited to work with Ms. Germanotta as she makes her literary debut."

The book is described as a "futuristic Bildungsroman with darkly comedic undertones" and tells the story of a girl named Aarekj. According the proposal, the story is set on a distant planet Xlaeteaxt, a world that parallels ours, but suffers under an oppressive government regime and attacks by the eponymous 'meatsuits' - terrifying creatures who were once human. "It's different from anything we've ever done before," commented Random House's editor-in-chief. "Very experimental and creative - just what you'd expect from the mind behind Lady Gaga's persona."

Lady Gaga could not be reached for comment at this time, but her rep stated that she is "thrilled to be working with Random House on her latest creative endeavor."