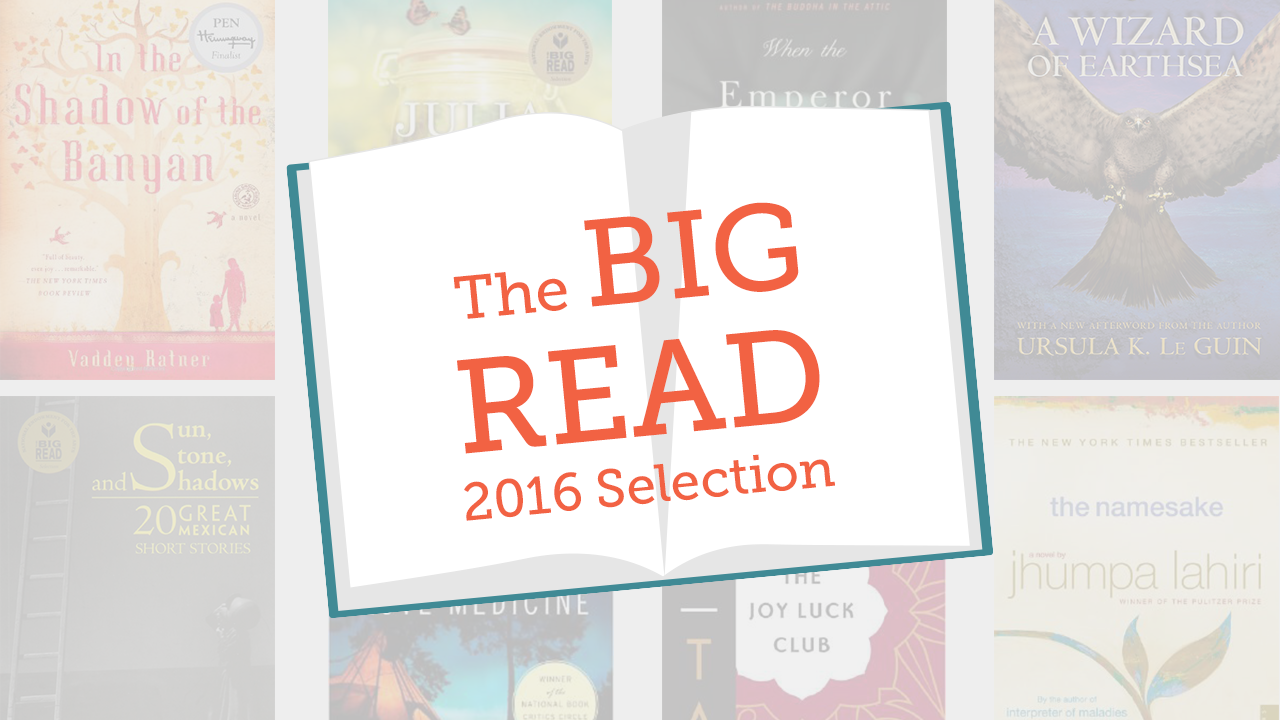 These are the books being read this year for Big Read programs across the country!

The National Endowment for the Arts Big Read program offers grants to support innovative community reading programs designed around the study of a single book. The initiative aims to broaden our understanding of our communities, our world, and ourselves through reading a good story.

– The Adventures of Tom Sawyer by Mark Twain: Follow Tom Sawyer as he wreaks havoc along the Mississippi river.
– True Grit by Charles Portis: One-eyed marshal "Rooster" Cogburn and 14-year-old Mattie Ross must avenge Mattie's father.
– The Call of the Wild by Jack London: Abducted from his home, Buck must battle to become the leader of a new pack.
– A Wizard of Earthsea by Ursula K. Le Guin: Only the power of language can restore balance to this dangerous world.

– Their Eyes Were Watching God by Zora Neale Hurston: Janie Mae Crawford grows from a voiceless teenage girl into a woman who takes charge of her own destiny.
– Bless Me, Ultima by Rudolfo A. Anaya: Antonio Juan Márez y Luna grapples with faith, identity, and death as he comes of age in New Mexico.

– The Stories and Poems of Edgar Allan Poe: This book features Poe's work that has haunted readers for more than 150 years.
– Sun, Stone, and Shadows by Jorge F. Hernandez: A superb selection of the finest Mexican short stories ever written, this anthology glimpses into Mexico's fascinating and diverse culture.
– The Joy Luck Club by Amy Tan: The Joy Luck Club includes the interwoven stories of four Chinese immigrant mothers and their American daughters.

– Fahrenheit 451 by Ray Bradbury: This dystopian future novel stars Guy Montag, a fireman who burns books for a living.
– To Kill a Mockingbird by Harper Lee: Scout Finch bears witness to a racially charged trial that shapes the character of her Alabama community.
– The Great Gatsby by F. Scott Fitzgerald: Nick Carraway narrates Jay Gatsby's quest to win back his first love.
– A Farewell to Arms by Ernest Hemingway: This classic World War I novel narrates the tragedy of an American ambulance driver on the Italian front.

– Love Medicine by Louise Erdrich: The interwoven lives of generations of Kashpaws and Lamartines illustrate the enduring power of love.
– When the Emperor Was Divine by Julie Otsuka: A Japanese-American family is forced to live in an internment camp during World War II.
– The Namesake by Jhumpa Lahiri: The Ganguli family move from their traditional life in Calcutta to America.
– In the Time of Butterflies by Julia Alvarez: The Mirabal sisters, who grew up in the Dominican Republic, are involved in the rebellion against dictator Rafael Trujillo.
– In the Shadow of the Banyan by Vaddey Ratner: Raami is swept from an idyllic childhood into four years of hardship during Khmer Rouge's reign.

Copy this Code to Share The Infographic on Your Own Blog

This post was written by Elizabeth Lee, the marketing associate at BookPal. She is currently reading The Organized Mind by Daniel J. Levitin and Outliers by Malcolm Gladwell.