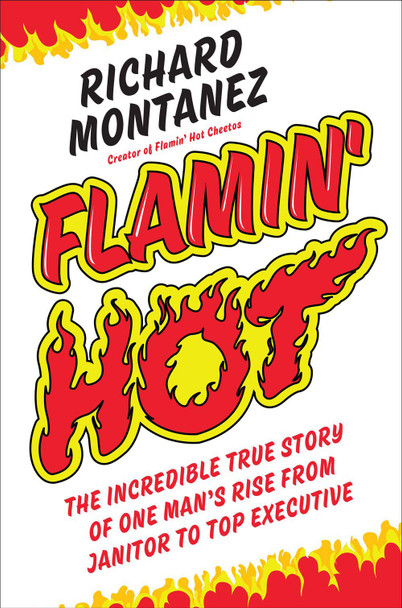 Act like an owner--even if you work on the ground floor--and huge opportunities will present themselves to you.

The cult favorite snack Flamin' Hot Cheetos would never have existed save for the entrepreneurial thinking of a Frito-Lay janitor named Richard Montañez. He snuck a garbage bag full of plain Cheetos home, and, armed with a vision to share his Mexican culture with the world, seasoned them with his wife's secret recipe for chili sauce. After an intense process of experimenting and testing--and an incredibly risky call to the company's CEO, breaking with protocol--Richard launched Flamin' Hot Cheetos. His product soon became a billion-dollar phenomenon that changed Frito-Lay and the entire food industry forever. Richard's break with protocol sent shock waves through the rigid corporate structure, where most people stayed in their own lane.

In Flamin' Hot, Richard distills what he's learned over a wildly successful career about finding hidden chances to advance in dead-end jobs, offering practical steps anyone can use to advocate for themselves and get ahead. The secret, he found, is to act like an owner--even if you're an entry-level employee. Through stories of Richard's journey from a migrant labor camp in Southern California to the executive office of Frito-Lay, Richard teaches readers to:

• See opportunities that everyone (including their boss) is missing by using the "What if? What then?" method
• Pitch their idea to a skeptical room of decision-makers using his powerful storytelling formula
• Fight back strategically when jealous coworkers try to derail their success
• Save time and emotional energy by influencing the people that matter, rather than trying to please everyone

Flamin' Hot provides hope that present circumstances don't have to dictate the future, carving a new path to the American Dream for anyone without connections, education, or money.

The book, Flamin' Hot: The Incredible True Story of One Man's Rise from Janitor to Top Executive [Bulk, Wholesale, Quantity] ISBN# 9780593087466 in Hardcover by Richard Montanez may be ordered in bulk quantities. Minimum starts at 25 copies. Availability based on publisher status and quantity being ordered.
View AllClose

When They Were Boys: The True Story of the Beatles' Rise to the Top

MSRP:
Now: $24.95
Was:
This is the story of the Beatles’ harrowing rise to fame: focusing on that seven-year stretch from the time the boys met as teenagers to early 1964, when the Fab Four made their momentous first...

Blindsided: The True Story of One Man's Crusade Against Chemical Giant DuPont for a Boy with No Eyes [Paperback]

MSRP:
Now: $17.95
Was:
In 1996, an unprecedented decade-long courtroom battle was waged in Florida to help bring justice and hope to the family of a young boy born with no eyes after his mother was doused outside of a...

MSRP:
Now: $28.00
Was:
With laugh-out-loud funny parenting observations, the NYT bestselling author and award-winning comedian delivers a book that is perfect for anyone who has ever raised a child, been a child, or...

Inky's Great Escape: The Incredible (and Mostly True) Story of an Octopus Escape

MSRP:
Now: $16.95
Was:
Inky’s Incredible Idea for an Ingenious Escape. Based on a true story, this tale follows a daring, Houdini-esque octopus as he performs his greatest escape act yet. In April 2016, The New York Times...

MSRP:
Now: $30.00
Was:
From the pages of Epic magazine come the true stories that Inspired the Apple Original Series. Includes nearly a hundred color photographs and a Foreword by Kumail Nanjiani. Nearly everyone in...

MSRP:
Now: $7.95
Was:
A desperate young man plans the perfect crime -- the murder of a despicable pawnbroker, an old women no one loves and no one will mourn. Is it not just, he reasons, for a man of genius to commit such...

MSRP:
Now: $6.99
Was:
Morgan is sad and mad at the world because things are not going the way she wants them to go. Why does my daddy have to leave again to save the country? Why do I have to go live with mommy and her...

Off Like the Wind!: The First Ride of the Pony Express

MSRP:
Now: $17.99
Was:
In 1860, the first Pony Express rider set out on a trail from Missouri to California. With him, he carried a special delivery... The book, Off Like the Wind!: The First Ride of the Pony Express...

MSRP:
Now: $34.95
Was:
The Updated Fourth Edition of the Award-Winning Book that Offers Beginning Educators Everything They Need in Order to Survive and Thrive! Designed for new educators, this award-winning book covers...

MSRP:
Now: $25.99
Was:
If you dread conflict, you're not alone. Research suggests that interpersonal conflict is the biggest daily stressor we face, and most us go through life avoiding potential conflicts at work and at...

MSRP:
Now: $9.99
Was:
A primer on the policies and candidacy of the Democratic senator from New Jersey, who has made social and racial justice his foundation. Is he the right Democrat to take on Trump? Cory Booker, New...

The Essential 55 Workbook: Revised and Updated

MSRP:
Now: $15.99
Was:
From the Disney Teacher of the Year and New York Times bestselling author comes the ideal updated companion to the revised edition of The Essential 55. Ron Clark's The Essential 55 took the country...

The Second Life of Tiger Woods

MSRP:
Now: $28.00
Was:
From Michael Bamberger, author most recently of the New York Times best seller Men in Green, the intimate and extraordinary Tiger Woods comeback story, in which the iconic golfer - his game, body,...

MSRP:
Now: $8.95
Was:
Introduces concepts of climate, geography, and ecosystems by using those features in South America as examples. The book, Explore South America (Explore the Continents #7) [Bulk, Wholesale, Quantity]...

How to Defend Your Family and Home: Outsmart an Invader, Secure Your Home, Prevent a Burglary and Protect Your Loved Ones from Any Threat

MSRP:
Now: $19.99
Was:
The Ultimate Guide to Protecting Yourself and Your Family from a Home Invasion Dave Young has survived his fair share of violent attacks, including witnessing a home invasion first-hand as a teenager...