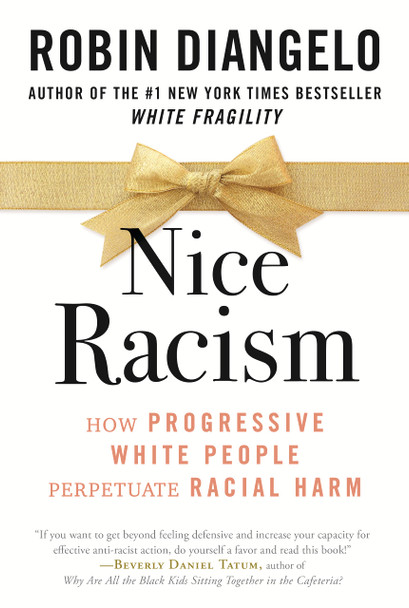 In White Fragility, Robin DiAngelo explained how racism is a system into which all white people are socialized and challenged the belief that racism is a simple matter of good people versus bad. DiAngelo also made a provocative claim: white progressives cause the most daily harm to people of color. In Nice Racism, her follow-up work, she explains how they do so. Drawing on her background as a sociologist and over 25 years working as an anti-racist educator, she picks up where White Fragility left off and moves the conversation forward.

Writing directly to white people as a white person, DiAngelo identifies many common white racial patterns and breaks down how well-intentioned white people unknowingly perpetuate racial harm. These patterns include:

-rushing to prove that we are “not racist”;
-downplaying white advantage;
-romanticizing Black, Indigenous and other peoples of color (BIPOC);
-pretending white segregation “just happens”;
-expecting BIPOC people to teach us about racism;
-carefulness;
-and feeling immobilized by shame.

DiAngelo explains how spiritual white progressives seeking community by co-opting Indigenous and other groups’ rituals create separation, not connection. She challenges the ideology of individualism and explains why it is OK to generalize about white people, and she demonstrates how white people who experience other oppressions still benefit from systemic racism. Writing candidly about her own missteps and struggles, she models a path forward, encouraging white readers to continually face their complicity and embrace courage, lifelong commitment, and accountability.

Nice Racism is an essential work for any white person who recognizes the existence of systemic racism and white supremacy and wants to take steps to align their values with their actual practice. BIPOC readers may also find the “insiders” perspective useful for navigating whiteness.

The book, Nice Racism: How Progressive White People Perpetuate Racial Harm [Bulk, Wholesale, Quantity] ISBN# 9780807074121 in Hardcover by Robin DiAngelo may be ordered in bulk quantities. Minimum starts at 25 copies. Availability based on publisher status and quantity being ordered.

White Fragility: Why It's So Hard for White People to Talk about Racism

MSRP:
Now:
As low as
Was:
The New York Times best-selling book exploring the counterproductive reactions white people have when their assumptions about race are challenged, and how these reactions maintain racial inequality. ...

White Rage: The Unspoken Truth of Our Racial Divide

How : People, Places, and Ideas

The Shift: How Seeing People as People Changes Everything

MSRP:
Now:
As low as
Was:
A vivid depiction and real-world example of the personal and institutional impact of the Arbinger Insititute's transformative ideas (Leadership and Self-Deception; 1.4 million copies sold) within a...

MSRP:
Now:
As low as
Was:
A sweeping examination of how American racism has broken the country's social compact, eroded America's common goods, and damaged the lives of every American and a heartfelt look at how these deep...

MSRP:
Now:
As low as
Was:
California continues to be ravaged by devastating wildfires. Lauren Tarshis's heart pounding story tells of two children who battle the terrifying flames and -- despite the destruction -- find hope...

MSRP:
Now:
As low as
Was:
Hidden Forest has a new resident. Little Red Hen and her seven little chicks have moved into a cottage and plan to grow a bountiful crop of corn in the nearby field. The problem is that none of the...

Storey's Curious Compendium of Practical and Obscure Skills: 214 Things You Can Actually Learn How to Do

MSRP:
Now:
As low as
Was:
**A 2020 OWL AWARD SHORTLIST WINNER IN THE GIFT & SPECIAL INTEREST CATEGORY**Have you ever wondered how to capture a swarm of bees? Predict the weather by the clouds? And just how do you darn a...

MSRP:
Now:
As low as
Was:
In this, the original book about the curious monkey, George is taken from the jungle by the man in the yellow hat to live in a new home, but--oh, what happened! Though trying to be good, George is...

MSRP:
Now:
As low as
Was:
"And Mommy looks at me like today will be my last day alive." When does a toddler start to learn right from wrong? What happens in a family that influences a decision going through a young mind? "I...

MSRP:
Now:
As low as
Was:
Your quick guide to identifying birds At the cabin, in the garden, or on a hike, keep this tabbed booklet close at hand. Based on Stan Tekiela’s best-selling bird field guides and featuring 130...