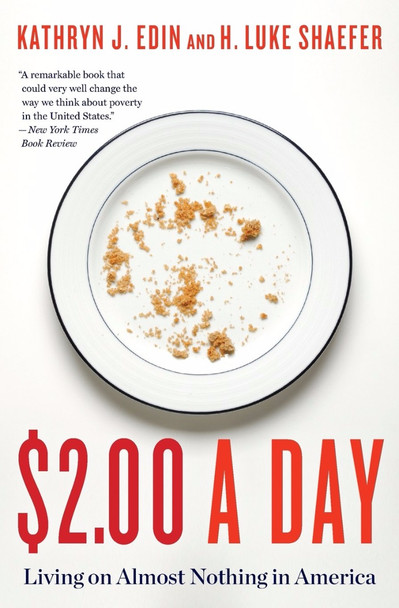 A New York Times Notable Book of the Year “A remarkable book that could very well change the way we think about poverty in the United States.” — New York Times Book Review “Powerful . . . Presents a deeply moving human face that brings the stunning numbers to life. It is an explosive book . . . The stories will make you angry and break your heart.” — American Prospect Jessica Compton’s family of four would have no income if she didn’t donate plasma twice a week at her local donation center in Tennessee. Modonna Harris and her teenage daughter, Brianna, in Chicago, often have no food but spoiled milk on weekends. After two decades of brilliant research on American poverty, Kathryn Edin noticed something she hadn’t seen before — households surviving on virtually no cash income. Edin teamed with Luke Shaefer, an expert on calculating incomes of the poor, to discover that the number of American families living on $2.00 per person, per day, has skyrocketed to one and a half million households, including about three million children. Where do these families live? How did they get so desperately poor? Through this book’s eye-opening analysis and many compelling profiles, moving and startling answers emerge. $2.00 a Day delivers new evidence and new ideas to our national debate on income inequality. “Harrowing . . . [An] important and heart-rending book, in the tradition of Michael Harrington’s The Other America.” — Los Angeles Times

The book, $2.00 a Day: Living on Almost Nothing in America [Bulk, Wholesale, Quantity] ISBN# 9780544811959 in Paperback by Kathryn J. Edin;H. Luke Shaefer may be ordered in bulk quantities. Minimum starts at 25 copies. Availability based on publisher status and quantity being ordered.
View AllClose

Seize the Day: Living on Purpose and Making Every Day Count

MSRP:
Now:
As low as
Was:
#1 New York Times bestselling author Joyce Meyer shares a purposeful approach to everyday living, helping readers claim the good things God has in store for them each day. Today is no ordinary day...

Nothing but the Truth [Paperback]

MSRP:
Now:
As low as
Was:
In this thought-provoking examination of freedom, patriotism, and respect, ninth-grader, Philip Malloy, is kept from joining the track team by his failing grades in English class. Convinced that the...

Born Bright: A Young Girl's Journey from Nothing to Something in America [Hardcover]

MSRP:
Now:
As low as
Was:
Standing on the stage, I felt exposed and like an intruder. In these professional settings, my personal experiences with hunger, poverty, and episodic homelessness, often go undetected. I had worked...

Another Day in the Death of America: A Chronicle of Ten Short Lives [Paperback]

MSRP:
Now:
As low as
Was:
On an average day in America, seven children and teens will be shot dead. In Another Day in the Death of America, award-winning journalist Gary Younge tells the stories of the lives lost during one...

Living Beyond Borders: Growing Up Mexican in America

MSRP:
Now:
As low as
Was:
*"This superb anthology of short stories, comics, and poems is fresh, funny, and full of authentic YA voices revealing what it means to be Mexican American . . . Not to be missed."--SLC, starred...