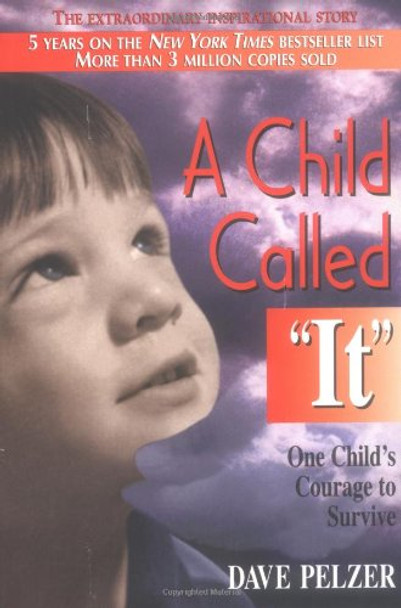 This book chronicles the unforgettable account of one of the most severe child abuse cases in California history. It is the story of Dave Pelzer, who was brutally beaten and starved by his emotionally unstable, alcoholic mother: a mother who played tortuous, unpredictable games--games that left him nearly dead. He had to learn how to play his mother's games in order to survive because she no longer considered him a son, but a slave; and no longer a boy, but an "it." Dave's bed was an old army cot in the basement, and his clothes were torn and raunchy. When his mother allowed him the luxury of food, it was nothing more than spoiled scraps that even the dogs refused to eat. The outside world knew nothing of his living nightmare. He had nothing or no one to turn to, but his dreams kept him alive--dreams of someone taking care of him, loving him and calling him their son.

The book, A Child Called It [Bulk, Wholesale, Quantity] ISBN# 9781558743663 in Paperback by Pelzer, Dave may be ordered in bulk quantities. Minimum starts at 25 copies. Availability based on publisher status and quantity being ordered.
View AllClose

MSRP:
Now:
As low as
Was:
Norman John Gillies was one of the last children ever born on St Kilda, five years before the whole population was evacuated forever to the British mainland. People had lived on these islands for...

The Yes Brain: How to Cultivate Courage, Curiosity, and Resilience in Your Child

MSRP:
Now:
As low as
Was:
From the authors of The Whole-Brain Child and No-Drama Discipline, an indispensable guide to unlocking your child’s innate capacity for resilience, compassion, and creativity. When facing contentious...

MSRP:
Now:
As low as
Was:
Read the New York Times bestseller that has taken the world by storm! Meet Ove. He’s a curmudgeon—the kind of man who points at people he dislikes as if they were burglars caught outside his bedroom...

The Yes Brain: How to Cultivate Courage, Curiosity, and Resilience in Your Child [Hardcover]

MSRP:
Now:
As low as
Was:
From the authors of The Whole-Brain Child and No-Drama Discipline, an indispensable guide to unlocking your child’s innate capacity for positive thinking. When facing challenges, unpleasant tasks,...

MSRP:
Now:
As low as
Was:
Diagnosis is not destiny. Autism. ADHD. Learning difficulties. Epilepsy. Cerebral palsy. Traumatic brain injury. From the moment your child is diagnosed with a special needs condition, you are...

MSRP:
Now:
As low as
Was:
The longest-running picture book on the New York Times bestseller list, now available in a board book Press the yellow dot on the cover of this interactive children's book, follow the instructions...

Carry on: A Story of Resilience, Redemption, and an Unlikely Family

MSRP:
Now:
As low as
Was:
In the spirit of The Blind Side and Friday Night Lights comes a tender and profoundly moving memoir about an ESPN producer’s unexpected relationship with two disabled wrestlers from inner city...

World of Wonders: In Praise of Fireflies, Whale Sharks, and Other Astonishments

Sis, Don't Settle: How to Stay Smart in Matters of the Heart

MSRP:
Now:
As low as
Was:
DATE SMARTER, MAKE BETTER DECISIONS IN LOVE, AND ACHIEVE THE RELATIONSHIP YOU DESERVE… IT ALL STARTS WITH NOT SETTLING! By day, Faith Jenkins is the host of the nationally syndicated TV show...

MSRP:
Now:
As low as
Was:
Starting school is an adventure—especially when you have a magical unicorn friend by your side! Kids can conquer their first-day-of-school jitters with this colorful, beautifully illustrated...

MSRP:
Now:
As low as
Was:
National Book Award Finalist * Printz Award Winner for Best Young Adult Book of the Year “Ruby’s novel deserves to be read and reread. It is powerful, beautiful, extraordinary.”—School Library...