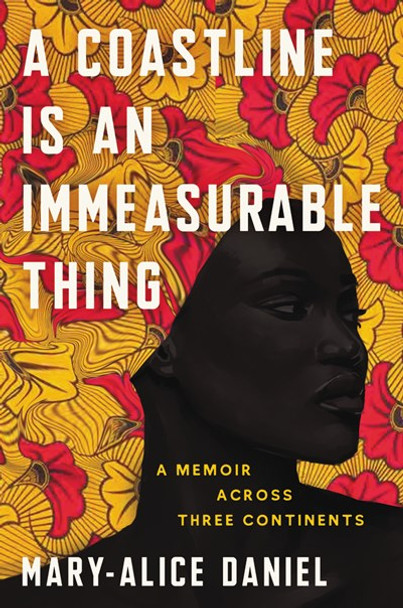 A poetic coming-of-age memoir that probes the legacies and myths of family, race, and religion—from Nigeria to England to America

Mary-Alice Daniel’s family moved from West Africa to England when she was a very young girl, leaving behind the vivid culture of her native land in the Nigerian savanna. They arrived to a blanched, cold world of prim suburbs and unfamiliar customs. So began her family’s series of travels across three continents in search of places of belonging.

A Coastline Is an Immeasurable Thing ventures through the physical and mythical landscapes of Daniel’s upbringing. Against the backdrop of a migratory adolescence, she reckons with race, religious conflict, culture clash, and a multiplicity of possible identities. Daniel lays bare the lives and legends of her parents and past generations, unearthing the tribal mythologies that shaped her kin and her own way of being in the world. The impossible question of which tribe to claim as her own is one she has long struggled with: the Nigerian government recognizes her as Longuda, her father’s tribe; according to matrilineal tradition, Daniel belongs to her mother’s tribe, the nomadic Fulani; and the language she grew up speaking is that of the Hausa tribe. But her strongest emotional connection is to her adopted home: California, the final place she reveals to readers through its spellbinding history.

Daniel’s approach is deeply personal: in order to reclaim her legacies, she revisits her unsettled childhood and navigates the traditions of her ancestors. Her layered narratives invoke the contrasting spiritualities of her tribes: Islam, Christianity, and magic. A Coastline Is an Immeasurable Thing is a powerful cultural distillation of mythos and ethos, mapping the far-flung corners of the Black diaspora that Daniel inherits and inhabits. Through lyrical observation and deep introspection, she probes the bonds and boundaries of Blackness, from bygone colonial empires to her present home in America.

The book, A Coastline Is an Immeasurable Thing: A Memoir Across Three Continents [Bulk, Wholesale, Quantity] ISBN# 9780062960047 in Hardcover by Mary-Alice Daniel may be ordered in bulk quantities. Minimum starts at 25 copies. Availability based on publisher status and quantity being ordered.
View AllClose

MSRP:
Now:
As low as
Was:
How many countries are in North America? Where do bald eagles live? What language is spoken in Mexico? This book answers these questions and more as it introduces young readers to the continent of...

MSRP:
Now:
As low as
Was:
"Sunshine, you're my baby and I'm your only mother. You must mind the one taking care of you, but she's not your mama."... The book, Three Little Words: A Memoir [Bulk, Wholesale, Quantity] ISBN#...

MSRP:
Now:
As low as
Was:
Describes the geography, climate, natural resources, and wildlife of Antarctica. The book, Explore Antarctica (Explore the Continents #2) [Bulk, Wholesale, Quantity] ISBN# 9780778730859 in Paperback...

MSRP:
Now:
As low as
Was:
Three generations of African-American women remember their "childtimes" in this lyrical memoir spanning a century of American history. This book preserves the lives and communities of times past for...

MSRP:
Now:
As low as
Was:
“I come from a family forged by tragedies and bound by a remarkable, unbreakable love,” Hunter Biden writes in this deeply moving memoir of addiction, loss, and survival. When he was two years...

MSRP:
Now:
As low as
Was:
The riveting true story of America’s first homegrown Islamist terror attack, the 1977 Hanafi Muslim siege of Washington, D.C. Late in the morning of March 9, 1977, seven men stormed the Washington,...

MSRP:
Now:
As low as
Was:
Creative icon, visionary, and dreamer, Stan Lee co-created many of pop culture’s most significant characters, including Spider-Man, Black Panther, and the Avengers. Stan Lee: A Life is the...