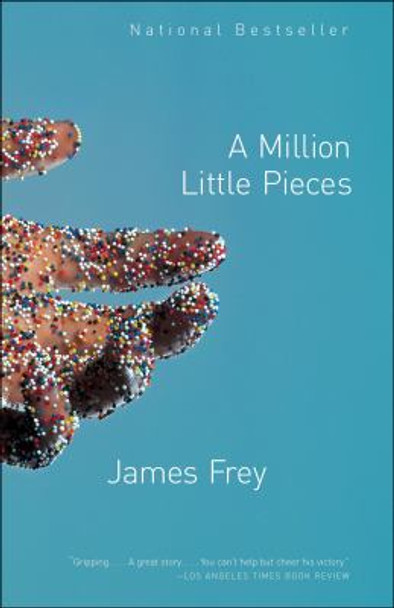 At the age of 23, James Frey woke up on a plane to find his front teeth knocked out and his nose broken. He had no idea where the plane was headed nor any recollection of the past two weeks. An alcoholic for ten years and a crack addict for three, he checked into a treatment facility shortly after landing. There he was told he could either stop using or die before he reached age 24. This is Frey’s acclaimed account of his six weeks in rehab.

The book, A Million Little Pieces [Bulk, Wholesale, Quantity] ISBN# 9780307276902 in Paperback by Frey, James may be ordered in bulk quantities. Minimum starts at 25 copies. Availability based on publisher status and quantity being ordered.
View AllClose

MSRP:
Now:
As low as
Was:
Eddie Ball has the chance of a lifetime: to win a million dollars by sinking a foul shotduring halftime at the NBA finals, no less. But someone really wants Eddie to shoot an air ball on the big day,...

MSRP:
Now:
As low as
Was:
Everyone loves unicorns—and bestselling illustrator Lulu Mayo presents enchanting illustrations of these fantasy creatures to color. Unicorns on rainbows, dancing in the clouds, gathering in...

MSRP:
Now:
As low as
Was:
This addition to Lulu Mayo’s popular series of coloring books features the animal of the moment: adorable, friendly sloths. Who could resist? br> Chubby sloths, smiling sloths, and sloths that...

Friendship Isn't a Big Thing, It's a Million Little Things: The Art of Female Friendship

MSRP:
Now:
As low as
Was:
Celebrate the bonds you’ve built with the wonderful women in your life. The bond shared among girlfriends is like no other. Whether the friendship is decades old or just beginning, we share a unique...

MSRP:
Now:
As low as
Was:
Now in paperback--an acclaimed and brilliant debut that tells the story of two young boys who suddenly find themselves with a huge amount of money and only have seven days to spend it before it...

Saving the Ghost of the Mountain : An Expedition among Snow Leopards in Mongolia [Paperback]

MSRP:
Now:
As low as
Was:
The only global great ideas reader, with new chapters on Ethics & Empathy and Visual Arguments. With 77 readings by some of the world’s great thinkers, Reading the World is the only great ideas...

I Can Only Draw Worms

MSRP:
Now:
As low as
Was:
A hilarious picture book in bright, neon colors that is perfect for fans of The Book With No Pictures and The Day the Crayons Quit. This is part counting book, part introduction to worms, but all...

MSRP:
Now:
As low as
Was:
Thirteen-year-old Travis has a secret: he can't read. But a shrewd teacher and a sassy girl are about to change everything in this witty and deeply moving novel. Travis is missing his old home in the...

MSRP:
Now:
As low as
Was:
Little Maya has a special blanket that Grandma stitched with her own two hands. As Maya grows, her blanket becomes worn and frayed, so with Grandma s help, Maya makes it into a dress. Over time the...

MSRP:
Now:
As low as
Was:
The white shape silhouetted against a blue background changes on every page. Is it a rabbit, a bird, or just spilt milk? In this childhood classic, kids are kept guessing until the surprise ending...