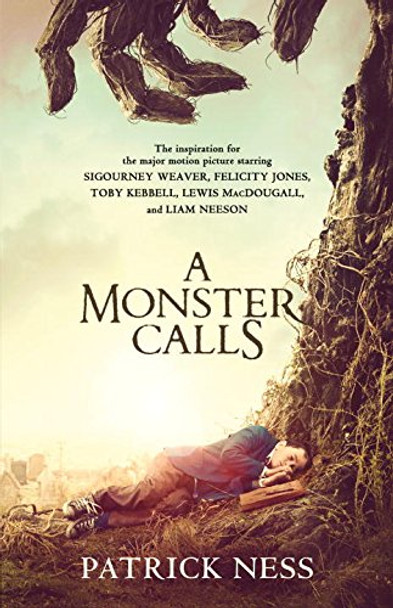 Made into a major motion picture, this bestselling book is also a Carnegie Medal Winner and has been selected as a Global Read Aloud 2017 title.

An unflinching, darkly funny, and deeply moving story of a boy, his seriously ill mother, and an unexpected monstrous visitor. At seven minutes past midnight, thirteen-year-old Conor wakes to find a monster outside his bedroom window. But it isn't the monster Conor's been expecting-- he's been expecting the one from his nightmare, the nightmare he's had nearly every night since his mother started her treatments. The monster in his backyard is different. It's ancient. And wild. And it wants something from Conor. Something terrible and dangerous. It wants the truth. From the final idea of award-winning author Siobhan Dowd-- whose premature death from cancer prevented her from writing it herself-- Patrick Ness has spun a haunting and darkly funny novel of mischief, loss, and monsters both real and imagined.

The book, A Monster Calls: A Novel (Movie Tie-in): Inspired by an idea from Siobhan Dowd [Bulk, Wholesale, Quantity] ISBN# 9780763692155 in Paperback by Patrick Ness may be ordered in bulk quantities. Minimum starts at 25 copies. Availability based on publisher status and quantity being ordered.
View AllClose

MSRP:
Now: $12.00
Was:
An unflinching, darkly funny, and deeply moving story of a boy, his seriously ill mother, and an unexpected monstrous visitor. At seven minutes past midnight, thirteen-year-old Conor wakes to find a...

Mastering the Process: From Idea to Novel

MSRP:
Now: $29.00
Was:
For many writers, the biggest challenge is figuring out how to take that earliest glimmer of inspiration and shape it into a full-length novel. How do you even begin to transform a single idea into a...

The First Phone Call from Heaven: A Novel

MSRP:
Now: $24.99
Was:
The First Phone Call from Heaven tells the story of a small town on Lake Michigan that gets worldwide attention when its citizens start receiving phone calls from the afterlife. Is it the greatest...

The Crafty Gardener: Inspired Ideas and DIY Crafts from Your Own Backyard

MSRP:
Now: $22.99
Was:
Awakening the gardener in all of us: Gardening allows us to live in a much more human way, grounded in nature and connected to Mother Earth and all she provides. Even if your garden is just a hanging...

MSRP:
Now: $24.95
Was:
An inspirational and practical guide for anyone who wants to incorporate the dynamic skills of entrepreneurs into their own lives and work. A new generation of "life entrepreneurs" is emerging:...

MSRP:
Now: $19.99
Was:
What does it take for lasting change to take root in your life? If you've ever tried, failed, and wondered why, you need How People Change. This book explains the biblical pattern for change in a...

To Catch a Cheat: A Jackson Greene Novel

MSRP:
Now: $16.99
Was:
Jackson Greene is riding high. He is officially retired from conning, so Principal Kelsey is (mostly) off his back. His friends have great new projects of their own. And he's been hanging out a lot...

MSRP:
Now: $26.99
Was:
From bestselling author of She’s Not There, New York Times opinion columnist, and human rights activist Jennifer Finney Boylan, Good Boy: My Life in Seven Dogs, a memoir of the transformative power...

MSRP:
Now: $24.95
Was:
Warren Buffett and his company, Berkshire Hathaway, are legendary for their distinctive investing approach. Yet many equally unconventional but less well known aspects of Berkshire’s managerial...

MSRP:
Now: $3.00
Was:
Perhaps the best-known and most popular of Edith Wharton's novels, Ethan Frome is widely considered her masterpiece. Set against a bleak New England background, the novel tells of Frome, his ailing...

MSRP:
Now: $16.99
Was:
**A 2019 OWL AWARD LONGLIST WINNER IN THE MIDDLE SCHOOL CATEGORY**A heartbreaking and powerful story about a black boy killed by a police officer, drawing connections through history, from...

MSRP:
Now: $17.99
Was:
Beloved and New York Times bestselling author Todd Parr uses his signature blend of playfulness and sensitivity to explore the value and joy in being kind to others. With his trademark bright colors...