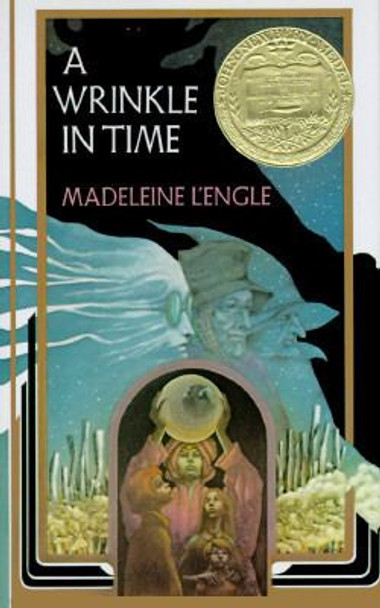 It was a dark and stormy night; Meg Murry, her small brother Charles Wallace, and her mother had come down to the kitchen for a midnight snack when they were upset by the arrival of a most disturbing stranger. "Wild nights are my glory," the unearthly stranger told them. "I just got caught in a downdraft and blown off course. Let me sit down for a moment, and then I'll be on my way. Speaking of ways, by the way, there is such a thing as a tesseract." A tesseract (in case the reader doesn't know) is a wrinkle in time. To tell more would rob the reader of the enjoyment of Miss L'Engle's unusual book. A Wrinkle in Time, winner of the Newbery Medal in 1963, is the story of the adventures in space and time of Meg, Charles Wallace, and Calvin O'Keefe (athlete, student, and one of the most popular boys in high school). They are in search of Meg's father, a scientist who disappeared while engaged in secret work for the government on the tesseract problem.

The book, A Wrinkle in Time ( Madeleine L'Engle's Time Quintet ) [Bulk, Wholesale, Quantity] ISBN# 9780374386139 in Hardcover by L'Engle, Madeleine may be ordered in bulk quantities. Minimum starts at 25 copies. Availability based on publisher status and quantity being ordered.
View AllClose

A Wrinkle in Time

MSRP:
Now:
As low as
Was:
The 50th Anniversary Commemorative Edition of Madeleine L'Engle's ground-breaking science fiction and fantasy classic, soon to be a major motion picture. Fifty years ago, Madeleine L'Engle introduced...

A Wrinkle in Time: The Graphic Novel

MSRP:
Now:
As low as
Was:
Winner of the 1963 Newbery Medal, A Wrinkle in Time is a unique classic that has captivated readers since it’s publication. Madeleine L’Engle’s story creates a world of fantasy and magic that young...

MSRP:
Now:
As low as
Was:
A movie tie-in edition to the upcoming major motion picture, now including an introduction by director Ava DuVernay. In 1962, Madeleine L’Engle debuted her novel A Wrinkle in Time, which would go on...

A Wind in the Door (A Wrinkle in Time Quintet)

MSRP:
Now:
As low as
Was:
It is November. When Meg comes home from school, Charles Wallace tells her he saw dragons in the twin's vegetable garden. That night Meg, Calvin and C.W. go to the vegetable garden to meet the...

A Wrinkle in Time [Paperback]

MSRP:
Now:
As low as
Was:
It was a dark and stormy night; Meg Murry, her small brother Charles Wallace, and her mother had come down to the kitchen for a midnight snack when they were upset by the arrival of a most disturbing...

MSRP:
Now:
As low as
Was:
Shawn McDaniel is an enigma and a miracle--except no one knows it, least of all his father. His life is not what it may seem to anyone looking at him. Not even those who love him best have any idea...

MSRP:
Now:
As low as
Was:
Clean up your diet and look and feel better than ever with this simple, beautiful cookbook featuring more than 100 recipes that make it easy and delicious to eat clean and green. We all know we...

MSRP:
Now:
As low as
Was:
The ApPeel® Medio Staple-Stitched Journal is made from apple peels that are ground and emulsified into an organic paper. It measures 5 1/4" x 8 3/8" and features staple stitching, 48 apple paper...

MSRP:
Now:
As low as
Was:
Avi's beloved and award-winning Poppy series continues with this brand-new adventure beautifully illustrated by FlocaThe book, Poppy and Ereth ISBN 9780061119712 in Paperback by Avi may be ordered in...

If You Give a Pig a Pancake [Hardcover]

MSRP:
Now:
As low as
Was:
If you give a pig a pancake, she'll want some syrup to go with it. You'll give her some of your favourite maple syrup, and she'll probably get all sticky, so she'll want to take a bath. She'll ask...

MSRP:
Now:
As low as
Was:
A powerful and visually stunning anthology from some of the most groundbreaking Native artists working in North America today. Truly universal in its themes, Dreaming In Indian will shatter commonly...