All Quiet on the Western Front ( Everyman's Library Contemporary Classics ) 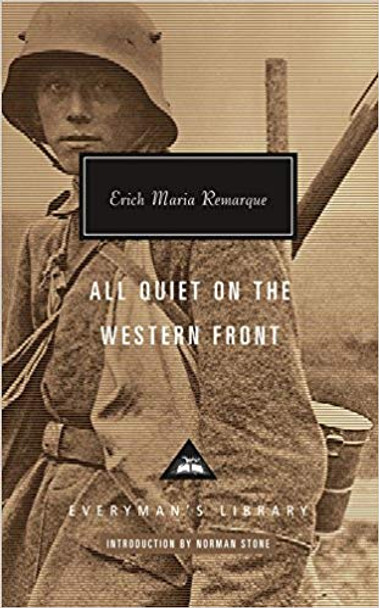 All Quiet on the Western Front ( Everyman's Library Contemporary Classics )

On the hundredth anniversary of the end of World War I: a hardcover edition of the classic tale of a young German soldier's harrowing experiences in the trenches, widely acclaimed as the greatest war novel of all time. When twenty-year-old Paul Bäumer and his classmates enlist in the German army during World War I, they are full of youthful enthusiam. But the world of duty, culture, and progress they had been taught to believe in shatters under the first brutal bombardment in the trenches. Through the ensuing years of horror, Paul holds fast to a single vow: to fight against the principle of hate that meaninglessly pits young men of the same generation but different uniforms against one another. Erich Maria Remarque's classic novel not only portrays in vivid detail the combatants' physical and mental trauma, but dramatizes as well the tragic detachment from civilian life felt by many upon returning home. Remarque's stated intention--"to tell of a generation of men who, even though they may have escaped shells, were destroyed by the war"--remains as powerful and relevant as ever, a century after that conflict's end.

The book, All Quiet on the Western Front ( Everyman's Library Contemporary Classics ) [Bulk, Wholesale, Quantity] ISBN# 9781101908082 in Hardcover by Erich Maria Remarque may be ordered in bulk quantities. Minimum starts at 25 copies. Availability based on publisher status and quantity being ordered.
View AllClose

MSRP:
Now:
As low as
Was:
(Book Jacket Status: Jacketed) The story of Hester Prynnefound out in adultery, pilloried by her Puritan community, and abandoned, in different ways, by both her partner in sin and her...

All Quiet on the Western Front

MSRP:
Now:
As low as
Was:
Considered by many the greatest war novel of all time, All Quiet on the Western Front is Erich Maria Remarque’s masterpiece of the German experience during World War I. I am young, I am twenty years...

MSRP:
Now:
As low as
Was:
THINGS FALL APART tells two overlapping, intertwining stories, both of which center around Okonkwo, a “strong man” of an Ibo village in Nigeria. The first of these stories traces Okonkwo's fall from...

MSRP:
Now:
As low as
Was:
Sssh! Listen, what s that noise? Each room in a house has different noises and in this book the text and visual clues help a child experience the home through sound, which will be familiar to those...

All Quiet on the Western Front [Mass Market Paperback]

MSRP:
Now:
As low as
Was:
Paul Baumer enlisted with his classmates in the German army of World War I. Youthful, enthusiastic, they become soldiers. But despite what they have learned, they break into pieces under the first...

MSRP:
Now:
As low as
Was:
James R. Hannibal presents a thrilling adventure through history, complete with mysteries, secret items, codes, and a touch of magic in this stunning middle grade debut. Thirteen-year-old Jack...

Where the Red Fern Grows [Paperback]

MSRP:
Now:
As low as
Was:
For fans of Old Yeller and Shiloh, Where the Red Fern Grows is a beloved classic that captures the powerful bond between man and man’s best friend. Billy has long dreamt of owning not one, but...

What Is a Refugee?

MSRP:
Now:
As low as
Was:
An accessible picture book that oh-so-simply and graphically introduces the term "refugee" to curious young children to help them better understand the world in which they live. Who are refugees?...

It's the Manager: Gallup Finds the Quality of Managers and Team Leaders Is the Single Biggest Factor in Your Organization's Long-Term Success [Hardcover]

MSRP:
Now:
As low as
Was:
While the world’s workplace has been going through extraordinary historical change, the practice of management has been stuck in time for more than 30 years. The new workforce – especially younger...

MSRP:
Now:
As low as
Was:
A novel-in-verse about a young girl coming-of-age and stepping out of the shadow of her former best friend. Perfect for readers of Elizabeth Acevedo and Nikki Grimes. "Mahogany L. Browne's debut...