And Then There Were None [Mass Market Paperback] 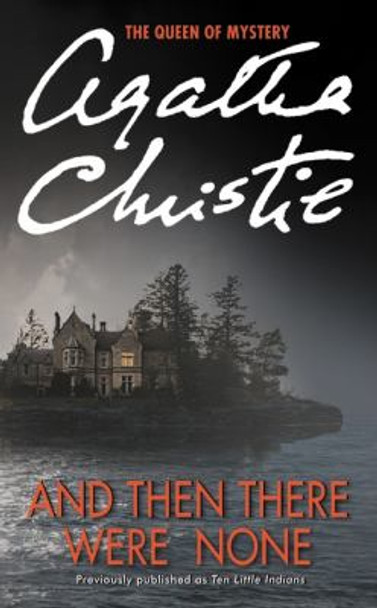 And Then There Were None [Mass Market Paperback]

One of the most famous and beloved mysteries from The Queen of Suspense—Agatha Christie—now a Lifetime TV movie. "Ten . . ." Ten strangers are lured to an isolated island mansion off the Devon coast by a mysterious "U. N. Owen." "Nine . . ." At dinner a recorded message accuses each of them in turn of having a guilty secret, and by the end of the night one of the guests is dead. "Eight . . ." Stranded by a violent storm, and haunted by a nursery rhyme counting down one by one . . . as one by one . . . they begin to die. "Seven . . ." Which among them is the killer and will any of them survive?

The book, And Then There Were None [Bulk, Wholesale, Quantity] ISBN# 9780062073488 in Mass Market Paperback by Christie, Agatha may be ordered in bulk quantities. Minimum starts at 25 copies. Availability based on publisher status and quantity being ordered.
View AllClose

MSRP:
Now:
As low as
Was:
Read Theodore Taylor’s classic bestseller and Lewis Carroll Shelf Award winner The Cay. Phillip is excited when the Germans invade the small island of Curaçao. War has always been a game to him,...

And Then There Were None [Paperback]

MSRP:
Now:
As low as
Was:
One of the most famous and beloved mysteries from The Queen of Suspense—Agatha Christie—now a Lifetime TV movie. "Ten . . ." Ten strangers are lured to an isolated island mansion off the Devon...

MSRP:
Now:
As low as
Was:
There was once a village bred by evil. On the barren coast of Cornwall, England, lived a community who prayed for shipwrecks, a community who lured storm-tossed ships to crash upon the sharp rocks of...

MSRP:
Now:
As low as
Was:
This joyous play, the last comedy of Shakespeare's career, sums up his stagecraft with a display of seemingly effortless skill. Prospero, exiled Duke of Milan, living on an enchanted island, has the...

MSRP:
Now:
As low as
Was:
Now available in a rack-sized edition for older readers--Gaiman's "New York Times" bestselling novel that takes readers over the threshold of imagination. A "Publishers Weekly" Best Book and winner...

MSRP:
Now:
As low as
Was:
At the age of 23, James Frey woke up on a plane to find his front teeth knocked out and his nose broken. He had no idea where the plane was headed nor any recollection of the past two weeks. An...

MSRP:
Now:
As low as
Was:
Can playing dead bring you back to life? Maybe only on Dead Wednesday… On this day the worlds of a shy boy and a gone girl collide, and the connection they make will change them both forever. A...

Eat, Pray, Love: One Woman's Search for Everything Across Italy, India and Indonesia

MSRP:
Now:
As low as
Was:
The 10th anniversary edition of one of the most iconic, beloved, and bestselling books of our time. Elizabeth Gilbert’s Eat Pray Love touched the world and changed countless lives, inspiring and...

The Purpose Driven Life: What on Earth Am I Here For? [Paperback]

MSRP:
Now:
As low as
Was:
This book has transformed millions of lives. Are you ready for a change? Since its release, The Purpose Driven Life has been translated into eighty-five different languages and has become the...

MSRP:
Now:
As low as
Was:
An astonishing technique for recovering and cloning dinosaur DNA has been discovered. Now humankind’s most thrilling fantasies have come true. Creatures extinct for eons roam Jurassic Park with their...

MSRP:
Now:
As low as
Was:
Apocalypse got you down? Whatever you do, don't think about it! "Hilarious would be an understatement to describe this book and I found myself lost for words." - Divine Zape for Readers'...