Aru Shah and the End of Time (Pandava #1) 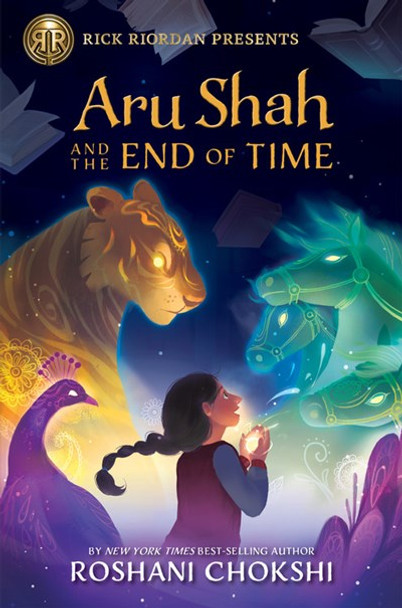 Aru Shah and the End of Time (Pandava #1)

Named one of 100 Best Fantasy Books of All Time by Time magazine!

Twelve-year-old Aru Shah has a tendency to stretch the truth in order to fit in at school. While her classmates are jetting off to family vacations in exotic locales, she'll be spending her autumn break at home, in the Museum of Ancient Indian Art and Culture, waiting for her mom to return from her latest archeological trip. Is it any wonder that Aru makes up stories about being royalty, traveling to Paris, and having a chauffeur?

One day, three schoolmates show up at Aru's doorstep to catch her in a lie. They don't believe her claim that the museum's Lamp of Bharata is cursed, and they dare Aru to prove it. Just a quick light, Aru thinks. Then she can get herself out of this mess and never ever fib again.

But lighting the lamp has dire consequences. She unwittingly frees the Sleeper, an ancient demon whose duty it is to awaken the God of Destruction. Her classmates and beloved mother are frozen in time, and it's up to Aru to save them.

The only way to stop the demon is to find the reincarnations of the five legendary Pandava brothers, protagonists of the Hindu epic poem, the Mahabharata, and journey through the Kingdom of Death. But how is one girl in Spider-Man pajamas supposed to do all that?

The book, Aru Shah and the End of Time (Pandava #1) [Bulk, Wholesale, Quantity] ISBN# 9781368023566 in Paperback by Roshani Chokshi may be ordered in bulk quantities. Minimum starts at 25 copies. Availability based on publisher status and quantity being ordered.
View AllClose

MSRP:
Now:
As low as
Was:
From dinosaurs to the burning of the Library of Alexandra―this thrilling, visually dazzling new series from Matthew Loux is posed to conquer the 21st century. The internship program at the Time...

MSRP:
Now:
As low as
Was:
A hug feels good. Let's hug again. We'll hug at nine. We'll hug at ten. When is it time for a hug? Anytime! This feel-good story—now in paperback—assures kids there's plenty of love to go around the...

End Times: A Brief Guide to the End of the World

MSRP:
Now:
As low as
Was:
What is going to cause our extinction? How can we save ourselves and our future? End Times answers the most important questions facing humankind End Times is a compelling work of skilled reportage...

Too Many Times: How to End Gun Violence in a Divided America

MSRP:
Now:
As low as
Was:
Guns in America have a history. The violence they cause came about from a series of decisions. To reverse them there is a series of solutions. This is your guide to them. Gun violence is a problem...

MSRP:
Now:
As low as
Was:
Storybook characters collide in this first book in a new trilogy of twisted fairy tales from New York Times bestselling author James Riley, set in the world of his popular Half Upon a Time...

MSRP:
Now:
As low as
Was:
A new middle-grade Fantasy series packed with action and adventure, perfect for fans of Rick Riordan and Soman Chainani. From New York Times bestselling author comes a world packed with action...

MSRP:
Now:
As low as
Was:
Mysterious, cunning, smart, and sleek, foxes are one of kids' favorite animals. Learn all about this fantastic forest canine! Packed with beautiful and engaging photos, this new leveled reader...

MSRP:
Now:
As low as
Was:
Can Astronaut Girl save the day with a little help from science? Find out as she and her space crew make their debut in this chapter book series! Val, aka Astronaut Girl, is just your typical...

MSRP:
Now:
As low as
Was:
When books come alive! A classic Waldo adventure enjoys a refreshed cover — plus two new pages of searches. Where is Waldo off to now? Into a world of dreams and fantasies, of swarming scenes that...

MSRP:
Now:
As low as
Was:
There's only one you in this great big world. Make it a better place! Adri's mama and papa share with their eager son some of the wisdom they have gained through the years. Their words, simple and...

Diary of a Wimpy Kid Box of Books

Mrs. Frisby and the Rats of NIMH

MSRP:
Now:
As low as
Was:
Some extraordinary rats come to the aid of a mouse family in this Newbery Medal Award-winning classic by notable children's author Robert C. O'Brien. Mrs. Frisby, a widowed mouse with four small...

Redefining Realness: My Path to Womanhood, Identity, Love & So Much More

From Reopen to Reinvent: (Re)Creating School for Every Child

MSRP:
Now:
As low as
Was:
In From Reopen to Reinvent, distinguished education strategist Michael B. Horn delivers a provocative and eye-opening call to action for the overthrow of an education system that is not working well...