Ashes (The Seeds of America Trilogy) 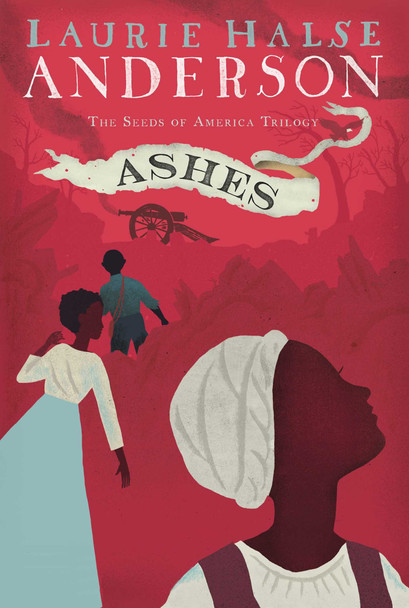 Ashes (The Seeds of America Trilogy)

Return to the American Revolution in this blistering conclusion to the trilogy that began with the bestselling National Book Award Finalist Chains and continued with Forge, which The New York Times called “a return not only to the colonial era but to historical accuracy.” As the Revolutionary War rages on, Isabel and Curzon have narrowly escaped Valley Forge—but their relief is short-lived. Before long they are reported as runaways, and the awful Bellingham is determined to track them down. With purpose and faith, Isabel and Curzon march on, fiercely determined to find Isabel’s little sister Ruth, who is enslaved in a Southern state—where bounty hunters are thick as flies. Heroism and heartbreak pave their path, but Isabel and Curzon won’t stop until they reach Ruth, and then freedom, in this grand finale to the acclaimed Seeds of America trilogy from Laurie Halse Anderson.

The book, Ashes (The Seeds of America Trilogy) [Bulk, Wholesale, Quantity] ISBN# 9781416961468 in Hardcover by Laurie Halse Anderson may be ordered in bulk quantities. Minimum starts at 25 copies. Availability based on publisher status and quantity being ordered.
View AllClose

Chains (The Seeds of America Trilogy)

MSRP:
Now:
As low as
Was:
If an entire nation could seek its freedom, why not a girl? As the Revolutionary War begins, thirteen-year-old Isabel wages her own fight...for freedom. Promised freedom upon the death of their...

No Ashes in the Fire: Coming of Age Black and Free in America

MSRP:
Now:
As low as
Was:
From a leading journalist and activist comes a brave, beautifully wrought memoir. When Darnell Moore was fourteen years old, three boys from his neighborhood tried to set him on fire. They cornered...

No Ashes in the Fire: Coming of Age Black and Free in America [Paperback]

MSRP:
Now:
As low as
Was:
From a leading journalist and activist comes a brave, beautifully wrought memoir. When Darnell Moore was fourteen, three boys from his neighborhood tried to set him on fire. They cornered him while...

MSRP:
Now:
As low as
Was:
“This taut and terrifying book is among the most closely observed accounts of Donald J. Trump’s shambolic tenure in office to date." - Dwight Garner, The New York Times Washington Post national...

Stories of the Prophets in the Holy Quran

MSRP:
Now:
As low as
Was:
This inspiring collection of illustrated stories offers an Islamic take on the lives and missions of familiar prophets. Through these Islamic renditions, children are made keenly aware of the...

MSRP:
Now:
As low as
Was:
In 1987, Dr. Benjamin Carson gained worldwide recognition for his part in the first successful separation of Siamese twins joined at the back of the head. Carson pioneered again in a rare procedure...

MSRP:
Now:
As low as
Was:
Putting tariffs on imported goods or setting other barriers to international trade can be tempting for politicians. They assume that many of their constituents believe that free trade is not fair...

The Riches of This Land: The Untold, True Story of America's Middle Class

MSRP:
Now:
As low as
Was:
This vivid character-driven narrative, fused with important new economic and political reporting and research, busts myths about middle class decline and points the way to its revival. For over a...

Workparent: The Complete Guide to Succeeding on the Job, Staying True to Yourself, and Raising Happy Kids

MSRP:
Now:
As low as
Was:
An all-in-one resource for every working mother and father. Sure, there are plenty of parenting books out there. But as working moms and dads, we've never had a trusted, go-to guide all our...