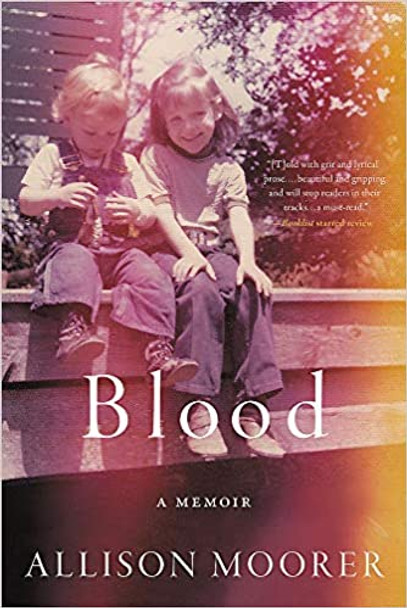 The Grammy and Academy Award-nominated singer-songwriter's haunting, lyrical memoir, sharing the story of an unthinkable act of violence and ultimate healing through art.

1986, Mobile, Alabama. A 14-year-old girl is awakened by the unmistakable sound of gunfire. On the front lawn, her father has shot and killed her mother before turning the gun on himself. Allison Moorer would grow up to be an award-winning musician, with her songs likened to "a Southern accent: eight miles an hour, deliberate, and very dangerous to underestimate" (Rolling Stone). Now, Allison turns her lyrical storytelling powers to recount the events leading up to the moment that forever altered her own life and that of her older sister, Shelby, with whom she shares an unbreakable bond. Gorgeously written, Blood delves into the meaning of inheritance and destiny, shame and trauma - and how it is possible to carve out a safe place in the world despite it all.

With a foreword by Grammy winner Shelby Lynne, Blood is a familial Just Kids that reads like an intimate journal - vivid, haunting, and, ultimately, life-affirming.

The book, Blood: A Memoir [Bulk, Wholesale, Quantity] ISBN# 9780306922695 in Paperback by Allison Moorer may be ordered in bulk quantities. Minimum starts at 25 copies. Availability based on publisher status and quantity being ordered.
View AllClose

MSRP:
Now:
As low as
Was:
The Grammy- and Academy Award- nominated singer-songwriter's haunting, lyrical memoir, sharing the story of an unthinkable act of violence and ultimate healing through art. 1986, Mobile, Alabama. A...

MSRP:
Now:
As low as
Was:
Bestselling author Lorna Sage delivers the tragicomic memoirof her escape from a claustrophobic childhood in post-WWII Britain—and thestory of the weddings and relationships that defined three...

The Water Is Wide: A Memoir [Paperback]

MSRP:
Now:
As low as
Was:
The island is nearly deserted, haunting, beautiful. Across a slip of ocean lies South Carolina. But for the handful of families on Yamacraw island, America is a world away. For years the people here...

MSRP:
Now:
As low as
Was:
A fearless debut memoir in which beloved and bestselling How to Raise an Adult author Julie Lythcott-Haims pulls no punches in her recollections of growing up a black woman in America “Courageous,...

MSRP:
Now:
As low as
Was:
The standout memoir from NBA powerhouse Andre Iguodala, the indomitable sixth man of the champion Golden State Warriors. Andre Iguodala is one of the most admired players in the NBA. And fresh off...

The Picture of Dorian Gray and Other Writings [Mass Market Paperback]

MSRP:
Now:
As low as
Was:
Flamboyant and controversial, Oscar Wilde was a dazzling personality, a master of wit, and a dramatic genius whose sparkling comedies contain some of the most brilliant dialogue ever written for the...

Angels in America: A Gay Fantasia on National Themes (Revised)

MSRP:
Now:
As low as
Was:
Winner of the Pulitzer Prize for Drama Angels in America: A Gay Fantasia on National Themes includes Part One, Millennium Approaches and Part Two, Perestroika “Glorious. A monumental, subversive,...

MSRP:
Now:
As low as
Was:
Napoleon Hill's life changing philosophy of success, originally published in 1937, has sold millions of copies and changed just as many lives. His simple, revolutionary "13 Steps to Riches" form a...

MSRP:
Now:
As low as
Was:
A book that illuminates that no matter how different we feel, we are all more similar than we at first appear. This is not a story about a heron or a robot or a chicken but an ordinary boy with daily...