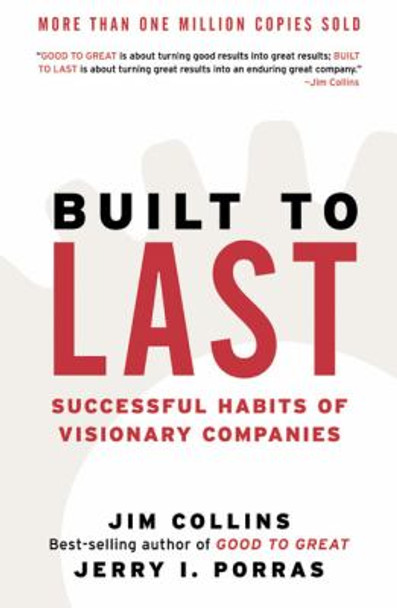 MSRP:
Now: List Price $32.50
Was:
— You save
Hardcover
This product qualifies for FREE US Ground Shipping on orders over $100.

"This is not a book about charismatic visionary leaders. It is not about visionary product concepts or visionary products or visionary market insights. Nor is it about just having a corporate vision. This is a book about something far more important, enduring, and substantial. This is a book about visionary companies." So write Jim Collins and Jerry Porras in this groundbreaking book that shatters myths, provides new insights, and gives practical guidance to those who would like to build landmark companies that stand the test of time. Drawing upon a six-year research project at the Stanford University Graduate School of Business, Collins and Porras took eighteen truly exceptional and long-lasting companies -- they have an average age of nearly one hundred years and have outperformed the general stock market by a factor of fifteen since 1926 -- and studied each company in direct comparison to one of its top competitors. They examined the companies from their very beginnings to the present day -- as start-ups, as midsize companies, and as large corporations. Throughout, the authors asked: "What makes the truly exceptional companies different from other companies?" What separates General Electric, 3M, Merck, Wal-Mart, Hewlett-Packard, Walt Disney, and Philip Morris from their rivals? How, for example, did Procter & Gamble, which began life substantially behind rival Colgate, eventually prevail as the premier institution in its industry? How was Motorola able to move from a humble battery repair business into integrated circuits and cellular communications, while Zenith never became dominant in anything other than TVs? How did Boeing unseat McDonnell Douglas as the world's best commercial aircraft company -- what did Boeing have that McDonnell Douglas lacked? By answering such questions, Collins and Porras go beyond the incessant barrage of management buzzwords and fads of the day to discover timeless qualities that have consistently distinguished out-standing companies. They also provide inspiration to all executives and entrepreneurs by destroying the false but widely accepted idea that only charismatic visionary leaders can build visionary companies.

The book, Built to Last: Successful Habits of Visionary Companies [Bulk, Wholesale, Quantity] ISBN# 9780060566104 in Hardcover by Collins, Jim; Porras, Jerry I. may be ordered in bulk quantities. Minimum starts at 25 copies. Availability based on publisher status and quantity being ordered.
View AllClose

MSRP:
Now:
As low as
Was:
Now you can join the hundreds of thousands of salespeople who have followed Stephen Schiffman's advice and watch your performance soar.... The book, The 25 Sales Habits of Highly Successful...

The Secrets of Successful Selling Habits

MSRP:
Now:
As low as
Was:
Get coached by the master - Zig Ziglar - in what he calls "the proud profession!" Zig Ziglar has been called the man who helped turn selling into a profession to be proud of. In this important book,...

Good Profit: How Creating Value for Others Built One of the World's Most Successful Companies

MSRP:
Now:
As low as
Was:
THE REVOLUTIONARY MANAGEMENT SYSTEM BEHIND ONE OF THE MOST SUCCESSFUL COMPANIES OF OUR TIME In 1961, Charles Koch joined his father’s Wichita-based company, then valued at $21 million. Six years...

The Living Company: Habits for Survival in a Turbulent Business Environment

MSRP:
Now:
As low as
Was:
Most companies do not survive the upheavals of change and competition over the long haul. But there are a few remarkable firms that have withstood the test of several centuries. What hidden lessons...

MSRP:
Now:
As low as
Was:
Drawing upon a six-year research project at the Stanford University Graduate School of Business, James C. Collins and Jerry I. Porras took eighteen truly exceptional and long-lasting companies and...

Sell It Like Serhant: How to Sell More, Earn More, and Become the Ultimate Sales Machine [Hardcover]

MSRP:
Now:
As low as
Was:
Ryan Serhant is the very confident guy who wears stellar suits, has a driver, and regularly closes seven-figure deals on Bravo's hit series Million Dollar Listing: New York. On his reality show Sell...

Change It!: Solids, Liquids, Gases and You (Primary Physical Science)

MSRP:
Now:
As low as
Was:
This book in the Primary Physical Science series is full of surprising facts and hands-on activities to help kids explore solids, liquids and gases. The book, Change It!: Solids, Liquids, Gases and...

MSRP:
Now:
As low as
Was:
This stunning, color-illustrated guide includes practices to help you let go of everyday stresses and find inner peace. With practical tools, strategies and exercises harnessing the benefits of...

If a Tree Falls at Lunch Period

MSRP:
Now:
As low as
Was:
Kirsten's parents are barely speaking to each other, and her best friend has fallen under the spell of the school's queen bee, Brianna. It seems like only Kirsten's younger science-geek sister is on...

The Last Thing He Told Me

MSRP:
Now:
As low as
Was:
A deeply honest investigation of what it means to be a woman and a commodity from Emily Ratajkowski, the archetypal, multi-hyphenate celebrity of our time. Emily Ratajkowski is an acclaimed model and...

Harold and the Purple Crayon [Paperback]

MSRP:
Now:
As low as
Was:
Share this timeless classic with a new generation of readers! "One evening, after thinking it over for some time, Harold decided to go for a walk in the moonlight." Armed only with an oversized...

MSRP:
Now:
As low as
Was:
With a preface by Keegan-Michael Key In the vein of Notorious RBG, seventeen writers explore the multiple meanings of a young Latina politician who has already made history. From the moment...