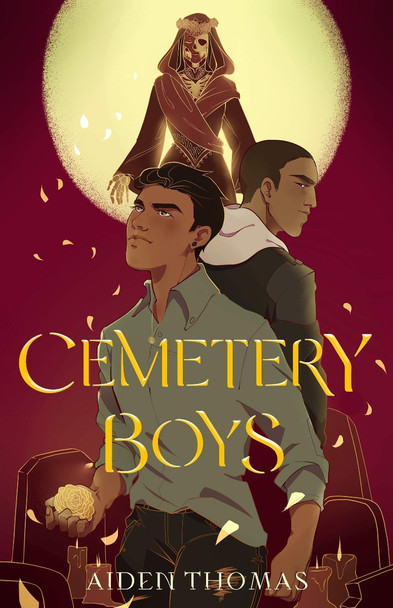 A trans boy determined to prove his gender to his traditional Latinx family summons a ghost who refuses to leave in Aiden Thomas's paranormal YA debut Cemetery Boys.

Yadriel has summoned a ghost, and now he can't get rid of him.

When his traditional Latinx family has problems accepting his true gender, Yadriel becomes determined to prove himself a real brujo. With the help of his cousin and best friend Maritza, he performs the ritual himself, and then sets out to find the ghost of his murdered cousin and set it free.

However, the ghost he summons is actually Julian Diaz, the school's resident bad boy, and Julian is not about to go quietly into death. He's determined to find out what happened and tie off some loose ends before he leaves. Left with no choice, Yadriel agrees to help Julian, so that they can both get what they want. But the longer Yadriel spends with Julian, the less he wants to let him leave.

The book, Cemetery Boys [Bulk, Wholesale, Quantity] ISBN# 9781250250469 in Hardcover by Aiden Thomas may be ordered in bulk quantities. Minimum starts at 25 copies. Availability based on publisher status and quantity being ordered.
View AllClose

MSRP:
Now: $16.99
Was:
Darkus Cuttle's dad mysteriously goes missing from his job as Director of Science at the Natural History Museum. Vanished without a trace! From a locked room! So Darkus moves in with his eccentric...

MSRP:
Now: $29.95
Was:
Based on an extensive worldwide study, this book reveals what gets boys excited about learning Reaching Boys, Teaching Boys challenges the widely-held cultural impression that boys are stubbornly...

MSRP:
Now: $28.99
Was:
"An ode to excellence. An inspiring read for every American." —Robert M. Gates An extraordinary journey behind the scenes of Arlington National Cemetery, Senator Tom Cotton’s Sacred Duty offers an...

MSRP:
Now: $14.95
Was:
Mateo always assumed he’d make the baseball team with his buddy Jason, but when only Jason makes the team, his mood sinks low. So low, he knows he has to do something about it. But what? What can he...

MSRP:
Now: $16.99
Was:
"A resistance novel for our time." - The New York Times "A hopeful story about recovery, empathy, and the bravery of young people." - Booklist "This well-crafted and suspenseful novel touches on the...

MSRP:
Now: $7.99
Was:
The book, Coral Reefs [ Bulk Wholesale Quantity ] ISBN 082342278X in Paperback by Gibbons, Gail may be ordered in bulk quantities . Bulk book availability based on publisher status and quantity being...

MSRP:
Now: $19.99
Was:
WORK SMARTER, NOT HARDER, with The Princeton Review! This revised 5th edition of our popular ACT practice question compendium contains 1,471 practice problems to help familiarize you with the exam,...

MSRP:
Now: $4.99
Was:
Jack and Annie are ready for their next fantasy adventure in the bestselling middle-grade series—the Magic Tree House! Who wants to vacation next to a volcano? Jack and Annie are about to find out...

MSRP:
Now: $24.99
Was:
At a time when healthcare and medical insurance are more important than ever comes this authoritative, unbiased new volume in the acclaimed Get What’s Yours series. Healthcare expert Philip...

MSRP:
Now: $27.95
Was:
The rules of business are changing dramatically. The Aspen Institute's Judy Samuelson describes the profound shifts in attitudes and mindsets that are redefining our notions of what constitutes...