Chutzpah: Why Israel Is a Hub of Innovation and Entrepreneurship 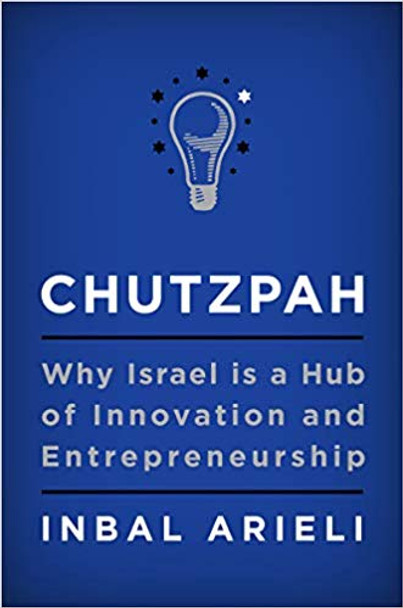 Chutzpah: Why Israel Is a Hub of Innovation and Entrepreneurship

Discover the secret behind how Israel, a tiny country with the highest concentration of start-ups per capita worldwide, is raising generations of entrepreneurs who are disrupting markets around the globe and bringing change to the world.

Dubbed “Silicon Wadi,” Israel ranks third in the World Economic Forum Innovation Rating. Despite its small size, it attracts more venture capital per capita than any other country on the planet. What factors have led to these remarkable achievements, and what secrets do Israeli tech entrepreneurs know that others can learn?

Tech insider Inbal Arieli goes against the common belief that Israel’s outstanding economic accomplishments are the byproduct of its technologically advanced military or the result of long-standing Jewish traditions of study and questioning. Rather, Arieli gives credit to the unique way Israelis are raised in a culture that supports creative thinking and risk taking. Growing up within a tribal-like community, Israelis experience childhoods purposely shaped by challenges and risks—in a culture that encourages and rewards chutzpah. This has helped Israelis develop the courage to pursue unorthodox, and often revolutionary, approaches to change and innovation and is the secret behind the country’s economic success.

While chutzpah has given generations of Israelis the courage to break away from conventional thinking, the Israeli concept balagan—messiness in Hebrew—is at the root of how Israelis are taught to interact with the world. Instead of following strict rules, balagan fosters ambiguity, encouraging the development of the skills necessary for dealing with the unpredictability of life and business. Living with balagan provides Israelis with the opportunity to constantly practice the soft skills defined by the World Economic Forum as the Skills for the Future, as balagan promotes creativity, problem-solving, and independence—key characteristics of successful entrepreneurs.

By revealing the unique ways in which Israelis parent, educate and acculturate, Chutzpah offers invaluable insights and proven strategies for success to aspiring entrepreneurs, parents, executives, innovators, and policymakers.

The book, Chutzpah: Why Israel Is a Hub of Innovation and Entrepreneurship [Bulk, Wholesale, Quantity] ISBN# 9780062883032 in Hardcover by Inbal Arieli may be ordered in bulk quantities. Minimum starts at 25 copies. Availability based on publisher status and quantity being ordered.
View AllClose

Grow from Within: Mastering Corporate Entrepreneurship and Innovation

MSRP:
Now: $29.95
Was:
A hands-on guide to driving new growth through corporate.entrepreneurship ..It is a well-known fact among corporate managers and executives that the way to combat commoditization or disruption of...

The Smartest Places on Earth: Why Rustbelts Are the Emerging Hotspots of Global Innovation

MSRP:
Now: $17.99
Was:
The remarkable story of how rustbelt cities such as Akron and Albany in the United States and Eindhoven in Europe are becoming the unlikely hotspots of global innovation, where sharing brainpower and...

Innovation on Tap: Stories of Entrepreneurship from the Cotton Gin to Broadway's Hamilton

MSRP:
Now: $27.95
Was:
Innovation on Tap is the story of 300 years of innovation in America told through the eyes of 25 entrepreneurs--living and departed--who have gathered to "talk shop" in an imaginary barroom under the...

How Innovation Works: And Why It Flourishes in Freedom

MSRP:
Now: $29.99
Was:
Building on his national bestseller The Rational Optimist, Matt Ridley chronicles the history of innovation, and how we need to change our thinking on the subject. Innovation is the main event of...

MSRP:
Now: $5.99
Was:
Your little one will love to discover the incredible trucks and things that go inside this bright board book. There are 100 different truck photographs to look at and talk about, and 100 truck names...

The Art of Impossible: A Peak Performance Primer

MSRP:
Now: $28.99
Was:
Bestselling author and peak performance expert Steven Kotler decodes the secrets of those elite performers—athletes, artists, scientists, CEOs and more—who have changed our definition of the...

MSRP:
Now: $27.95
Was:
The rules of business are changing dramatically. The Aspen Institute's Judy Samuelson describes the profound shifts in attitudes and mindsets that are redefining our notions of what constitutes...

MSRP:
Now: $24.99
Was:
Lead your child into a lifetime love of the Bible with this colorful storybook. With nearly 300 beautiful two-page illustrations to capture even the youngest child's imagination and heart, this vast...

MSRP:
Now: $16.99
Was:
Read along, dig along, sing along! Young paleontologists and dinosaur enthusiasts are invited on a fossil dig, set to the tune of "Here We Go 'Round the Mulberry Bush." Hike the trail, scan the...

MSRP:
Now: $7.99
Was:
The book that started it all! Little House in the Big Woods is the first book in Laura Ingalls Wilder's treasured Little House series, which was based on her life growing up as an American pioneer...

Catechism of the Catholic Church [Paperback]

MSRP:
Now: $12.00
Was:
Here it is -- the first new Catechism of the Catholic Church in more than 400 years, a complete summary of what Catholic throughout the world believe in common. This book is the catechism (the word...