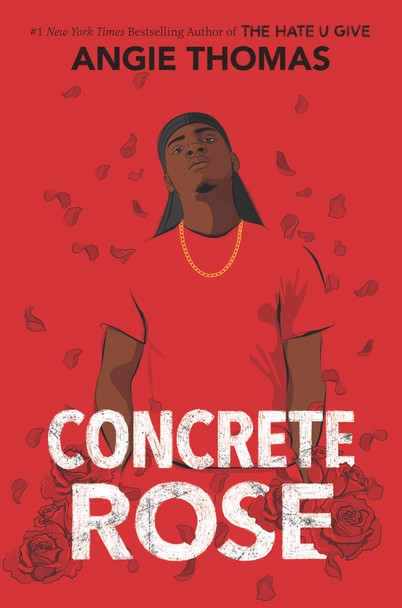 International phenomenon Angie Thomas revisits Garden Heights seventeen years before the events of The Hate U Give in this searing and poignant exploration of Black boyhood and manhood.

If there’s one thing seventeen-year-old Maverick Carter knows, it’s that a real man takes care of his family. As the son of a former gang legend, Mav does that the only way he knows how: dealing for the King Lords. With this money he can help his mom, who works two jobs while his dad’s in prison.

Life’s not perfect, but with a fly girlfriend and a cousin who always has his back, Mav’s got everything under control.

Until, that is, Maverick finds out he’s a father.

Suddenly he has a baby, Seven, who depends on him for everything. But it’s not so easy to sling dope, finish school, and raise a child. So when he’s offered the chance to go straight, he takes it. In a world where he’s expected to amount to nothing, maybe Mav can prove he’s different.

When King Lord blood runs through your veins, though, you can't just walk away. Loyalty, revenge, and responsibility threaten to tear Mav apart, especially after the brutal murder of a loved one. He’ll have to figure out for himself what it really means to be a man.

The book, Concrete Rose [Bulk, Wholesale, Quantity] ISBN# 9780062846716 in Hardcover by Angie Thomas may be ordered in bulk quantities. Minimum starts at 25 copies. Availability based on publisher status and quantity being ordered.
View AllClose

Technically, It's Not My Fault : Concrete Poems

MSRP:
Now:
As low as
Was:
An eleven-year-old boy named Robert voices typical--and not so typical--middle-grade concerns in this unique, memorable collection of hilarious poems.... The book, Technically, It's Not My Fault :...

MSRP:
Now:
As low as
Was:
A 15-year-old girl named Jessie voices typical—and not so typical—teenage concerns in this unique, hilarious collection of poems. Her musings about trying out new makeup and hairstyles, playing...

Concrete Economics: The Hamilton Approach to Economic Growth and Policy

MSRP:
Now:
As low as
Was:
History, not ideology, holds the key to growth. Brilliantly written and argued, Concrete Economics shows how government has repeatedly reshaped the American economy ever since Alexander Hamilton?s...

California Concrete: A Landscape of Skateparks

MSRP:
Now:
As low as
Was:
Southern California is the birthplace of skateboard culture and, even though skateparks may be found worldwide today, it is where these parks continue to flourish as architects, engineers and...

The Rose That Grew from Concrete [Paperback]

MSRP:
Now:
As low as
Was:
His talent was unbounded -- a raw force that commanded attention and respect. His death was tragic -- a violent homage to the power of his voice. His legacy is indomitable -- as vibrant and alive...

Launch Your Career: How Any Student Can Create Relationships with Professionals and Land the Jobs and Internships They Want

MSRP:
Now:
As low as
Was:
Expert career coach Sean O'Keefe shows how students can get their dream job right out of college by building their own professional network from scratch. Students typically spend over 90 percent of...

The Snowball System: How to Win More Business and Turn Clients Into Raving Fans

MSRP:
Now:
As low as
Was:
Mo Bunnell's comprehensive system will help you win more clients, build stronger relationships, and bring in more business. If you're good at doing something, and you need to connect with paying...

The Envoy: From Kabul to the White House, My Journey Through a Turbulent World [Hardcover]

MSRP:
Now:
As low as
Was:
Zalmay Khalilzad grew up in a traditional family in the ancient city of Mazar-i-Sharif, Afghanistan. As a teenager, Khalilzad spent a year as an exchange student in California, where after some...

The Chronicles of Narnia [Paperback]

MSRP:
Now:
As low as
Was:
There are a thousand stories in the land of Narnia.... And now a look for the classic series by C.S Lewis With the upcoming release of the much-anticipated movie of The Chronicles of Narnia: The...