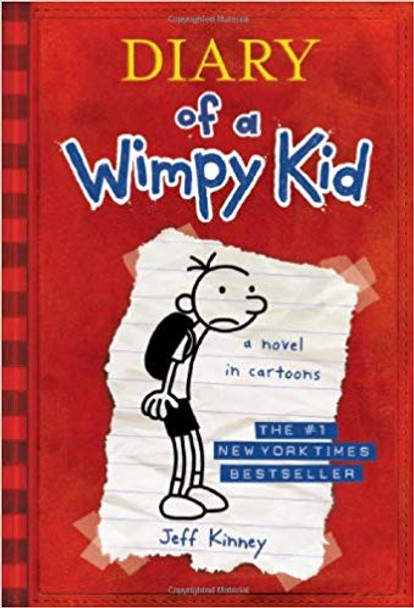 MSRP:
Now: List Price $14.99
Was:
— You save
Hardcover
This product qualifies for FREE US Ground Shipping on orders over $100.

Boys don’t keep diaries―or do they?

It’s a new school year, and Greg Heffley finds himself thrust into middle school, where undersized weaklings share the hallways with kids who are taller, meaner, and already shaving. The hazards of growing up before you’re ready are uniquely revealed through words and drawings as Greg records them in his diary.

In book one of this debut series, Greg is happy to have Rowley, his sidekick, along for the ride. But when Rowley’s star starts to rise, Greg tries to use his best friend’s newfound popularity to his own advantage, kicking off a chain of events that will test their friendship in hilarious fashion.

Author/illustrator Jeff Kinney recalls the growing pains of school life and introduces a new kind of hero who epitomizes the challenges of being a kid. As Greg says in his diary, “Just don’t expect me to be all ‘Dear Diary’ this and ‘Dear Diary’ that.” Luckily for us, what Greg Heffley says he won’t do and what he actually does are two very different things.

Since its launch in May 2004 on Funbrain.com, the Web version of Diary of a Wimpy Kid has been viewed by 20 million unique online readers. This year, it is averaging 70,000 readers a day.

The book, Diary of a Wimpy Kid (Diary of a Wimpy Kid #1) [Bulk, Wholesale, Quantity] ISBN# 9781419741852 in Hardcover by Jeff Kinney may be ordered in bulk quantities. Minimum starts at 25 copies. Availability based on publisher status and quantity being ordered.
View AllClose

This web comic turned novel follows young Greg Heffley as he chronicles his adventures through middle school in a diary his mom buys for him. Here, Greg finds himself thrust among kids who are...

Diary of a Wimpy Kid Box of Books

The Third Wheel (Diary of a Wimpy Kid #7)

MSRP:
Now:
As low as
Was:
Greg Heffley is not willing to be the odd man out. A dance at Greg's middle school has everyone scrambling to find a partner, and Greg is determined not to be left by the wayside. So he concocts a...

MSRP:
Now:
As low as
Was:
Every week, millions of viewers tune in to NBC's American Ninja Warrior, to watch as ninjas from every walk of life attempt to complete a series of iconic obstacles of increasing difficulty in the...

MSRP:
Now:
As low as
Was:
Musical Theatre: A History is a new revised edition of a proven core text for college and secondary school students – and an insightful and accessible celebration of twenty-five centuries of great...

MSRP:
Now:
As low as
Was:
From the beloved bestselling creator of The Dot and our own Happy Dreamer comes an inspiring story about the transformative and profound power of words. A New York Times Bestseller Named an...

MSRP:
Now:
As low as
Was:
The New York Times bestselling author of Soldier Dogs returns with the incredible, true story of K-9 Marine hero Lucca, and the handlers who fought alongside her through two bloody wars in Iraq and...

MSRP:
Now:
As low as
Was:
Veteran podcast creator and strategist Eric Nuzum distills a career’s worth of wisdom, advice, practical information, and big-picture thinking to help podcasters “make noise”—to stand out in this...

National Geographic Kids Mission: Sea Turtle Rescue: All about Sea Turtles and How to Save Them

MSRP:
Now:
As low as
Was:
Inspiring young animal lovers to get up close to sea turtles and the real-life challenges they face is what Mission: Sea Turtle Rescue is all about. Kids can connect their love of animals with their...

MSRP:
Now:
As low as
Was:
One of our most beloved comedians, the brilliantly witty and outspoken star of The View, hits the most unpopular President ever elected where it hurts—and makes us laugh and cheer—in this hilarious...