Dying of Politeness: A Memoir 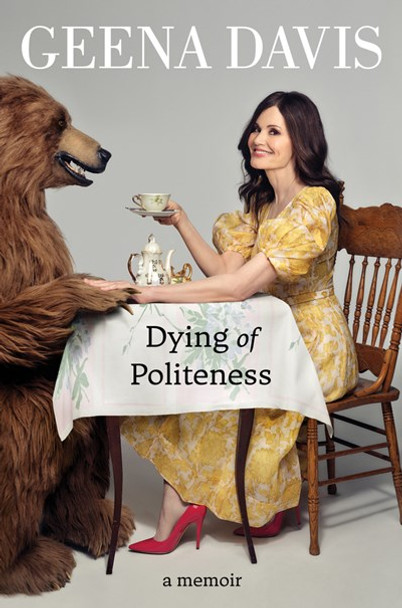 Dying of Politeness: A Memoir

From two-time Academy Award winner and screen icon Geena Davis, the surprising tale of her “journey to badassery”—from her epically polite childhood to roles that loaned her the strength to become a powerhouse in Hollywood.

At three years old, Geena Davis announced she was going to be in movies. Now, with a slew of iconic roles and awards under her belt, she has surpassed her childhood dream—but the path to finding yourself never did run smoothly. In this simultaneously hilarious and candid memoir, Davis regales us with tales of a career playing everything from an amnesiac assassin to the parent of a rodent, her eccentric childhood, her relationships, and helping lead the way to gender parity in Hollywood—all while learning to be a little more badass, one role at a time. Dying of Politeness is a touching account of one woman’s journey to fight for herself, and ultimately fighting for women all around the globe.

The book, Dying of Politeness: A Memoir [Bulk, Wholesale, Quantity] ISBN# 9780063119130 in Hardcover by Geena Davis may be ordered in bulk quantities. Minimum starts at 25 copies. Availability based on publisher status and quantity being ordered.
View AllClose

Dying to Meet You

MSRP:
Now:
As low as
Was:
From the age of four, award-winning writer Edwidge Danticat came to think of her uncle Joseph as her “second father,” when she was placed in his care after her parents left Haiti for America. And so...

I'm Not Dying with You Tonight

MSRP:
Now:
As low as
Was:
Over the course of one night, two girls with two very different backgrounds must rely on each other to get through the violent race riot that has enveloped their city. Lena has her killer style, her...

As I Lay Dying [Paperback]

MSRP:
Now:
As low as
Was:
As I Lay Dying is Faulkner’s harrowing account of the Bundren family’s odyssey across the Mississippi countryside to bury Addie, their wife and mother. Narrated in turn by each of the family...

A Lesson before Dying [Paperback]

MSRP:
Now:
As low as
Was:
A Lesson Before Dying, is set in a small Cajun community in the late 1940s. Jefferson, a young black man, is an unwitting party to a liquor store shoot out in which three men are killed; the only...

MSRP:
Now:
As low as
Was:
From the creators of the Academy Award-winning documentary My Octopus Teacher, an immersive journey into the underwater world that inspired it—and holds transformative lessons for us all Craig...

Personal Effects: What Recovering the Dead Teaches Me about Caring for the Living

MSRP:
Now:
As low as
Was:
The owner of the world’s leading disaster management company chronicles the unseen world behind the yellow tape, and explores what it means to be human after a lifetime of caring for the dead. You...

MSRP:
Now:
As low as
Was:
Gemma Gene's adorable comics celebrate fur-parenthood and the extreme love you experience when you look into your dog’s eyes. If you are never alone when you go to the bathroom, are forced to share...

The House of a Million Pets

MSRP:
Now:
As low as
Was:
Ann Hodgman's basement is home to three guinea pigs, a cage full of birds, a big gray rabbit, a prairie dog, a bulbul (look it up), two little rabbits, a hamster, and twenty-six pygmy mice. And...

MSRP:
Now:
As low as
Was:
Catalog Copy: Walt’s Apprentice: Keeping the Disney Dream Alive is the memoir of Disney Legend Dick Nunis. It is a warm personal reminiscence of learning directly from Walt Disney for 12 years,...

Disability Friendly: How to Move from Clueless to Inclusive

MSRP:
Now:
As low as
Was:
Create a true culture of inclusion Although progress has been made around equality for many marginalized groups, people with disabilities are still massively underrepresented in organizations’...

MSRP:
Now:
As low as
Was:
Customer Experience expert Jim Tincher provides the wisdom and tools to show business-to-business (B2B) organizations how to build and sustain superior customer experience (CX) as a core business...

Winning Well: A Manager's Guide to Getting Results---Without Losing Your Soul

Born to Shine: Do Good, Find Your Joy, and Build a Life You Love

MSRP:
Now:
As low as
Was:
This authentic and dynamic memoir from the CEO of Kendra Scott Jewelry delivers inspiration, leadership lessons, and spellbinding storytelling. For twenty years, Kendra Scott built her eponymous...