Earth from Above, Updated Edition 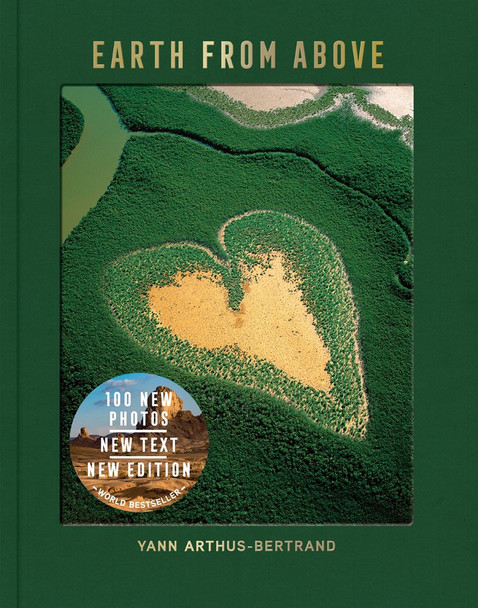 Earth from Above, Updated Edition

MSRP:
Now: List Price $75.00
Was:
— You save
Hardcover
This product qualifies for FREE US Ground Shipping on orders over $100.

Since its original publication in 1999, Earth from Above has been a touchstone for the environmental movement, selling more than three million copies worldwide. After multiple journeys across five continents and sixty countries, acclaimed aerial photographer Yann Arthus-Bertrand created a comprehensive, unforgettable survey of the earth from a spectacular vantage point. For almost two decades, Arthus-Bertrand has continued to travel and photograph the planet, collecting new material that has never been published. In this updated edition, he reveals more than 100 new images and presents essays on current environmental and humanitarian issues by esteemed experts, including Nicholas Stern, Jane Goodall, Runa Khan, and Mathieu Ricard. With thrilling new photography, essays, and revisions throughout, Earth from Above is an up-to-date portrait of our world that poignantly juxtaposes evidence of humanity’s destructive impact with the planet’s raw beauty.

The book, Earth from Above, Updated Edition [Bulk, Wholesale, Quantity] ISBN# 9781419722844 in Hardcover by Yann Arthus-Bertrand may be ordered in bulk quantities. Minimum starts at 25 copies. Availability based on publisher status and quantity being ordered.
View AllClose

MSRP:
Now:
As low as
Was:
From space, Earth is a magnificent sight, splashed with vivid colors, patterns, textures, and abstract forms. Views from above can also provide telling information about the health of our planet. To...

The New Earth from Above: 365 Days (Updated, Revised)

MSRP:
Now:
As low as
Was:
The New Earth From Above: 365 Days is now fully revised and updated. Reaching across the continents, from the icebergs of Antarctica to the cotton fields of India, the breathtaking, full-color...

MSRP:
Now:
As low as
Was:
From one of the world's preeminent experts on reading and dyslexia, the most comprehensive, up-to-date, and practical book available on identifying, understanding, and overcoming reading...

A Choice Not an Echo: Updated and Expanded 50th Anniversary Edition

MSRP:
Now:
As low as
Was:
Over 3 Million Copies Sold! Celebrate 50 years since the release of Phyllis Schlafly's monumental A Choice Not an Echo, the book that launched the conservative resurgence of the late 20th century...

MSRP:
Now:
As low as
Was:
A visual ode to the transformative power of the houseplant in home décor, with practical information for arranging your own indoor green For centuries, plants have transformed interiors. Today the...

The Hidden Habits of Genius: Beyond Talent, IQ, and Grit--Unlocking the Secrets of Greatness

MSRP:
Now:
As low as
Was:
“An unusually engaging book on the forces that fuel originality across fields.” --Adam Grant Looking at the 14 key traits of genius, from curiosity to creative maladjustment to obsession, Professor...

MSRP:
Now:
As low as
Was:
An instant classic of American sportswriting—the tennis essays of David Foster Wallace, “the best mind of his generation” (A. O. Scott) and “the best tennis-writer of all time” (New York Times) ...

MSRP:
Now:
As low as
Was:
It's 1863 and dinosaurs roam the streets of New York as the Civil War rages between raptor-mounted armies down South. Magdalys Roca and her friends from the Colored Orphan Asylum are on a field trip...

The Problem with Everything: My Journey Through the New Culture Wars

MSRP:
Now:
As low as
Was:
In the fall of 2016, acclaimed author Meghan Daum began working on a book about the excesses of contemporary feminism. With Hillary Clinton soon to be elected, she figured even the most fiercely...

MSRP:
Now:
As low as
Was:
In this kids' biography, discover the amazing life story of Alexander Hamilton, Founding Father of the United States whose work as an American statesman and strong personality made him an icon of...