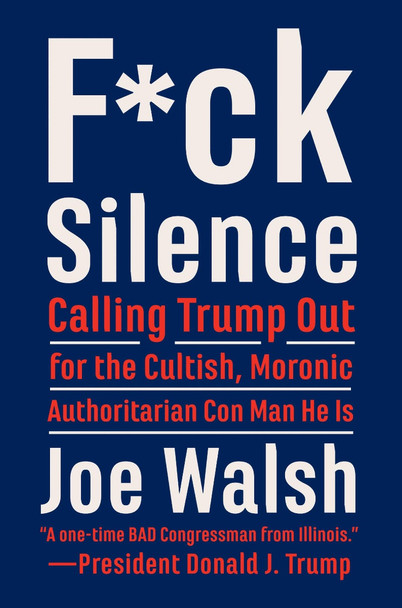 Donald Trump is the exact threat our Founding Fathers feared.

Joe Walsh is as rock-ribbed a conservative as they come. But he believes that no right-wing policy victory is worth the loss of our very democracy.

In this clear-eyed and unsparing book, Walsh makes the case that Trump has more in common with the foreign dictators he praises publicly than a predecessor like Ronald Reagan. Trump is an existential threat to conservatism, the presidency, and national unity. He has violated the Constitution in plain sight, assaulted democratic institutions, overwhelmed the country with disinformation, erected around himself a cult of personality, and governed according to his narcissism more than any discernable political philosophy.

Though Walsh agrees with Trump that the Washington elite has hung working-class America out to dry, traveling down the road to despotism is no response. And now a person who places himself above the rule of law and accountability sits in the Oval Office—all that’s missing is a big, beautiful throne behind the Resolute Desk.

In F*ck Silence, Walsh challenges his countrymen, especially his fellow conservatives, to acknowledge and oppose this unpatriotic and un-American behavior before we give away what made America great in the first place: our democracy.

The book, F*ck Silence: Calling Trump Out for the Cultish, Moronic, Authoritarian Con Man He Is [Bulk, Wholesale, Quantity] ISBN# 9780063010024 in Hardcover by Joe Walsh may be ordered in bulk quantities. Minimum starts at 25 copies. Availability based on publisher status and quantity being ordered.
View AllClose

Trump Is F*cking Crazy: (This Is Not a Joke)

Will He Go?: Trump and the Looming Election Meltdown in 2020

MSRP:
Now:
As low as
Was:
In advance of the 2020 election, legal scholar Lawrence Douglas prepares readers for a less-than-peaceful transition of power. It doesn't require a strong imagination to get a sense of the mayhem...

MSRP:
Now:
As low as
Was:
What can you hear when you are completely silent? Beautifully illustrated and gently written, Silence encourages children to stop, listen, and reflect on their experiences and the world around them...

Zen as F*ck: A Journal for Practicing the Mindful Art of Not Giving a Sh*t (Zen as F*ck Journals)

MSRP:
Now:
As low as
Was:
Monica Sweeney offers the perfect gift of mindfulness with this beautiful, uplifting guided journal for when you just don't give a f*ck. The road to serenity is ahead, and it’s paved with a f*ck-ton...

How to Think Politically: Sages, Scholars and Statesmen Whose Ideas Have Changed the World

MSRP:
Now:
As low as
Was:
A one-stop guide to the "Essential Thinkers" in political philosophy, from Confucius to Marx; this book shines the light of political reason into the darkest corners of our troubled modern times. ...

MSRP:
Now:
As low as
Was:
This exciting new coloring book offers dozens of heavy detailed, highly decorative pen and ink illustrations of flower-adorned animals. Each beautifully stylized creature is embellished with...

How to Fall in Love with Anyone: A Memoir in Essays

MSRP:
Now:
As low as
Was:
“A beautifully written and well-researched cultural criticism as well as an honest memoir” (Los Angeles Review of Books) from the author of the popular New York Times essay, “To Fall in Love with...

Let's Taco about How Great You Are

MSRP:
Now:
As low as
Was:
A pun-filled, fun-filled food-filled gift book celebrating YOU! Ideal for graduation or any time a kid is celebrated. Hey, kid, let's TACO about how great you are. DONUT how you do it. You always...

MSRP:
Now:
As low as
Was:
Organizational change doesn't have to be so difficult. Leading change expert Jake Jacobs shares eight fail-safe ways to make any change initiative at any organization easier, faster, and more...