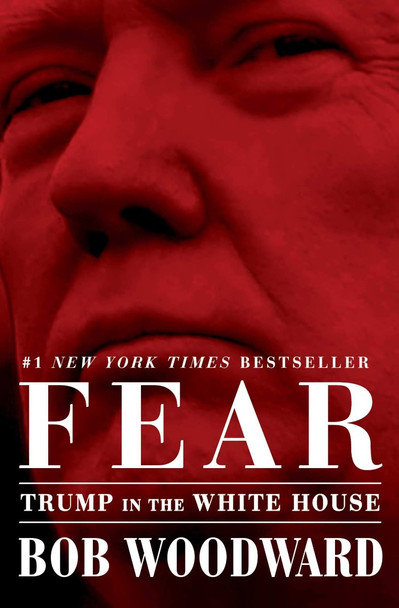 THE INSIDE STORY ON PRESIDENT TRUMP, AS ONLY BOB WOODWARD CAN TELL IT

Fear is the most intimate portrait of a sitting president ever published during the president’s first years in office. The focus is on the explosive debates and the decision-making in the Oval Office, the Situation Room, Air Force One and the White House residence.

Fear presents vivid details of the negotiations between Trump’s attorneys and Robert Mueller, the special counsel in the Russia investigation, laying out for the first time the meeting-by-meeting discussions and strategies. It discloses how senior Trump White House officials joined together to steal draft orders from the president’s Oval Office desk so he would not issue directives that would jeopardize top secret intelligence operations.

“It was no less than an administrative coup d’état,” Woodward writes, “a nervous breakdown of the executive power of the most powerful county in the world.”

The book, Fear: Trump in the White House [Bulk, Wholesale, Quantity] ISBN# 9781501175527 in Paperback by Bob Woodward may be ordered in bulk quantities. Minimum starts at 25 copies. Availability based on publisher status and quantity being ordered.

Unhinged: An Insider's Account of the Trump White House

MSRP:
Now:
As low as
Was:
Few have been a member of Donald Trump’s inner orbit longer than Omarosa Manigault Newman. Their relationship has spanned fifteen years—through four television shows, a presidential campaign, and a...

House of Trump, House of Putin: The Untold Story of Donald Trump and the Russian Mafia

MSRP:
Now:
As low as
Was:
THE NEW YORK TIMES BESTSELLER “The story Unger weaves with those earlier accounts and his original reporting is fresh, illuminating and more alarming than the intelligence channel described in the...

The Trump White House: Changing the Rules of the Game

MSRP:
Now:
As low as
Was:
The unvarnished and unbiased inside story of President Donald Trump and his White House by New York Times bestselling author Ronald Kessler. Based on exclusive interviews with the president and his...

MSRP:
Now:
As low as
Was:
A GRIPPING, FEARLESS EXPLORATION OF MASCULINITY The effects of traditionally defined masculinity have become one of the most prevalent social issues of our time. In this engaging and provocative...

MSRP:
Now:
As low as
Was:
Updated to include the Black Lives Matter movement, the presidency of Barack Obama, the rise of hate speech on the Internet, and more Since the publication of the first edition of Critical Race...

How to Be an Antiracist

MSRP:
Now:
As low as
Was:
From the National Book Award–winning author of Stamped from the Beginning comes a bracingly original approach to understanding and uprooting racism and inequality in our society—and in ourselves. ...