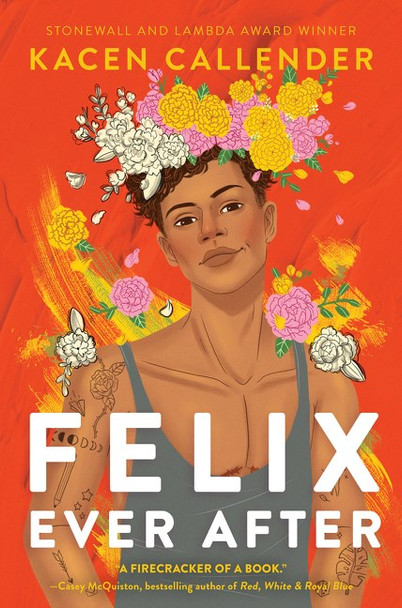 From Stonewall and Lambda Award–winning author Kacen Callender comes a revelatory YA novel about a transgender teen grappling with identity and self-discovery while falling in love for the first time.

Felix Love has never been in love—and, yes, he’s painfully aware of the irony. He desperately wants to know what it’s like and why it seems so easy for everyone but him to find someone. What’s worse is that, even though he is proud of his identity, Felix also secretly fears that he’s one marginalization too many—Black, queer, and transgender—to ever get his own happily-ever-after.

When an anonymous student begins sending him transphobic messages—after publicly posting Felix’s deadname alongside images of him before he transitioned—Felix comes up with a plan for revenge. What he didn’t count on: his catfish scenario landing him in a quasi–love triangle....

But as he navigates his complicated feelings, Felix begins a journey of questioning and self-discovery that helps redefine his most important relationship: how he feels about himself.

Felix Ever After is an honest and layered story about identity, falling in love, and recognizing the love you deserve.

The book, Felix Ever After [Bulk, Wholesale, Quantity] ISBN# 9780062820259 in Hardcover by Kacen Callender may be ordered in bulk quantities. Minimum starts at 25 copies. Availability based on publisher status and quantity being ordered.
View AllClose

The Happily Ever After: A Memoir of an Unlikely Romance Novelist

MSRP:
Now:
As low as
Was:
A journalist's journey through the lands of popular romance lit and a soulful and hilarious memoir about writing a novel about searching for love Is romance dead? Is that why there are so many...

Dream Machine (Craftily Ever After #4)

MSRP:
Now:
As low as
Was:
Bella learns that sometimes following your dreams is easier said than done in this fourth book of the Craftily Ever After chapter book series! Emily Adams, Maddie Wilson, Bella Diaz, and Sam Sharma...

Before the Ever After

MSRP:
Now:
As low as
Was:
National Book Award winner Jacqueline Woodson's stirring novel explores how a family moves forward when their glory days have passed. For as long as ZJ can remember, his dad has been everyone's hero...

Tokyo Ever After: A Novel

MSRP:
Now:
As low as
Was:
A BookPal Staff Pick for May 2021 The Princess Diaries meets Crazy Rich Asians in Emiko Jean’s Tokyo Ever After, a “refreshing, spot-on” (Booklist, starred review) story of an...

Felix Ever After [Paperback]

MSRP:
Now:
As low as
Was:
A Stonewall Honor Book From Stonewall and Lambda Award–winning author Kacen Callender comes a revelatory YA novel about a transgender teen grappling with identity and self-discovery while falling...

The Classic Tales of Brer Rabbit

MSRP:
Now:
As low as
Was:
This Courage Classic is reformatted into a smaller trim size and a lower price sure to make them necessities in any library. Beautiful, rich, and vibrant illustrations accompany these classic tales...

A Partisan's Memoir: Woman of the Holocaust

MSRP:
Now:
As low as
Was:
Faye tells her unforgettable story of heroism, hardship, and resistance. Faye was an ordinary teenager when the Nazis invaded her town on the Russian-Polish border. She had a large, loving family,...

MSRP:
Now:
As low as
Was:
“Boaler is one of those rare and remarkable educators who not only know the secret of great teaching but also know how to give that gift to others.” — CAROL DWECK, author of Mindset “Jo Boaler is...

There's No Plan B for Your A-Game: Be the Best in the World at What You Do

MSRP:
Now:
As low as
Was:
Now in paperback: the Washington Post, Wall Street Journal, USA Today, and Publishers Weekly Bestseller. Can you become the best in the world at what you do? This book shows you how. At nine years...

MSRP:
Now:
As low as
Was:
This Newbery Honor tale is now in paperback! Holling Hoodhood is really in for it. He's just started seventh grade with Mrs. Baker, a teacher he knows is out to get him. Why else would she make him...

MSRP:
Now:
As low as
Was:
A beautiful photo book showcasing more than 50 heroic dogs "in uniform" and their stories, from photographer Liz Stavrinides and author John Schlimm. Extraordinary Dogs portrays more than fifty...

MSRP:
Now:
As low as
Was:
The classic story of a little orphan girl in the Swiss Alps. At the age of five, little orphan Heidi is sent to live with her grandfather in the Alps. Everyone in the village is afraid of him, but...