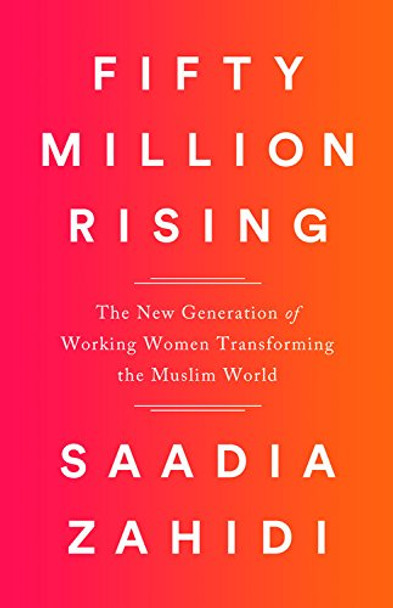 While the news out of the Muslim world has been focused on the threat of extremism from ISIS and Al Qaeda, a quiet but powerful shift has been taking place among women. In the last 10 years alone, nearly 50 million Muslim women have entered the workforce, arming them with more purchasing and earning power and giving them greater autonomy. Saadia Zahidi, a Senior Director at the World Economic Forum, argues that these profound changes will not only empower women; they will also revolutionize and strengthen the economies of their countries. Zahidi documents this revolution through the stories of the remarkable women who are at the forefront of this shift, from McDonald's workers in Pakistan, to middle class software technicians in Egypt, to the heads of global Saudi conglomerates. Zahidi calculates that if female labor participation rose to Western levels, the GDP of many Middle East regions would spike dramatically. The implications are enormous. As businesses learn how to integrate the new female talent pool, their business models will need to adapt to accommodate their new consumers and their new talent. New businesses are already beginning to emerge that cater to women's purchasing power, creating new opportunities for female entrepreneurs, and growing the health, education, food, beverage, and retail sectors that are critical to a diversified, stable economy. At the same time, the new economic and social power of women will force the hands of politicians and policymakers who still consider women second class citizens. Many of these women face a backlash from conservative voices and even members of their families. But because this is an economic revolution, Zahidi argues that it will endure, overcoming cultural mores and forever remaking these societies in ways that we, too, can learn from.

The book, Fifty Million Rising: How a New Generation of Working Women Is Revolutionizing the Muslim Worl [Bulk, Wholesale, Quantity] ISBN# 9781568585901 in Hardcover by Saadia Zahidi may be ordered in bulk quantities. Minimum starts at 25 copies. Availability based on publisher status and quantity being ordered.
View AllClose

Athena Rising: How and Why Men Should Mentor Women

MSRP:
Now:
As low as
Was:
Increasingly, new employees and junior members of any profession are encouraged—sometimes stridently—to “find a mentor!” Four decades of research reveals that the effects of mentorship can be...

The Moment of Lift: How Empowering Women Changes the World

MSRP:
Now:
As low as
Was:
A debut from Forbes' third most powerful woman in the world, Melinda Gates, comes a timely and necessary call to action for women's empowerment. For the last twenty years, Melinda Gates has been on...

The Earth in Her Hands: 75 Extraordinary Women Working in the World of Plants

MSRP:
Now:
As low as
Was:
“An informative and celebratory resource.” —Booklist In this beautiful and empowering book, Jennifer Jewell—host of public radio’s award-winning program and podcast Cultivating Place—introduces 75...

MSRP:
Now:
As low as
Was:
Messenger is the masterful third novel in the Giver Quartet, which began with the dystopian bestseller The Giver, now a major motion picture. Matty has lived in Village and flourished under the...

MSRP:
Now:
As low as
Was:
Feisty Lulu sets out to earn some cash in this illustrated chapter book from children's book legends Judith Viorst and Lane Smith. The stubbornly hilarious Lulu has decided it's time to buckle down...

If You're Happy and You Know It... (Baby Board Books)

MSRP:
Now:
As low as
Was:
This award winning series has been specifically designed for babies. A great introduction to books through well-known nursery rhymes and interactive text. Singing songs and rhymes is the perfect way...

Honda: The Boy Who Dreamed of Cars

MSRP:
Now:
As low as
Was:
The life story of Soichiro Honda, pioneering Japanese businessman and innovative motorcycle and car manufacturer. One day in 1914 when Soichiro Honda was seven years old, an astonishing, moving dust...

MSRP:
Now:
As low as
Was:
Little boys, some as young as 6, spent their long days, not playing or studying, but sorting coal in dusty, loud, and dangerous conditions. Many of these breaker boys worked 10 hours a day, six days...

MSRP:
Now:
As low as
Was:
Master storyteller Rosemary Wells tells the incredible true story of a World War I nurse who brought medical care to the Appalachians Mary Breckinridge, trained as a nurse during World War I, rode on...

MSRP:
Now:
As low as
Was:
M.T. Graves, Pete's favorite writer, is coming to town and will be staying with the Monroes. Chester, of course, is nervous. In Graves's FleshCrawler books, something bad always happens to the pets...

Players: The Story of How Sports Became a Business

MSRP:
Now:
As low as
Was:
“Provocative…terrific stories” (The New Yorker) of the people who transformed sports—in the span of a single generation—from a job that required even top athletes to work in the off-season to make...