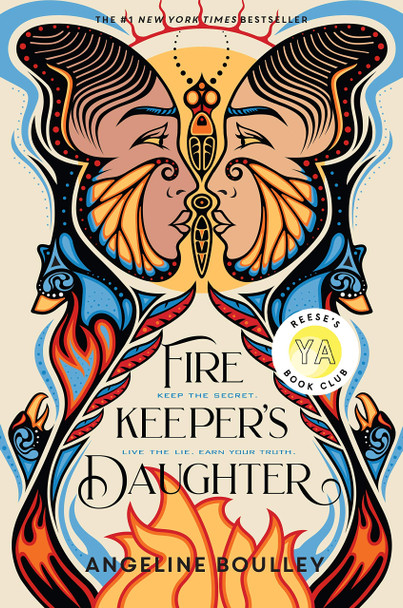 Soon to be adapted at Netflix for TV with President Barack Obama and Michelle Obama's production company, Higher Ground.

“One of this year's most buzzed about young adult novels.” ―Good Morning America

With four starred reviews, Angeline Boulley's debut novel, Firekeeper's Daughter, is a groundbreaking YA thriller about a Native teen who must root out the corruption in her community, perfect for readers of Angie Thomas and Tommy Orange.

Eighteen-year-old Daunis Fontaine has never quite fit in, both in her hometown and on the nearby Ojibwe reservation. She dreams of a fresh start at college, but when family tragedy strikes, Daunis puts her future on hold to look after her fragile mother. The only bright spot is meeting Jamie, the charming new recruit on her brother Levi’s hockey team.

Yet even as Daunis falls for Jamie, she senses the dashing hockey star is hiding something. Everything comes to light when Daunis witnesses a shocking murder, thrusting her into an FBI investigation of a lethal new drug.

Reluctantly, Daunis agrees to go undercover, drawing on her knowledge of chemistry and Ojibwe traditional medicine to track down the source. But the search for truth is more complicated than Daunis imagined, exposing secrets and old scars. At the same time, she grows concerned with an investigation that seems more focused on punishing the offenders than protecting the victims.

Now, as the deceptions―and deaths―keep growing, Daunis must learn what it means to be a strong Anishinaabe kwe (Ojibwe woman) and how far she’ll go for her community, even if it tears apart the only world she’s ever known.

The book, Firekeeper's Daughter [Bulk, Wholesale, Quantity] ISBN# 9781250766564 in Hardcover by Angeline Boulley may be ordered in bulk quantities. Minimum starts at 25 copies. Availability based on publisher status and quantity being ordered.
View AllClose

MSRP:
Now:
As low as
Was:
The Bonesetter's Daughterdramatically chronicles the tortured, devoted relationship between LuLing Young and her daughter Ruth. . . . A strong novel, filled with idiosyncratic, sympathetic...

MSRP:
Now:
As low as
Was:
**A 2020 OWL AWARD LONGLIST WINNER IN THE HIGH SCHOOL CATEGORY**“A compelling story of first love and battling racism with a magical twist.” —Kirkus Reviews (starred...

MSRP:
Now:
As low as
Was:
From Newbery Medalist Jerry Spinelli (Maniac Magee, Stargirl) comes the knockout story of a girl who must come to terms with her mother's death from inside the walls of a prison. Cammie O'Reilly is...

MSRP:
Now:
As low as
Was:
In 1945, Elsie Schmidt is a naive teenager, as eager for her first sip of champagne as she is for her first kiss. She and her family have been protected from the worst of the terror and desperation...

MSRP:
Now:
As low as
Was:
With the bold adventure and brilliant magic that have made him one of fantasy's bestselling authors, R. A. Salvatore continues the epic series that began with Echoes of the Fourth Magic. Join him for...

MSRP:
Now:
As low as
Was:
Nothing in heaven or on earth can stop Me from loving you. Jesus is calling out to our hearts, and you can hear His voice in every story in the Bible. These carefully selected stories are paired...

Between Perfect and Real

MSRP:
Now:
As low as
Was:
A moving YA debut about a trans boy finding his voice—and himself Dean Foster knows he’s a trans guy. He’s watched enough YouTube videos and done enough questioning to be sure. But everyone at his...

A Boy Named Isamu: A Story of Isamu Noguchi

MSRP:
Now:
As low as
Was:
With stunning artwork and heart-singing text, the 2020 winner of the Theodor Seuss Geisel Award brings to life the imagination of Isamu Noguchi. If you are Isamu, stones are the most special of...

I Want to Be a Builder

MSRP:
Now:
As low as
Was:
The Firefly Books young kids' career series: I Want to Be New editions, revised to reflect the increasing diversity in society and changing technology in the lives of people working around...