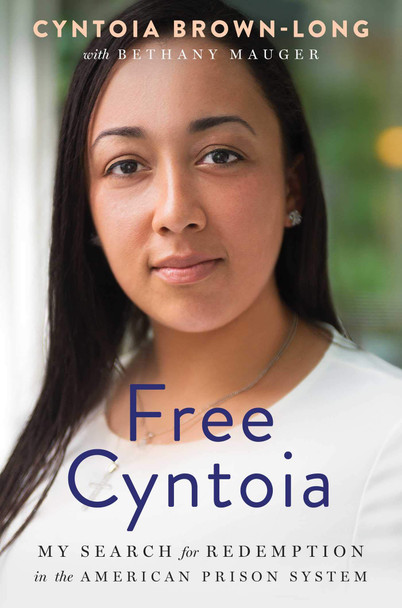 In her own words, Cyntoia Brown shares the riveting and redemptive story of how she changed her life for the better while in prison, finding hope through faith after a traumatic adolescence of drug addiction, rape, and sex trafficking led to a murder conviction.

Cyntoia Brown was sentenced to life in prison for a murder she committed at the age of sixteen. Her case became national news when celebrities and activists made the hashtag #FreeCyntoia go viral in 2017. She was granted full clemency after having served fifteen years, walking out a free woman on August 7, 2019.

This is her story, in her own words.

In these pages, written over the fifteen years she was incarcerated, Cyntoia shares the difficult early life that lead to that fateful night and how she found the strength to not only survive, but thrive, in prison.

A coming-of-age memoir set against the shocking backdrop of a life behind bars, Free Cyntoia takes you on a spiritual journey as Cyntoia struggles to overcome a legacy of family addiction and a lifetime of feeling ostracized and abandoned by society.

Born to a teenage alcoholic mother who was also a victim of sex trafficking, Brown reflects on the isolation, low self-esteem, and sense of alienation that drove her straight into the hands of a predator.

Though she attempts to build a positive path and honor the values her beloved adoptive mother taught her, Cyntoia succumbs to harmful influences that drive her to a cycle of promise and despair. After a fateful meeting with a prison educator turned mentor, Cyntoia makes the pivotal decision to take classes at Lipscomb University and strive for a better future, even if she’s never freed.

For the first time ever, Cyntoia shares the details of her transformation, including a profound encounter with God, an unlikely romance, and an unprecedented outpouring of support from social media advocates and A-list celebrities, which ultimately lead to clemency and her release from prison.

Giving a rare look at the power of love, forgiveness, and self-discovery in the darkest of places, Free Cyntoia is a deeply personal portrait of one woman’s journey for redemption within a system that had failed her from childhood.

The book, Free Cyntoia: My Search for Redemption in the American Prison System [Bulk, Wholesale, Quantity] ISBN# 9781982141110 in Paperback by Cyntoia Brown-Long may be ordered in bulk quantities. Minimum starts at 25 copies. Availability based on publisher status and quantity being ordered.
View AllClose

Writing My Wrongs: Life, Death, and Redemption in an American Prison

MSRP:
Now:
As low as
Was:
In 1991, Shaka Senghor was sent to prison for second-degree murder. Today, he is a lecturer at universities, a leading voice on criminal justice reform, and an inspiration to thousands. In life, it's...

American Prison: A Reporter's Undercover Journey Into the Business of Punishment

MSRP:
Now:
As low as
Was:
New York Times Book Review 10 Best Books of 2018 One of President Barack Obama’s favorite books of 2018 Winner of the Helen Bernstein Book Award for Excellence in Journalism A New York Times...

Free Cyntoia: My Search for Redemption in the American Prison System

MSRP:
Now:
As low as
Was:
In her own words, Cyntoia Brown shares the riveting and redemptive story of how she changed her life for the better while in prison, finding hope through faith after a traumatic adolescence of drug...

MSRP:
Now:
As low as
Was:
A classic account of courage, integrity and most of all, belonging. In 1977, after serving as a leading activist for the democratic dissident movement in the Soviet Union and the movement for free...

My Father Left Me Ireland: An American Son's Search for Home

MSRP:
Now:
As low as
Was:
National Review senior writer Michael Brendan Dougherty delivers a meditation on belonging, fatherhood, and nationalism, through a series of letters to his estranged Irish father. The child of an...

Make Your Brain Work: How to Maximize Your Efficiency, Productivity and Effectiveness 2nd Edition

MSRP:
Now:
As low as
Was:
Do you know how your brain functions? Do you sometimes feel like you're fighting your own brain and habits in order to be productive at work? What if there was a way to work with your brain to become...

MSRP:
Now:
As low as
Was:
Who was the largest baby ever born in the state of Maine? Who dug the Great Lakes? Who gouged out the Grand Canyon? Why, Paul Bunyan, of course, America's finest, fastest, funniest lumberman and...

The Conquest of the Incas

MSRP:
Now:
As low as
Was:
In 1532, the magnificent Inca empire was the last great civilization still isolated from the rest of humankind. The Conquest of the Incas is the definitive history of this civilization’s overthrow,...

Cecil B. DeMille: The Art of the Hollywood Epic

MSRP:
Now:
As low as
Was:
Colossal. Stupendous. Epic. These adjectives, used by movie companies to hawk their wares, became clichés long ago. When used to describe the films of one director, they are accurate. More than any...

Soccer. No other sport in the world captivates a bigger audience -- and no other competition electrifies its fans like the World Cup. Now, just in time for the next World Cup competition, comes a...

MSRP:
Now:
As low as
Was:
The oceans rose, swallowing the lowlands. Earthquakes shattered the continents, toppling entire regions into the rising water. Now, humans live packed into stack cities. The only ones with any space...

MSRP:
Now:
As low as
Was:
Welcome to the Planetarium! Visit the planetarium to discover out-of-this-world exhibits and the people that work here. Explore more than 50 flaps to find out about space travel, the solar system,...

MSRP:
Now:
As low as
Was:
The curiosity, drive, and perseverance of the nineteenth-century woman scientist who pioneered the use of aquariums to study ocean life are celebrated in this gorgeous, empowering picture book...