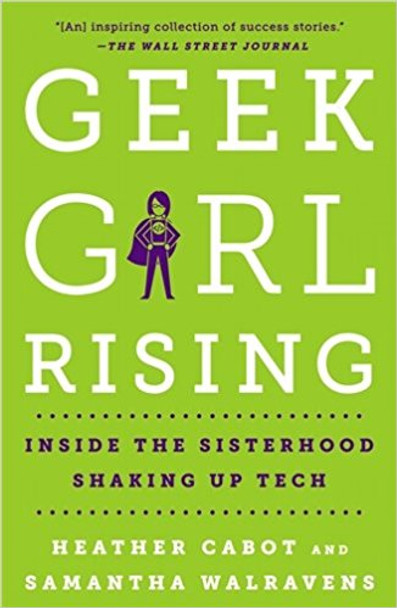 In Geek Girl Rising, Heather Cabot and Samantha Walravens invite women everywhere to join the digital revolution and create the future! "I don’t know much about tech, but I do know that these pioneer women are pretty dope. Geek Girl Rising gives a much needed voice to the fearless women paving an important path in the tech world, while forming a lasting sisterhood along the way.” - Kelly Ripa Meet the women who aren’t asking permission from Silicon Valley to chase their dreams. They are going for it―building cutting-edge tech startups, investing in each other’s ventures, crushing male hacker stereotypes and rallying the next generation of women in tech. With a nod to tech trailblazers like Sheryl Sandberg and Marissa Mayer, Geek Girl Rising introduces readers to the fearless female founders, technologists, and innovators fighting at a grassroots level for an ownership stake in the revolution that’s changing the way we live, work and connect. Readers will meet Debbie Sterling, inventor of GoldieBlox, the first engineering toy for girls, which topples the notion that only boys can build; peek inside the glamorous world of YouTube pioneer Michelle Phan; and tour the headquarters of The Muse, the hottest career site for millennials, led by intrepid co-founder and CEO, Kathryn Minshew. Amid the rising chorus of women speaking out against sexism in technology, media, entertainment and politics, Geek Girl Rising’s message of female solidarity and empowerment is more urgent than ever. Now in paperback, with a new afterword that takes readers inside 2017’s national conversation on sexual harassment, the #MeToo movement, and what’s ahead for women in tech.

The book, Geek Girl Rising: Inside the Sisterhood Shaking Up Tech [Bulk, Wholesale, Quantity] ISBN# 9781250182005 in Paperback by Heather Cabot, Samantha Walravens may be ordered in bulk quantities. Minimum starts at 25 copies. Availability based on publisher status and quantity being ordered.

Geek Girl Rising: Inside the Sisterhood Shaking Up Tech [Hardcover]

The Trophy Kids Grow Up : How the Millennial Generation Is Shaking up the Workplace

MSRP:
Now:
As low as
Was:
The first wave of the Millennial Generation-born between 1980 and 2001-is entering the work force, and employers are facing some of the biggest management challenges they've ever encountered. They...

Girl Rising: Changing the World One Girl at a Time

MSRP:
Now:
As low as
Was:
A gorgeous, full-color oversized book about educating girls across the world inspired by the documentary that Entertainment Weekly says “every mother, sister, daughter, should see, as well as the men...

The Sisterhood of the Traveling Pants

MSRP:
Now:
As low as
Was:
Carmen got the jeans at a thrift shop. They didn't look all that great; they were worn, dirty, and speckled with bleach. On the night before she and her friends part for the summer, Carmen decides to...

Samsung Rising: The Inside Story of the South Korean Giant That Set Out to Beat Apple and Conquer Tech

MSRP:
Now:
As low as
Was:
An explosive exposeÌ of one of the biggest and most secretive companies in the world, Samsung, as the Korean juggernaut battles Apple and Sony to dominate the world of technology Based on years of...

MSRP:
Now:
As low as
Was:
The “work from home” phenomenon is thoroughly explored in this illuminating new book from bestselling 37signals founders Fried and Hansson, who point to the surging trend of employees working from...

No Rules Rules: Netflix and the Culture of Reinvention

MSRP:
Now:
As low as
Was:
**A 2020 OWL AWARD LONGLIST WINNER IN THE MANAGEMENT & CULTURE CATEGORY**Netflix cofounder Reed Hastings reveals for the first time the unorthodox culture behind one of the world's most...

The Secret Lives of Customers: A Detective Story about Solving the Mystery of Customer Behavior

MSRP:
Now:
As low as
Was:
A "detective story" that delivers key insights for any businessperson asking the questions: who really are our customers, why do we lose them, how do we regain them? Mogul William Goldman's zinger...

MSRP:
Now:
As low as
Was:
Drawing on advice from the world’s leading experts on conflict and communication—from relationship scientists to hostage negotiators to diplomats—Ian Leslie, a columnist for the New Statesman, shows...