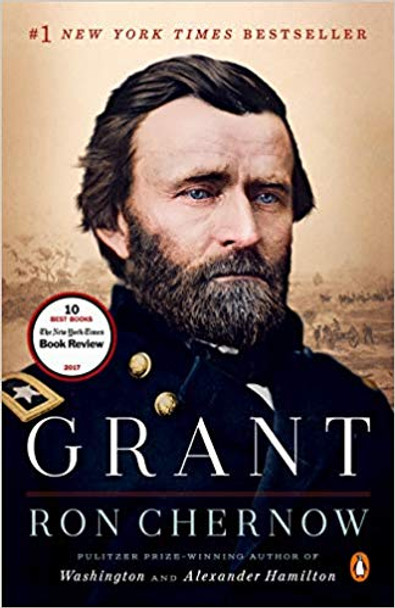 MSRP:
Now: List Price $22.00
Was:
— You save
Paperback
This product qualifies for FREE US Ground Shipping on orders over $100.

Ulysses S. Grant's life has typically been misunderstood. All too often he is caricatured as a chronic loser and an inept businessman, or as the triumphant but brutal Union general of the Civil War. But these stereotypes don't come close to capturing him, as Chernow shows in his masterful biography, the first to provide a complete understanding of the general and president whose fortunes rose and fell with dizzying speed and frequency. Before the Civil War, Grant was flailing. His business ventures had ended dismally, and despite distinguished service in the Mexican War he ended up resigning from the army in disgrace amid recurring accusations of drunkenness. But in war, Grant began to realize his remarkable potential, soaring through the ranks of the Union army, prevailing at the battle of Shiloh and in the Vicksburg campaign, and ultimately defeating the legendary Confederate general Robert E. Lee. Along the way, Grant endeared himself to President Lincoln and became his most trusted general and the strategic genius of the war effort. Grant’s military fame translated into a two-term presidency, but one plagued by corruption scandals involving his closest staff members. More important, he sought freedom and justice for black Americans, working to crush the Ku Klux Klan and earning the admiration of Frederick Douglass, who called him “the vigilant, firm, impartial, and wise protector of my race.” After his presidency, he was again brought low by a dashing young swindler on Wall Street, only to resuscitate his image by working with Mark Twain to publish his memoirs, which are recognized as a masterpiece of the genre. With lucidity, breadth, and meticulousness, Chernow finds the threads that bind these disparate stories together, shedding new light on the man whom Walt Whitman described as “nothing heroic... and yet the greatest hero.” Chernow’s probing portrait of Grant's lifelong struggle with alcoholism transforms our understanding of the man at the deepest level. This is America's greatest biographer, bringing movingly to life one of our finest but most underappreciated presidents. The definitive biography, Grant is a grand synthesis of painstaking research and literary brilliance that makes sense of all sides of Grant's life, explaining how this simple Midwesterner could at once be so ordinary and so extraordinary.

The book, Grant [Bulk, Wholesale, Quantity] ISBN# 9780143110637 in Paperback by Ron Chernow may be ordered in bulk quantities. Minimum starts at 25 copies. Availability based on publisher status and quantity being ordered.
View AllClose

The Only Grant-Writing Book You'll Ever Need (5TH ed.)

MSRP:
Now:
As low as
Was:
Written by two expert authors who have won millions of dollars in government and foundation grants, this is the essential book on securing grants. It provides comprehensive, step-by-step guide for...

MSRP:
Now:
As low as
Was:
Film historian and acclaimed New York Times bestselling biographer Scott Eyman has written the definitive biography of Hollywood legend Cary Grant, one of the most accomplished—and beloved—actors of...

MSRP:
Now:
As low as
Was:
Considered one of Sweden's greatest 20th-century writers, Vilhelm Moberg created Karl Oskar and Kristina Nilsson to portray the joys and tragedies of daily life for early Swedish pioneers in America...

The Ultimate Scholarship Book: Billions of Dollars in Scholarships, Grants and Prizes (2017)

MSRP:
Now:
As low as
Was:
Information on 1.5 million scholarships, grants, and prizes is easily accessible in this revised directory with more than 300 new listings that feature awards indexed by career goal, major,...

MSRP:
Now:
As low as
Was:
America meant "freedom" to the immigrants of the early 1900s-but a freedom very different from what they expected. Cities were crowded and jobs were scare. Children had to work selling newspapers,...

MSRP:
Now:
As low as
Was:
An unprecedented behind-the-scenes portrait of the Trump presidency from the anonymous senior official whose first words of warning about the president rocked the nation's capital. The book, A...

Whoever You Are (Quienquiera Que Seas)

MSRP:
Now:
As low as
Was:
Every day all over the world, children are laughing and crying, playing and learning, eating and sleeping. Their lives may be quite different. But inside, they are all alike. Available for the first...

MSRP:
Now:
As low as
Was:
One of Truman Capote’s last great novels, In Cold Blood has been a must-read since it’s publication in 1965. In Cold Blood was one of the first novels to define the genre of nonfiction, as Capote...

MSRP:
Now:
As low as
Was:
National Indie Bestseller The trailblazing Supreme Court Justice Ruth Bader Ginsburg in her own words. Her most essential writings on gender equality and women's rights, reproductive health care,...

My Name Is Mahtob: The Story That Began the Global Phenomenon Not Without My Daughter Continues

MSRP:
Now:
As low as
Was:
The daughter at the center of the international bestseller Not Without My Daughter completes her story: escaping from Iran, growing up in fear, battling deadly disease, and learning to forgive—now in...

Finding the Words: How to Talk with Children and Teens about Death, Suicide, Homicide, Funerals, Cremation, and Other End-Of-Life Matters

MSRP:
Now:
As low as
Was:
With this compassionate book by respected grief counselor and educator Dr. Alan Wolfelt, readers will find simplified and suitable methods for talking to children and teenagers about sensitive topics...

Failure to Launch: Why Your Twentysomething Hasn't Grown Up...and What to Do About It

MSRP:
Now:
As low as
Was:
From an expert in adolescent psychology comes a groundbreaking, timely, and necessary guide for parents of the 2.2 million young adults in America who are struggling to find their way in the world...