Grateful American: A Journey from Self to Service 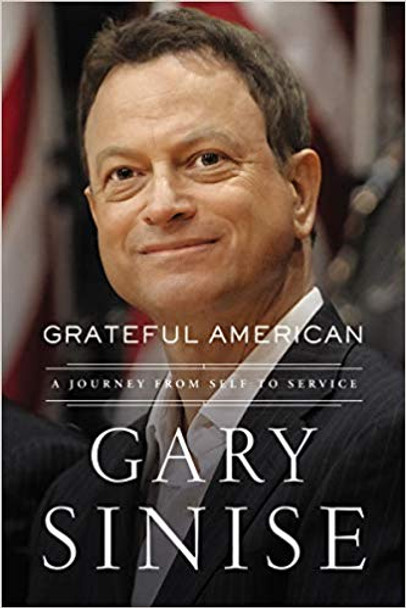 Grateful American: A Journey from Self to Service

The moving, entertaining, never-before-told story of how one man found his calling.

"The book is called Grateful American, and I promise you after you read it you will be grateful for what Gary has accomplished and contributed to our country." -- Clint Eastwood

As a kid in suburban Chicago, Gary Sinise was more interested in sports and rock 'n' roll than reading or schoolwork. But when he impulsively auditioned for a school production of West Side Story, he found his purpose--or so it seemed.

Within a few years Gary and a handful of friends created what became one of the most exciting and important new theater companies in America. From its humble beginnings in a suburban Chicago church basement and eventual move into the city, the Steppenwolf Theatre Company launched a series of groundbreaking productions, igniting Gary's career along with those of John Malkovich, Joan Allen, Gary Cole, Laurie Metcalf, Jeff Perry, John Mahoney, and others. Television and film came calling soon after, and Gary starred in Of Mice and Men (which he also directed) and The Stand before taking the role that would change his life in unforeseeable ways: Lieutenant Dan in the Academy Award–winning Forrest Gump.

The military community's embrace of the character of the disabled veteran was matched only by the depth of Gary's realization that America's defenders had not received all the honor, respect, and gratitude their sacrifices deserve. In the aftermath of the September 11 attacks, this became Gary's mission. While starring in hits like Apollo 13, Ransom, Truman, George Wallace, CSI:NY, and Criminal Minds: Beyond Borders, Gary has worked tirelessly on behalf of those who serve this country, entertaining more than a half million troops around the world playing bass guitar with his Lt. Dan Band, raising funds on behalf of veterans, and eventually founding the Gary Sinise Foundation with a mission to serve and honor America's defenders, veterans, first responders, their families, and those in need.

Grateful American is the moving, entertaining, profoundly gripping story of how one man found his calling: to see that those who defend this country and its freedoms are never forgotten.

The book, Grateful American: A Journey from Self to Service [Bulk, Wholesale, Quantity] ISBN# 9781400208128 in Hardcover by Gary Sinise;Marcus Brotherton may be ordered in bulk quantities. Minimum starts at 25 copies. Availability based on publisher status and quantity being ordered.
View AllClose

The Truths We Hold: An American Journey

MSRP:
Now:
As low as
Was:
A New York Times bestseller From one of America's most inspiring political leaders, a book about the core truths that unite us, and the long struggle to discern what those truths are and how best to...

MSRP:
Now:
As low as
Was:
From New York Times bestselling biographer Bob Spitz, a full and rich biography of an epic American life, capturing what made Ronald Reagan both so beloved and so transformational. More than five...

Life Is Magic: My Inspiring Journey from Tragedy to Self-Discovery

MSRP:
Now:
As low as
Was:
An extraordinary and empowering story of resilience, forgiveness, and living a life of purpose in the face of unfathomable obstacles. You might recognize him as an NFL All-Pro or as an elite...

Liking Myself Back: An Influencer's Journey from Self-Doubt to Self-Acceptance

MSRP:
Now:
As low as
Was:
With millions of followers and a thriving lifestyle brand, Damsel in Dior, Jacey Duprie is one of today’s top fashion influencers. Her beautiful Instagram photos capture a life of glamour, luxury and...

MSRP:
Now:
As low as
Was:
Jane Austen's witty comedy of manners is one of the most universally loved and admired English novels of all time. Spirited Elizabeth Bennet is one of a family of five daughters, and with no male...

MSRP:
Now:
As low as
Was:
Pulling my radiation mask out of my pocket, my rough hands snagged the fine gauze. How could such a thin weave protect me from death? You can't see radiation, or smell it, or feel it. Could a mask...

MSRP:
Now:
As low as
Was:
A young teenager stays a step ahead of her parents’ sexuality-based restrictions by running away and learns a very different set of rules. A woman grieves the loss of a sister, a “gay divorce,” and...

Have You Thanked an Inventor Today?

MSRP:
Now:
As low as
Was:
Have You Thanked an Inventor Today? is a journey into the often forgotten contributions of African-American inventors, that contributed to the American landscape. It chronicles the school day of a...

The One Man [Hardcover]

MSRP:
Now:
As low as
Was:
“As moving as it is gripping. A winner on all fronts.”―Booklist (starred review) “Heart-pounding…This is Gross’s best work yet, with his heart and soul imprinted on every page.”―Kirkus Reviews...