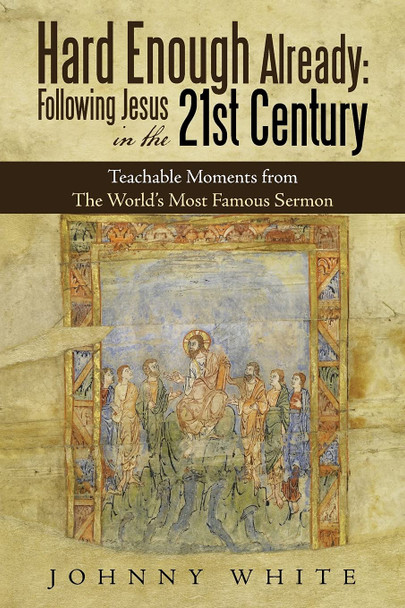 MSRP:
Now: List Price $17.95
Was:
— You save
Paperback
This product qualifies for FREE US Ground Shipping on orders over $100.

The most familiar sermon in the world, The Sermon on the Mount, spoken by Jesus of Nazareth over 2000 years ago, is still a critically important message for followers of Jesus in the 21st century. Every word of every paragraph of every topic is addressed in this brief book. Jesus is drawing the watching world to unparalleled teachable moments about how to be salt and light citizens in the Kingdom of God on earth as it is in heaven.

Johnny White contends that life is hard enough already. Jesus did not come to make things harder than they already are by limiting salvation to only the FEW, but he upheld impossible possibilities that point to the undeniable grace of God for the MANY. Jesus pointed to a life more abundant than retribution and revenge and violence. He pointed to a Third Way of mercy, forgiveness, and grace that refuses violence, yet never fails to confront evil. A life such as Dietrich Bonhoeffer sought to live.

What could be more apropos for a contentious uncivil time such as this? No matter what happens next.

The book, Hard Enough Already: Following Jesus in the 21St Century: Teachable Moments from the World's Most Famous Sermon [Bulk, Wholesale, Quantity] ISBN# 9781664228320 in Paperback by Johnny White may be ordered in bulk quantities. Minimum starts at 25 copies. Availability based on publisher status and quantity being ordered.
View AllClose

MSRP:
Now:
As low as
Was:
You may only be able to experience something so big, so revolutionary that it creates a rush of excitement a handful of times in your life—Airbnb is one of these times, and its fullest potential has...

Lead from the Heart: Transformational Leadership for the 21st Century

MSRP:
Now:
As low as
Was:
Our common belief in business is that the heart has no place in workplace management. In fact, most of us were taught that the heart acts like Kryptonite in leadership: it inherently undermines a...

MSRP:
Now:
As low as
Was:
The 21ST CENTURY BUSINESS SERIES is an innovative instructional program providing instructors with the greatest flexibility to deliver business content using a modular format. Instructors can create...

How to Be an Indian in the 21st Century

MSRP:
Now:
As low as
Was:
In deceptively simple prose and verse, Louis V. "Two Shoes" Clark III shares his life story, from childhood on the Rez, through school and into the working world, and ultimately as an elder,...

Teachable Moments: Theological Reflections from the World's Most Familiar Prayer

MSRP:
Now:
As low as
Was:
Teachable Moments consists of theological reflections on the world's most familiar prayer taken from the lips of Jesus Himself, repeated on a weekly basis in churches throughout the world. Many who...

Bending the Arc: My Journey from Prison to Politics

MSRP:
Now:
As low as
Was:
A searing exposé of the profound failures in our justice system, told by a woman who has journeyed from wrongfully accused prisoner to acclaimed public defender Keeda Haynes was a Girl Scout and a...

This Is the Fire: What I Say to My Friends about Racism

MSRP:
Now:
As low as
Was:
In this ‘vital book for these times’ (Kirkus Reviews), Don Lemon brings his vast audience and experience as a reporter and a Black man to today’s most urgent question: How can we end racism in...

The Last Star: The Final Book of The 5th Wave [Paperback]

The Inheritors: An Intimate Portrait of South Africa's Racial Reckoning

MSRP:
Now:
As low as
Was:
A dozen years in the making, The Inheritors weaves together the stories of three ordinary South Africans over five tumultuous decades in a sweeping and exquisite look at what really happens when a...

Life's Messy, Live Happy: Things Don't Have to Be Perfect for You to Be Content

MSRP:
Now:
As low as
Was:
A simple shift in thinking can change everything you believe about your own happiness. By the time we become adults, most of us have joined the religion of suffering, which preaches that unless...

The Shattering: America in the 1960s

MSRP:
Now:
As low as
Was:
A Kirkus Reviews Best Nonfiction Book of the Year From the National Book Award winner, a masterful history of the decade whose conflicts shattered America’s postwar order and divide us still...

The Soul of America: The Battle for Our Better Angels [Paperback]

MSRP:
Now:
As low as
Was:
#1 NEW YORK TIMES BESTSELLER • Pulitzer Prize–winning author Jon Meacham helps us understand the present moment in American politics and life by looking back at critical times in our history when...

MSRP:
Now:
As low as
Was:
Bestselling author Liz Curtis Higgs shares God's love and redemption with this beautiful fall story about a farmer who turns a simple pumpkin into a bright light that brings joy. Help your children...