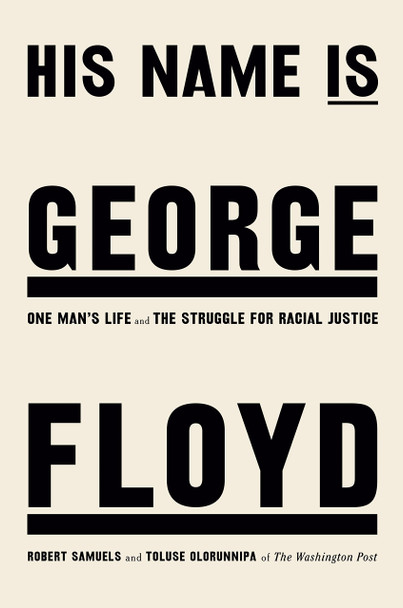 A landmark biography by two prizewinning Washington Post reporters that reveals how systemic racism shaped George Floyd's life and legacy—from his family’s roots in the tobacco fields of North Carolina, to ongoing inequality in housing, education, health care, criminal justice, and policing—telling the singular story of how one man’s tragic experience brought about a global movement for change.

The events of that day are now tragically familiar: on May 25, 2020, George Floyd became the latest Black person to die at the hands of the police, murdered outside of a Minneapolis convenience store by white officer Derek Chauvin. The video recording of his death set off a series of protests in the United States and around the world, awakening millions to the dire need for reimagining this country’s broken systems of policing. But behind a face that would be graffitied onto countless murals, and a name that has become synonymous with civil rights, there is the reality of one man’s stolen life: a life beset by suffocating systemic pressures that ultimately proved inescapable.

This biography of George Floyd shows the athletic young boy raised in the projects of Houston’s Third Ward who would become a father, a partner, a friend, and a man constantly in search of a better life. In retracing Floyd’s story, Washington Post reporters Robert Samuels and Toluse Olorunnipa bring to light the determination Floyd carried as he faced the relentless struggle to survive as a Black man in America. Placing his narrative within the larger context of America’s deeply troubled history of institutional racism, His Name Is George Floyd examines the Floyd family’s roots in slavery and sharecropping, the segregation of his Houston schools, the overpolicing of his communities, the devastating snares of the prison system, and his attempts to break free from drug dependence—putting today's inequality into uniquely human terms. Drawing upon hundreds of interviews and extensive original reporting, Samuels and Olorunnipa offer a poignant and moving exploration of George Floyd’s America, revealing how a man who simply wanted to breathe ended up touching the world.

The book, His Name Is George Floyd: One Man's Life and the Struggle for Racial Justice [Bulk, Wholesale, Quantity] ISBN# 9780593490617 in Hardcover by Robert Samuels; Toluse Olorunnipa may be ordered in bulk quantities. Minimum starts at 25 copies. Availability based on publisher status and quantity being ordered.
View AllClose

MSRP:
Now:
As low as
Was:
A thrilling and incisive examination of the post-Reconstruction era struggle for and suppression of African American voting rights in the United States. Following the Civil War, the Reconstruction...

Freedom Riders: A Primary Source Exploration of the Struggle for Racial Justice ( We Shall Overcome )

MSRP:
Now:
As low as
Was:
The Freedom Riders were a courageous group of people who decided to fight against bus segregation. They had no idea how bad it could get. But they were ready to stand up for their beliefs. Explore...

Freedom Riders: 1961 and the Struggle for Racial Justice (2ND ed.)

MSRP:
Now:
As low as
Was:
The saga of the Freedom Rides is an improbable, almost unbelievable story. In the course of six months in 1961, four hundred and fifty Freedom Riders expanded the realm of the possible in American...

Better, Not Bitter: Living on Purpose in the Pursuit of Racial Justice

MSRP:
Now:
As low as
Was:
This inspirational memoir serves as a call to action from prison reform activist Yusef Salaam, of the Exonerated Five, that will inspire us all to turn our stories into tools for change in the...

Marked for Life: One Man's Fight for Justice from the Inside

MSRP:
Now:
As low as
Was:
The incredible memoir of a wrongfully imprisoned man's epic journey to free himself and others like him. Isaac Wright Jr. was wrongly accused of drug charges in New Jersey and sentenced to life in...

Fierce Love: A Memoir of Family, Faith, and Purpose

MSRP:
Now:
As low as
Was:
Like her superstar sons' and extraordinary daughter's, Sonya Curry’s journey was filled with defeats and hard-fought victories, but hers took place out of the limelight, without the eyes of the world...

Forward: Notes on the Future of Our Democracy

MSRP:
Now:
As low as
Was:
A lively and bold blueprint for moving beyond the “era of institutional failure” by transforming our outmoded political and economic systems to be resilient to twenty-first-century problems, from the...

MSRP:
Now:
As low as
Was:
A BookPal Staff Pick for June 2021 The first Black female CEO of a Fortune 500 company looks back at her life and her career at Xerox, sharing unique insights on American business and corporate life,...

MSRP:
Now:
As low as
Was:
**A 2019 OWL AWARD SHORTLIST WINNER IN THE POLITICS & CURRENT EVENTS CATEGORY**A deeply moving work of narrative nonfiction on the tragic shootings at the Mother Emanuel AME church in Charleston,...