History of US: An Age of Extremes 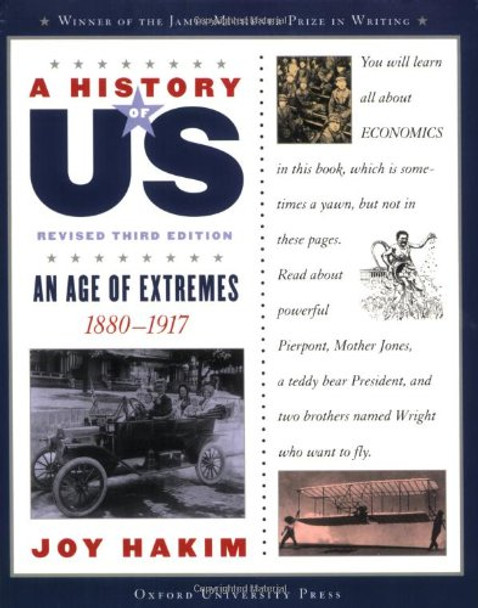 History of US: An Age of Extremes

The book, History of US: An Age of Extremes [Bulk, Wholesale, Quantity] ISBN# 9780195327229 in Paperback by may be ordered in bulk quantities. Minimum starts at 25 copies. Availability based on publisher status and quantity being ordered.
View AllClose

Age of Anger: A History of the Present

MSRP:
Now:
As low as
Was:
One of our most important public intellectuals reveals the hidden history of our current global crisis How can we explain the origins of the great wave of paranoid hatreds that seem inescapable in...

The Internet of Us: Knowing More and Understanding Less in the Age of Big Data

MSRP:
Now:
As low as
Was:
"An intelligent book that struggles honestly with important questions: Is the net turning us into passive knowers? Is it degrading our ability to reason? What can we do about this?" ―David...

The Human Age: The World Shaped by Us

MSRP:
Now:
As low as
Was:
Winner of the 2015 National Outdoor Book Award for Natural History Literature and the 2015 PEN New England Henry David Thoreau Prize. A dazzling, inspiring tour through the ways that humans are...

MSRP:
Now:
As low as
Was:
Recommended by the Common Core State Standards for English Language Arts and Literacy as an exemplary informational text. Thousands of years--way before Christopher Columbus set sail--wandering...

MSRP:
Now:
As low as
Was:
"This book is a tour de force." --Adam Grant, New York Times bestselling author of Give and Take A revolutionary new history of humankind through the prism of work by leading anthropologist James...

MSRP:
Now:
As low as
Was:
After being initiated into a neighbor's family by a solemn backyard ceremony, a young Russian American girl and her African American brothers' determine to buy their gramma Eula a beautiful Easter...

The Schmuck in My Office: How to Deal Effectively with Difficult People at Work [Hardcover]

MSRP:
Now:
As low as
Was:
Everyone has a “schmuck” in their office―a difficult, disruptive person who upsets the workplace, confuses their co-workers and causes concern. No one is safe from a schmuck. They come in many sizes...

Becoming a Dangerous Woman: Embracing Risk to Change the World

MSRP:
Now:
As low as
Was:
An intimate and inspiring memoir and call to action from Pat Mitchell -- groundbreaking media icon, global advocate for women's rights, and co-founder and curator of TEDWomen Raised in a small town...

MSRP:
Now:
As low as
Was:
The life of artist Georgia O'Keeffe is revealed in this biographical novel -- from her childhood when she decided to be an artist, through her art education in Chicago and New York, to her eventual...

The Seven Wonders of Sassafras Springs

MSRP:
Now:
As low as
Was:
Life in Sassafras Springs has always been predictable, boring even, but one afternoon that changes when Eben McAllister's pa challenges him to find Seven Wonders in Sassafras that rival the real...

An American Plague : The True and Terrifying Story of the Yellow Fever Epidemic Of 1793

MSRP:
Now:
As low as
Was:
1793, Philadelphia. The nation's capital and the largest city in North America is devastated by an apparently incurable disease, cause unknown . . . In a powerful, dramatic narrative, critically...

MSRP:
Now:
As low as
Was:
A family road trip is supposed to be a lot of fun . . . unless, of course, you’re the Heffleys. The journey starts off full of promise, then quickly takes several wrong turns. Gas station bathrooms,...

Things Seen from Above

MSRP:
Now:
As low as
Was:
A shift in perspective can change everything. This brilliant new novel from the author of The Seventh Most Important Thing celebrates kids who see the world a little differently. April is looking...