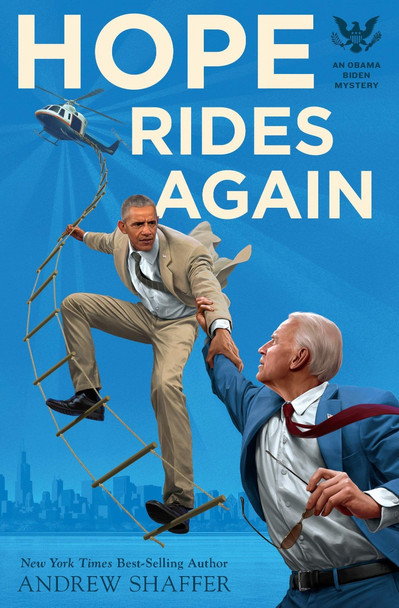 In the sequel to the New York Times best-selling novel Hope Never Dies, Obama and Biden reprise their roles as BFFs-turned-detectives as they chase Obama's stolen cell phone through the streets of Chicago--and right into a vast conspiracy.

Following a long but successful book tour, Joe Biden has one more stop before he can return home: Chicago. His old pal Barack Obama has invited him to meet a wealthy benefactor whose endorsement could turn the tide for Joe if he decides to run for president.

The two friends barely have time to catch up before another mystery lands in their laps: Obama’s prized Blackberry is stolen. When their number-one suspect winds up full of lead on the South Side, the police are content to write it off as just another gangland shooting. But Joe and Obama smell a rat...

Set against the backdrop of a raucous city on St. Patrick’s Day, Joe and Obama race to find the shooter, only to uncover a vast conspiracy that goes deeper than the waters of Lake Michigan—which is exactly where they’ll spend the rest of their retirement if they’re not careful.

MSRP:
Now: $18.99
Was:
Ever since Barack Obama was young, Hope has lived inside him. From the beaches of Hawaii to the streets of Chicago, from the jungles of Indonesia to the plains of Kenya, he has held on to Hope. Even...

To Obama: With Love, Joy, Anger, and Hope

MSRP:
Now: $28.00
Was:
President Barack Obama received ten thousand letters a day from his constituents. This is the story of the private and profound relationship with letter writers that shaped his presidency. Their...

MSRP:
Now: $24.99
Was:
The 44th President of the United States of America. A look back at the most memorable moments of Barack Obama's extraordinary life, beloved family and historic political career. It’s been a over a...

MSRP:
Now: $24.95
Was:
A vibrant celebration of President Obama, this perfect souvenir book provides a valuable record of his historical presidency. As President Obama’s two terms come to an end—he served for 2,920...

MSRP:
Now: $16.00
Was:
The Diary of President Barack Obama The White House May 19, 2010 I was going to write about tonight’s state dinner for Mexico and the amnesty plan, but we’ve got a national crisis here! I think...

MSRP:
Now: $16.99
Was:
Darkus Cuttle's dad mysteriously goes missing from his job as Director of Science at the Natural History Museum. Vanished without a trace! From a locked room! So Darkus moves in with his eccentric...

MSRP:
Now: $8.99
Was:
When Ant receives a special invitation to dine with Lion, she is ready to be on her best behavior. During dessert, the other guests do not mind their manners, and by the time the dessert cake reaches...

Millennials Rising: The Next Great Generation

MSRP:
Now: $18.95
Was:
By the authors of the bestselling13th Gen, the first in-depth examination of the Millennials--the generation born after 1982. "Over the next decade, the Millennial Generation will entirely recast the...

MSRP:
Now: $29.95
Was:
Installing agile tools and practices won't be enough to respond to rapid market change unless you lay the groundwork with six key enabling factors, identified by the United Kingdom's leading agile...

Angels in America: A Gay Fantasia on National Themes (Revised)

MSRP:
Now: $16.95
Was:
Winner of the Pulitzer Prize for Drama Angels in America: A Gay Fantasia on National Themes includes Part One, Millennium Approaches and Part Two, Perestroika “Glorious. A monumental, subversive,...

MSRP:
Now: $7.95
Was:
A desperate young man plans the perfect crime -- the murder of a despicable pawnbroker, an old women no one loves and no one will mourn. Is it not just, he reasons, for a man of genius to commit such...

MSRP:
Now: $7.99
Was:
What can you make with one oval, two circles, and eight triangles? Just ask three clever mice—who even find a funny way to trick a sneaky cat. Ellen Stoll Walsh once again proves that...

MSRP:
Now: $16.00
Was:
The 10th anniversary edition of the New York Times bestseller and international classic loved by millions of readers. The unforgettable, heartbreaking story of the unlikely friendship between a...

The Valley of the Shadow of Death: A Tale of Tragedy and Redemption [Hardcover]

MSRP:
Now: $26.00
Was:
In this heart-wrenching memoir, former NFL star Kermit Alexander tells the devastating true story of the horrific massacre of his family and his subsequent years of despair, followed by a spiritual...