I Am Hermes!: Mischief-Making Messenger of the Gods 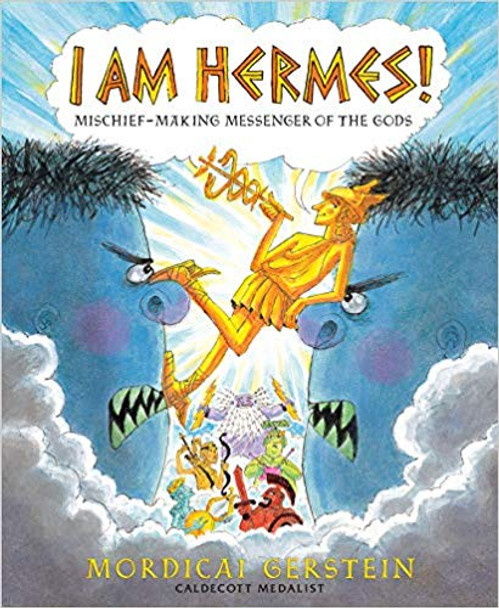 I Am Hermes!: Mischief-Making Messenger of the Gods

At birth, Hermes, son of Zeus and the Nymph Maia, says his first word: "Gimme!" In this brilliant, hilarious graphic novel about the mischievous, fun-loving messenger of the gods, Caldecott Medal winner Mordicai Gerstein, transports classical mythology to the 21st century.

"The world!" the newly born Hermes says. "It's even better than I expected! I love it! I want it all!"

This book is filled with joy, exuberance, and humor. On his first day of life, Hermes manages to trick a turtle into surrendering its shell and a ram into surrendering its horns, thereby inventing the lyre, music, and song! He also manages to steal his brother Apollo's precious cows, but later redeems himself by outwitting the giant brothers Otus and Ephialtes, who have kidnapped Mars.

These adventures and more, all derived from classical mythology, are told with great humor as well as a twenty-first century sensibility by the colossally talented Mordicai Gerstein.

The art in this graphic novel is truly spectacular, with 250 illustration executed by a master.

The book, I Am Hermes!: Mischief-Making Messenger of the Gods [Bulk, Wholesale, Quantity] ISBN# 9780823439423 in Hardcover by Mordicai Gerstein may be ordered in bulk quantities. Minimum starts at 25 copies. Availability based on publisher status and quantity being ordered.
View AllClose

I Am the Messenger

MSRP:
Now:
As low as
Was:
By the author of the #1 New York Times bestseller The Book Thief, this is a cryptic journey filled with laughter, fists, and love. Ed Kennedy is an underage cabdriver without much of a future. He's...

I Am Rosa Parks

MSRP:
Now:
As low as
Was:
When Rosa Parks refused to give up her seat on a bus to a white man on December 1, 1955, she made history. Her brave act sparked the Montgomery, Alabama bus boycott and brought the civil rights...

I Am Devotional: 100 Devotions about the Names of God

MSRP:
Now:
As low as
Was:
The God Who Saves. The God Who Provides. The Holy One. The names of God tell us who He is and how He loves us—explore the glory and the goodness of God in I Am Devotional. Children will learn to...

Making Sense of God: An Invitation to the Skeptical

MSRP:
Now:
As low as
Was:
We live in an age of skepticism. Our society places such faith in empirical reason, historical progress, and heartfelt emotion that it’s easy to wonder: Why should anyone believe in Christianity?...

I Thought It Was Just Me but It Isn't: Making the Journey from "What Will People Think?" to "I Am Enough" [Paperback]

MSRP:
Now:
As low as
Was:
The quest for perfection is exhausting and unrelenting. We spend too much precious time and energy managing perception and creating carefully edited versions of ourselves to show to the world. As...

Selling Naked: A Revolutionary Approach to Launching Your Brand Online

MSRP:
Now:
As low as
Was:
“A candid, behind-the-scenes look at how successful direct-to-consumer brands such as Hubble are launching their businesses on platforms like Facebook and Google.”—Lisa Sherman, president and CEO,...

A Chorus Rises: A Song Below Water Novel

MSRP:
Now:
As low as
Was:
THE LATEST NOVEL FROM YA SENSATION BETHANY C. MORROW Meet Naema Bradshaw: a beautiful Eloko, once Portland-famous, now infamous, as she navigates a personal and public reckoning where confronting...

MSRP:
Now:
As low as
Was:
Lisa Thompson returns to the world of The Goldfish Boy in her new novel. Melody Bird has discovered an old, abandoned building on the edge of town...It's a dark, creepy place, but she can't resist...

MSRP:
Now:
As low as
Was:
This Jamaican-inspired fantasy debut about two enemy witches who must enter into a deadly alliance to take down a common enemy has the twisted cat-and-mouse of Killing Eve with the richly imagined...

The Profit Paradox: How Thriving Firms Threaten the Future of Work

MSRP:
Now:
As low as
Was:
A pioneering account of the surging global tide of market power―and how it stifles workers around the world In an era of technological progress and easy communication, it might seem reasonable to...

MSRP:
Now:
As low as
Was:
Seasoned trends forecaster and consultant Annie Auerbach takes a fresh look at women’s professional lives today by rethinking the 9 to 5 in this “no-nonsense guide to thinking and behaving more...

MSRP:
Now:
As low as
Was:
There are more than 38,000 types of spiders. They live almost everywhere, even in your basement! Spiders have eight legs and fangs. They spin silk into webs-and use the webs to catch their dinner!...