I Never Had It Made: An Autobiography of Jackie Robinson [Paperback] 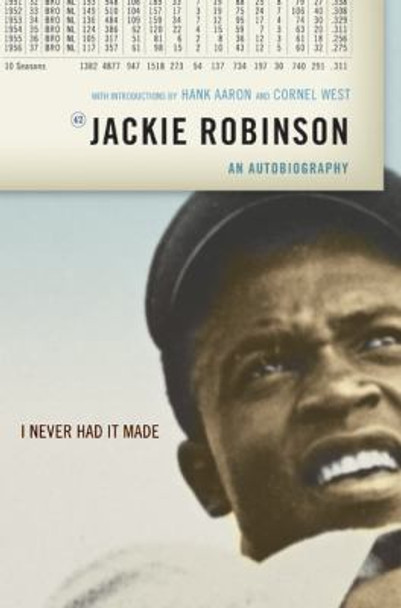 I Never Had It Made: An Autobiography of Jackie Robinson [Paperback]

The Autobiography of a Boy of Summer Who Became a Man for All Seasons Before Barry Bonds, before Reggie Jackson, before Hank Aaron, baseball's stars had one undeniable trait in common: they were all white. In 1947, Jackie Robinson broke that barrier, striking a crucial blow for racial equality and changing the world of sports forever. I Never Had It Made is Robinson's own candid, hard-hitting account of what it took to become the first black man in history to play in the major leagues. I Never Had It Made recalls Robinson's early years and influences: his time at UCLA, where he became the school's first four-letter athlete; his army stint during World War II, when he challenged Jim Crow laws and narrowly escaped court martial; his years of frustration, on and off the field, with the Negro Leagues; and finally that fateful day when Branch Rickey of the Brooklyn Dodgers proposed what became known as the "Noble Experiment"—Robinson would step up to bat to integrate and revolutionize baseball. More than a baseball story, I Never Had It Made also reveals the highs and lows of Robinson's life after baseball. He recounts his political aspirations and civil rights activism; his friendships with Martin Luther King, Jr., Malcolm X, William Buckley, Jr., and Nelson Rockefeller; and his troubled relationship with his son, Jackie, Jr. Originally published the year Robinson died, I Never Had It Made endures as an inspiring story of a man whose heroism extended well beyond the playing field.

The book, I Never Had It Made: An Autobiography of Jackie Robinson [Bulk, Wholesale, Quantity] ISBN# 9780060555979 in Paperback by Robinson, Jackie W.;Duckett, Alfred;Robinson, Jackie may be ordered in bulk quantities. Minimum starts at 25 copies. Availability based on publisher status and quantity being ordered.
View AllClose

MSRP:
Now:
As low as
Was:
After Sam's father died, he became so wrapped up in the Brooklyn Dodgers that he could describe every game they'd played in the past four years. Nobody was very interested, until Sam met Davy. They...

In the Year of the Boar and Jackie Robinson

MSRP:
Now:
As low as
Was:
Shirley Temple Wong sails from China to America with a heart full of dreams.Her new home is Brooklyn, New York. America is indeed a land full of wonders, but Shirley doesn't know any English, so it's...

Who Was Jackie Robinson?

MSRP:
Now:
As low as
Was:
As a kid, Jackie Robinson loved sports. And why not? He was a natural at football, basketball, and, of course, baseball. But beyond athletic skill, it was his strength of character that secured his...

MSRP:
Now:
As low as
Was:
Simple, engaging text and vivid photographs introduce young learners to the most important and influential men and women in history.... The book, Jackie Robinson ( Rookie Biographies (Paperback) )...

MSRP:
Now:
As low as
Was:
Jackie Robinson broke the color barrier and integrated Major League baseballchanging the game forever. Kids will enjoy discovering more about this champion of equality, including: His astonishing...

The Shape of Thunder

MSRP:
Now:
As low as
Was:
A BookPal Staff Pick for May 2021 An extraordinary new novel from Jasmine Warga, Newbery Honor–winning author of Other Words for Home, about loss and healing—and how friendship can be...

Answering the Cry for Freedom: Stories of African Americans and the American Revolution [Hardcover]

MSRP:
Now:
As low as
Was:
Even as American Patriots fought for independence from British rule during the Revolutionary War, oppressive conditions remained in place for the thousands of enslaved and free African Americans...

MSRP:
Now:
As low as
Was:
A little girl and her parents have lost their home and must live in a homeless shelter. Even worse, due to a common shelter policy, her dad must live in a men's shelter, separated from her and her...

Cracking the SAT with 4 Practice Tests, 2017 Edition: All the Techniques, Practice, and Review You Need to Score Higher (College Test Preparation)

MSRP:
Now:
As low as
Was:
SUCCEED ON THE SAT WITH THE PRINCETON REVIEW! With 4 full-length practice tests, in-depth reviews for all exam content, and strategies for scoring success, Cracking the SAT covers every facet of this...

MSRP:
Now:
As low as
Was:
A deeply honest investigation of what it means to be a woman and a commodity from Emily Ratajkowski, the archetypal, multi-hyphenate celebrity of our time. Emily Ratajkowski is an acclaimed model and...

MSRP:
Now:
As low as
Was:
In the tradition of E.H. Gombrich, Stephen Hawking, and Alan Weisman―An entertaining and uniquely informed narration of Life's life story. In the beginning, Earth was an inhospitably alien...