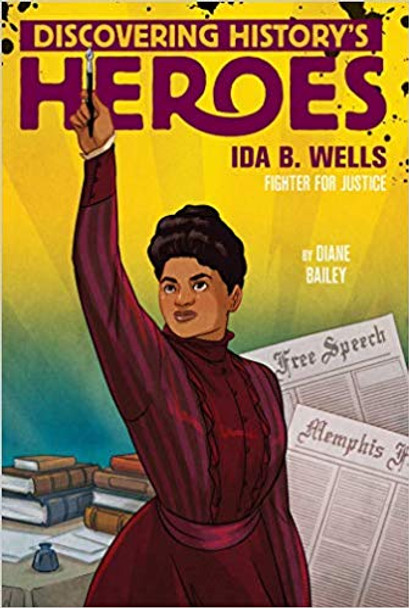 MSRP:
Now: List Price $6.99
Was:
— You save
Paperback
This product qualifies for FREE US Ground Shipping on orders over $100.

Jeter Publishing presents a brand-new series that celebrates men and women who altered the course of history but may not be as well-known as their counterparts.

Ida B. Wells was an African-American journalist and activist who led an anti-lynching crusade in the United States in the 1890s.

On one fateful train ride from Memphis to Nashville, in May 1884, Wells reached a personal turning point. Having bought a first-class train ticket, she was outraged when the train crew ordered her to move to the car for African Americans. She refused and was forcibly removed from the train—but not before she bit one of the men on the hand. Wells sued the railroad, winning a $500 settlement. However, the decision was later overturned by the Tennessee Supreme Court.

This injustice led Ida B. Wells to pick up a pen to write about issues of race and politics in the South. Using the moniker “Iola,” a number of her articles were published in black newspapers and periodicals. Wells eventually became an owner of the Memphis Free Speech and Headlight, and, later, of the Free Speech.

She even took on the subject of lynching, and in 1898, Wells brought her anti-lynching campaign to the White House, leading a protest in Washington, DC, and calling for President William McKinley to make reforms.

Ida B. Wells never backed down in the fight for justice.

The book, Ida B. Wells: Discovering History's Heroes (Jeter Publishing) [Bulk, Wholesale, Quantity] ISBN# 9781534424845 in Paperback by Diane Bailey may be ordered in bulk quantities. Minimum starts at 25 copies. Availability based on publisher status and quantity being ordered.
View AllClose

Day at the Beach (Jeter Publishing)

MSRP:
Now:
As low as
Was:
A day at the beach becomes a lesson in sibling bonding for Gideon in this magical picture book. Every summer, Gideon and his younger sister Audrey build a sand castle—together. But this summer,...

MSRP:
Now:
As low as
Was:
The only authorized full-color book commemorating Derek Jeter’s iconic baseball career with the New York Yankees, featuring archival images and original photos of his final 2014 season from renowned...

MSRP:
Now:
As low as
Was:
An inspiring collection of essays by black women writers, curated by the founder of the popular book club Well-Read Black Girl, on the importance of recognizing ourselves in literature. “Yes,...

MSRP:
Now:
As low as
Was:
Jeter Publishing presents the second nonfiction biography in a brand-new series that celebrates men and women who altered the course of history often without recognition. On July 16, 1969, a Gemini...

Ida B. the Queen: The Extraordinary Life and Legacy of Ida B. Wells

MSRP:
Now:
As low as
Was:
Journalist. Suffragist. Antilynching crusader. In 1862, Ida B. Wells was born enslaved in Holly Springs, Mississippi. In 2020, she won a Pulitzer Prize. Ida B. Wells committed herself to the needs...

Thunder on the Plains (PathFinders)

MSRP:
Now:
As low as
Was:
It's been two years and middle-school student Danny Wind is still not over his father's death. When his mom marries a white man and they move to a new "white bread" neighborhood, Danny's life changes...

Lost Companions: Reflections on the Death of Pets

MSRP:
Now:
As low as
Was:
A heartfelt exploration of human grief after the loss of a pet by the New York Times bestselling author of Dogs Never Lie About Love. Over 84 million Americans―almost 3/4 of the US population―own a...

MSRP:
Now:
As low as
Was:
Who doesn't want to be a cover girl? London Abrams's fi rst love is volleyball, so why does she enter an online modeling competition? Answer: superhottie Brent St. John. London spots Brent signing in...

The Prince of the Pond: Otherwise Known as de Fawg Pin

MSRP:
Now:
As low as
Was:
Having been turned into a frog by a hag, a frog-prince makes the best of his new life as he mates, raises a family, and instills a new kind of thinking into his frog familyThe book, The Prince of the...

MSRP:
Now:
As low as
Was:
A beautiful and practical book on choosing and caring for over 100 easy-to-find houseplants, as well as inspiring plant styling advice and much more. Fresh flowers are great—everyone loves receiving...