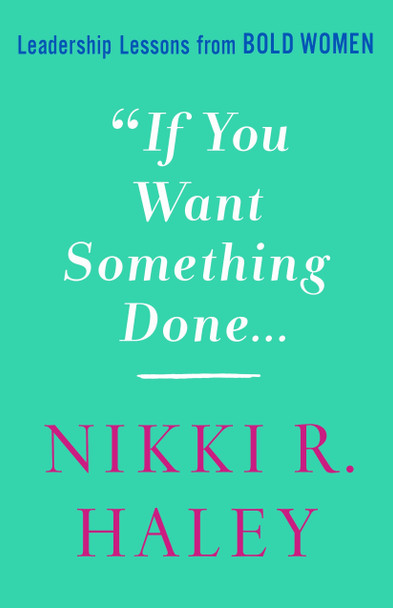 This title is available for pre-order and will be processed on Oct 4th 2022 for shipment.

In the spirit of Thatcher’s quote, Ambassador Nikki R. Haley offers inspiring examples of women who worked against obstacles and opposition to get things done—including Haley herself. As a brown girl growing up in Bamberg, South Carolina, no one would have predicted she would become the first minority female governor in America, the first female and the first minority governor in South Carolina, or the U.S. ambassador to the United Nations. Her journey wasn’t an easy one. She faced many people who thought she didn’t belong—and who told her so. She was too brown. Too female. Too young. Too conservative. Too principled. Too idealistic. As far as Nikki was concerned, those were not reasons to hold her back. Those were all reasons to forge ahead.

She drew inspiration from other trailblazing women throughout history who summoned the courage to be different and lead. This personal and compelling book celebrates ten remarkable women who dared to be bold, from household names like Margaret Thatcher and Israel’s former prime minister Golda Meir, to Jeane Kirkpatrick, the first female U.S. ambassador to the United Nations, to lesser-known leaders like human rights activist Cindy Warmbier, education advocate Virginia Walden Ford, civil rights pioneer Claudette Colvin, and more. Woven with stories from Haley’s own childhood and political career, If You Want Something Done will inspire the next generation of leaders.

The book, If You Want Something Done: Leadership Lessons from Bold Women [Bulk, Wholesale, Quantity] ISBN# 9781250284976 in Hardcover by Nikki R. Haley may be ordered in bulk quantities. Minimum starts at 25 copies. Availability based on publisher status and quantity being ordered.
View AllClose

What Do You Do When Something Wants to Eat You?

MSRP:
Now:
As low as
Was:
What would you do if something wanted to eat you? Walk on water? Stick out your tongue? Play dead? Animals in the wild use all kinds of methods to protect themselves from their enemies. Using dynamic...

Founding Leadership: Lessons on Business and Personal Leadership from the Men Who Brought You the American Revolution

MSRP:
Now:
As low as
Was:
Great leadership is desperately needed in the world today. History affords many models of strong, effective leadership. To many of us, the leaders of the American Revolution are distant men of myth –...

Bow Down: Lessons from Dominatrixes on How to Get Everything You Want

MSRP:
Now:
As low as
Was:
*One of Glamour’s Best Books of 2020* Popular podcast host and personal finance expert Lindsay Goldwert explores what professional dominatrixes can teach us about confidence, power, and happiness. ...

MSRP:
Now:
As low as
Was:
A powerful call to action for achieving equality in leadership. Women make up fewer than ten per cent of national leaders worldwide, and behind this eye-opening statistic lies a pattern of unequal...

MSRP:
Now:
As low as
Was:
On the outside, Yumi Chung suffers from #shygirlproblems, a perm-gone-wrong, and kids calling her "Yu-MEAT" because she smells like her family's Korean barbecue restaurant. On the inside, Yumi is...

MSRP:
Now:
As low as
Was:
In Jenn Woodall's debut graphic novel series, three teenagers attending school on the moon try to keep their boredom and resentments at bay as they stumble across an exciting secret that could change...

Rich Dad Poor Dad: What the Rich Teach Their Kids about Money That the Poor and Middle Class Do Not! (Anniversary) [Mass Market Paperback]

MSRP:
Now:
As low as
Was:
April of 2022 marks a 25-year milestone for the personal finance classic Rich Dad Poor Dad that still ranks as the #1 Personal Finance book of all time. And although 25 years have passed since Rich...

MSRP:
Now:
As low as
Was:
Uh-oh. Mrs. Wishy-Washy is at it again. Rubbing and scrubbing all the animals on the farm. But this time they aren't standing for it. Duck, Cow, and Pig are leaving mean old Mrs. Wishy-Washy for...

Perfectly You: Embracing the Power of Being Real

MSRP:
Now:
As low as
Was:
In this much-needed book, which is part self-help and part autobiography, award-winning correspondent Mariana Atencio digs into what makes each of us special and the ways in which we can become a...

MSRP:
Now:
As low as
Was:
Featuring a foreword by motivational speaker Mike Robbins, Inspirational Quotes offers daily doses of wit and wisdom, from beloved authors and musicians to notable philosophers and politicians...

MSRP:
Now:
As low as
Was:
**A 2020 OWL AWARD LONGLIST WINNER IN THE HIGH SCHOOL CATEGORY**A Finalist for the National Book Award When Ada leaves home for her freshman year at a Historically Black College, it’s the first...

MSRP:
Now:
As low as
Was:
WHEN A LOVABLE, lonely robot named WALL•E falls in love with a sophisticated female robot named EVE, he follows his heart all the way into outer space! Young fans will enjoy this Little Golden Book...

I'd Know You Anywhere, My Love

Rules of the Road [Paperback]

MSRP:
Now:
As low as
Was:
Meet Jenna Boller, star employee at Gladstone Shoe Store in Chicago. Standing a gawky 5'11' at 16 years old, Jenna is the kind of girl most likely to stand out in the crowd... The book, Rules of the...