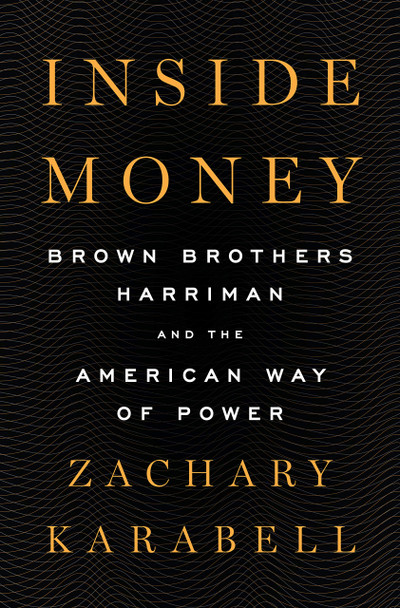 A sweeping history of the legendary private investment firm Brown Brothers Harriman, exploring its central role in the story of American wealth and its rise to global power

Conspiracy theories have always swirled around Brown Brothers Harriman, and not without reason. Throughout the nineteenth century, when America was convulsed by a devastating financial panic essentially every twenty years, Brown Brothers quietly went from strength to strength, propping up the U.S. financial system at crucial moments and catalyzing successive booms, from the cotton trade and the steamship to the railroad, while largely managing to avoid the unwelcome attention that plagued some of its competitors. By the turn of the twentieth century, Brown Brothers was unquestionably at the heart of what was meant by an American Establishment. As America's reach extended beyond its shores, Brown Brothers worked hand in glove with the State Department, notably in Nicaragua in the early twentieth century, where the firm essentially took over the country's economy. To the Brown family, the virtue of their dealings was a given; their form of muscular Protestantism, forged on the playing fields of Groton and Yale, was the acme of civilization, and it was their duty to import that civilization to the world. When, during the Great Depression, Brown Brothers ensured their strength by merging with Averell Harriman's investment bank to form Brown Brothers Harriman, the die was cast for the role the firm would play on the global stage during World War II and thereafter.

In Inside Money, acclaimed historian, commentator, and former financial executive Zachary Karabell offers the first full and frank look inside this institution against the backdrop of American history. Blessed with complete access to the company's archives, as well as a thrilling understanding of the larger forces at play, Karabell has created an X-ray of American power--financial, political, cultural--as it has evolved from the early 1800s to the present. Today, unlike many of its competitors, Brown Brothers Harriman remains a private partnership and a beacon of sustainable capitalism, having forgone the heady speculative upsides of the past thirty years but also having avoided any role in the devastating downsides. The firm is no longer in the command capsule of the American economy, but, arguably, that is to its credit. If its partners cleaved to any one adage over the generations, it is that a relentless pursuit of more can destroy more than it creates.

The book, Inside Money: Brown Brothers Harriman and the American Way of Power [Bulk, Wholesale, Quantity] ISBN# 9781594206610 in Hardcover by Zachary Karabell may be ordered in bulk quantities. Minimum starts at 25 copies. Availability based on publisher status and quantity being ordered.
View AllClose

American Oligarchs: The Kushners, the Trumps, and the Marriage of Money and Power

MSRP:
Now: $30.00
Was:
A multigenerational saga of two families, who rose from immigrant roots to the pinnacle of wealth and power, that tracks the unraveling of American democracy. In American Oligarchs, award-winning...

The Prize: The Epic Quest for Oil, Money and Power

MSRP:
Now: $23.00
Was:
Deemed "the best history of oil ever written" by Business Week and with more than 300,000 copies in print, Daniel Yergin’s Pulitzer Prize–winning account of the global pursuit of oil, money, and...

The Production of Money: How to Break the Power of Bankers

MSRP:
Now: $19.95
Was:
What is money, where does it come from, and who controls it? Money makes the world go round: but what is it really? And how is it produced? Above all, who controls its production, and in whose...

MSRP:
Now: $19.99
Was:
Discover your role in the $50-trillion "clean money" revolution that is bringing true prosperity to the world. By 2050, $50 trillion will change hands in North America in the largest generational...

MSRP:
Now: $28.00
Was:
A revelatory biography of the first Black woman to stand for Vice President, charting how the daughter of two immigrants in segregated California became one of this country’s most effective power...

Tribe: On Homecoming and Belonging [Paperback]

MSRP:
Now: $17.99
Was:
The acclaimed New York Times bestseller, now in paperback! The bestselling author of War and The Perfect Storm takes readers on an investigation of how we overcome trauma and seek something bigger...

I Am Not Your Perfect Mexican Daughter [Hardcover]

The Essential Path: Making the Daring Decision to Be Who You Truly Are [Hardcover]

MSRP:
Now: $16.99
Was:
“Deep inside you know Who You Truly Are. We all do. It's not a question of discovering it, it's a question of claiming it. Being it. And that's actually easier done than said. We're all just one...

MSRP:
Now: $9.99
Was:
Before The 5th Wave, there was Alfred Kropp. This second book in Rick Yancey's lauded series was called a "rip-roaring story that teens will love" in School Library Journal's starred review. Now the...

My Book about Cancer: A Workbook to Help Children Deal with the Diagnosis and Treatment of a Mother with Cancer [Paperback]

MSRP:
Now: $6.00
Was:
When a father or mother has been diagnosed with cancer, the entire family can be traumtized. "My Book About Cancer is a workbook that gives children an effective emotional outlet as they cope with...

Lillies of the Field: The Timeless Classic of Love and Faith [Mass Market Paperback]

MSRP:
Now: $6.00
Was:
One of the most beloved of modern classics returns with a beautiful new cover. The enchanting story of two unlikely friends, a black ex-GI and the head of a group of German nuns, The Lilies of the...

On Saudi Arabia: Its People, Past, Religion, Fault Lines - And Future [Hardcover]

MSRP:
Now: $28.95
Was:
From the Pulitzer Prizewinning reporter who has spent the last thirty years writing about Saudi Arabia-as diplomatic correspondent, foreign editor, and then publisher of The Wall Street Journal-an...

MSRP:
Now: $5.95
Was:
The story of Victor Frankenstein and the monstrous creature he created has held readers spellbound ever since it was published almost two centuries ago. On the surface, it is a novel of tense and...

MSRP:
Now: $6.99
Was:
Exceptional nonfiction for children from two of the most trusted names in science education: Seymour Simon and the Smithsonian InstitutionThe book, Weather ISBN 9780060884390 in Paperback by Simon,...

MSRP:
Now: $8.99
Was:
Clement Hurd redrew some of his pictures for this new edition of the profoundly comforting story of a bunny's imaginary game of hide-and-seek and the lovingly steadfast mother who finds him every...