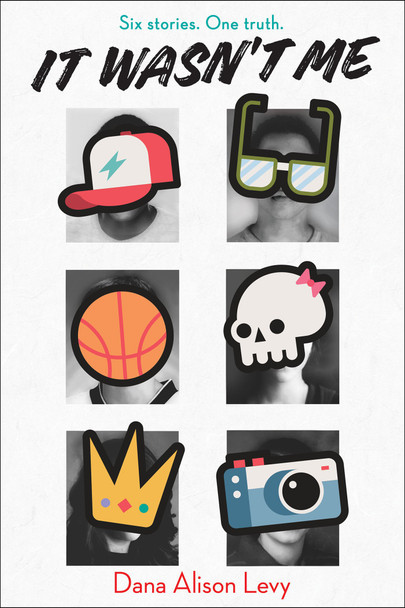 "Every reader will find some piece of themselves in Levy's sharp, humorous, and heartfelt novel. A twisty mystery with quirky, unforgettable characters and a positive message to boot."
—JOHN DAVID ANDERSON, the critically acclaimed author of Ms. Bixby’s Last Day and Posted

The Breakfast Club meets middle school with a prank twist in this hilarious and heartwarming story about six very different seventh graders who are forced to band together after a vandalism incident.

When Theo's photography project is mysteriously vandalized at school there are five suspected students who all say "it wasn't me."

Theo just wants to forget about the humiliating incident but his favorite teacher is determined to get to the bottom of it and has the six of them come into school over vacation to talk. She calls it "Justice Circle." The six students—the Nerd, the Princess, the Jock, the Screw Up, the Weirdo, and the Nobody—think of it as detention. AKA their worst nightmare.

That is until they realize they might get along after all, despite their differences. But what is everyone hiding and will school ever be the same?

"What at first seems like a novel solely about bullying becomes a story about six kids who find their way to true friendship and fierce loyalty, and why restorative justice is worth the time and effort it takes." —Publishers Weekly, starred review

"A timely, introspective whodunit with a lot of heart." —Kirkus Reviews, starred review

The book, It Wasn't Me [Bulk, Wholesale, Quantity] ISBN# 9781524766467 in Paperback by Dana Alison Levy may be ordered in bulk quantities. Minimum starts at 25 copies. Availability based on publisher status and quantity being ordered.
View AllClose

I Never Said I Wasn't Difficult

MSRP:
Now:
As low as
Was:
In these four collections of verse ( The Dog Ate My Homework, I Never Said I Wasn't Difficult, Am I Naturally This Crazy?and Which Way to the Dragon!), Sara Holbrook deals honestly with issues facing...

Animal Kingdom: Color Me, Draw Me

The Bear Who Wasn't There

MSRP:
Now:
As low as
Was:
This book is about Bear... so what happens when he doesn't show up on his page? Who will find him? Will it be Giraffe, who himself seems to always be in the wrong place at the wrong time, or Cow, or...

The Bear That Wasn't

MSRP:
Now:
As low as
Was:
Once upon a time, in fact it was Tuesday," the Bear went into the woods to settle in for his long winter nap. But when he awoke what had happened? The trees were gone, the grass was gone, the flowers...

Running While Black: Finding Freedom in a Sport That Wasn't Built for Us

MSRP:
Now:
As low as
Was:
“Runners know that running brings us to ourselves. But for Black people, the simple act of running has never been so simple. It is a declaration of the right to move through the world. If running is...

MSRP:
Now:
As low as
Was:
“Patricelli offers friendly, cartoonlike characters that show their love in individual ways. . . . Readers ought to find all this kissing and hugging contagious.” — Publishers Weekly When you’re...

MSRP:
Now:
As low as
Was:
The little red hen finds none of her lazy friends willing to help her plant, harvest, or grind wheat into flour, but all are eager to eat the bread she makes from it. The book, The Little Red Hen...

MSRP:
Now:
As low as
Was:
English-Spanish bilingual board book celebrates the many ways babies reach out and discover the world around them. Wiggly baby on the floor. What is baby reaching for? With lively rhyming text and...

MSRP:
Now:
As low as
Was:
This bilingual board book introduces first vocabulary about nature with appealing, textured illustrations that compare the itty-bitty things we see in nature, like acorns and raindrops, with great...

MSRP:
Now:
As low as
Was:
A Little Book About Feelings is a beautiful English / Spanish bilingual picture book with enchanting images and an empowering message about expressing emotions. The book sweetly teaches young...

The Thank You Letter

MSRP:
Now:
As low as
Was:
Celebrate gratitude and simple ways of brightening others' days with this sweet, brightly illustrated story about a girl's letters. . . . and her town's overwhelming response. After a wonderful...

My Big Barefoot Book of Spanish and English Words

MSRP:
Now:
As low as
Was:
A bilingual first words collection with a twist: this unique book combines storytelling with English and Spanish vocabulary building as young readers follow the adventures of the Palabra family as...

MSRP:
Now:
As low as
Was:
Winner of the Newbery Medal and a beloved classroom read, Walk Two Moons tells the story of a bold girl named Salamanca Tree Hiddle. This novel combines culture, heritage and heart to create...