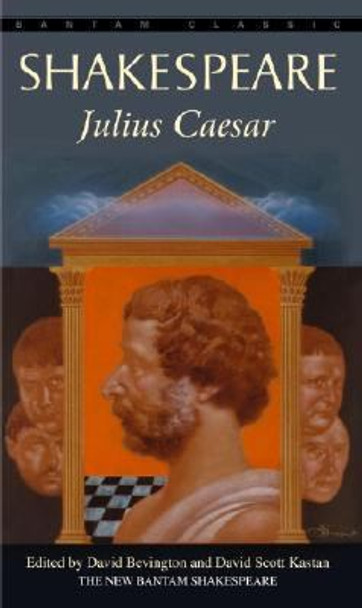 MSRP:
Now: List Price $5.95
Was:
— You save
Mass Market Paperback
This product qualifies for FREE US Ground Shipping on orders over $100.

In this striking tragedy of political conflict, Shakespeare turns to the ancient Roman world and to the famous assassination of Julius Caesar by his republican opponents. The play is one of tumultuous rivalry, of prophetic warnings–“Beware the ides of March”–and of moving public oratory, “Friends, Romans, countrymen!” Ironies abound and most of all for Brutus, whose fate it is to learn that his idealistic motives for joining the conspiracy against a would-be dictator are not enough to sustain the movement once Caesar is dead. Each Edition Includes: • Comprehensive explanatory notes • Vivid introductions and the most up-to-date scholarship • Clear, modernized spelling and punctuation, enabling contemporary readers to understand the Elizabethan English • Completely updated, detailed bibliographies and performance histories • An interpretive essay on film adaptations of the play, along with an extensive filmography

The book, Julius Caesar [Bulk, Wholesale, Quantity] ISBN# 9780553212969 in Mass Market Paperback by Shakespeare, William may be ordered in bulk quantities. Minimum starts at 25 copies. Availability based on publisher status and quantity being ordered.
View AllClose

MSRP:
Now:
As low as
Was:
Shakespeare may have written Julius Caesar as the first of his plays to be performed at the Globe, in 1599. For it, he turned to a key event in Roman history: Caesar’s death at the hands of friends...

MSRP:
Now:
As low as
Was:
A charismatic politician's assassination leads to a civil war in Shakespeare's drama of ancient Rome. Written in 1599 about an event from more than 2,000 years ago, this historical play continues to...

MSRP:
Now:
As low as
Was:
Julius Caesar rose from chaos to bring order to Rome. After gaining power, he attacked his allies and won a brutal civil war. Then he declared himself dictator and ruled Rome from a golden throne...

MSRP:
Now:
As low as
Was:
Rome, 44BC, the great general Julius Caesar arrives home from war as the sole ruler of Rome. The citizens cheer the conquering hero, but not all are pleased to see him return. Many fear that with...

MSRP:
Now:
As low as
Was:
This edition of Julius Cesear is especially designed for students, with accessible on-page notes and explanatory illustrations, clear background information, and rigorous but accessible scholarly...

The Freshman Survival Guide: Soulful Advice for Studying, Socializing, and Everything in Between (Revised) [Paperback]

MSRP:
Now:
As low as
Was:
A completely revised and updated values-based guide to navigating the first year of college that speaks to college students in their own language and offers practical tools that readers need to keep...

Trumponomics: Inside the America First Plan to Revive Our Economy [Hardcover]

MSRP:
Now:
As low as
Was:
In Trumponomics, conservative economists Stephen Moore and Arthur B. Laffer offer a well-informed defense of the president's approach to trade, taxes, employment, infrastructure, and other economic...

MSRP:
Now:
As low as
Was:
When Sister Bear starts to play with a new friend, Lizzy feels jealous. The Berenstain Bears Faithful Friends teaches that new friends are fun to have and old friends are great to keep. The book, The...

MSRP:
Now:
As low as
Was:
RUN, RUN as fast as you can. You can’t catch me— I’m the Gingerbread Man! Recently discovered in the Golden Books archive, this favorite folktale has been out of print for over 30 years. The early...

MSRP:
Now:
As low as
Was:
Explores the most common lessons we learn when we experience loss and explains how to turn a set-back into a step forward by examining the eleven elements that make up the DNA of those who learn......