Jump-Starting America: How Breakthrough Science Can Revive Economic Growth and the American Dream 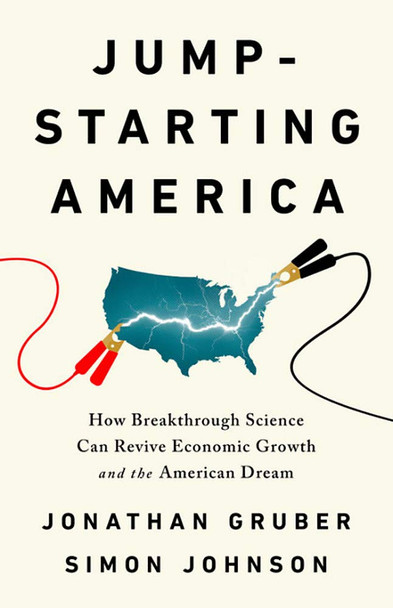 Jump-Starting America: How Breakthrough Science Can Revive Economic Growth and the American Dream

The untold story of how America once created the most successful economy the world has ever seen and how we can do it again.

The American economy glitters on the outside, but the reality is quite different. Job opportunities and economic growth are increasingly concentrated in a few crowded coastal enclaves. Corporations and investors are disproportionately developing technologies that benefit the wealthiest Americans in the most prosperous areas--and destroying middle class jobs elsewhere. To turn this tide, we must look to a brilliant and all-but-forgotten American success story and embark on a plan that will create the industries of the future--and the jobs that go with them.

Beginning in 1940, massive public investment generated breakthroughs in science and technology that first helped win WWII and then created the most successful economy the world has ever seen. Private enterprise then built on these breakthroughs to create new industries--such as radar, jet engines, digital computers, mobile telecommunications, life-saving medicines, and the internet-- that became the catalyst for broader economic growth that generated millions of good jobs. We lifted almost all boats, not just the yachts.

Jonathan Gruber and Simon Johnson tell the story of this first American growth engine and provide the blueprint for a second. It's a visionary, pragmatic, sure-to-be controversial plan that will lead to job growth and a new American economy in places now left behind.

The book, Jump-Starting America: How Breakthrough Science Can Revive Economic Growth and the American Dream [Bulk, Wholesale, Quantity] ISBN# 9781541762480 in Hardcover by Jonathan Gruber;Simon Johnson may be ordered in bulk quantities. Minimum starts at 25 copies. Availability based on publisher status and quantity being ordered.
View AllClose

Raising the Floor: How a Universal Basic Income Can Renew Our Economy and Rebuild the American Dream

MSRP:
Now:
As low as
Was:
Advances in technology are creating the next economy and enabling us to make things/do things/connect with others in smarter, cheaper, faster, more effective ways. But the price of this progress has...

MSRP:
Now:
As low as
Was:
Jump in and get up close to honey bees to learn all about what they are, how hard they work, and the important tasks they perform during their life cycle. Adorable illustrations and kid-friendly text...

Concrete Economics: The Hamilton Approach to Economic Growth and Policy

MSRP:
Now:
As low as
Was:
History, not ideology, holds the key to growth. Brilliantly written and argued, Concrete Economics shows how government has repeatedly reshaped the American economy ever since Alexander Hamilton?s...

MSRP:
Now:
As low as
Was:
The untold history of the surprising origins of the "gig economy" --how deliberate decisions made by consultants and CEOs in the 50s and 60s upended the stability of the workplace and the lives of...

Lead from the Future: How to Turn Visionary Thinking Into Breakthrough Growth

MSRP:
Now:
As low as
Was:
From the author of the groundbreaking book Reinvent Your Business Model, a new approach for thinking about the future and turning your most promising and creative ideas into reality. We all know...

MSRP:
Now:
As low as
Was:
Streamline your desk and make charging your device while you work effortless with the integrated wireless charging mouse pad. Anti-slip base. LED indicator light illuminates when a device has been...

MSRP:
Now:
As low as
Was:
Most Anticipated: The Great First Half 2021 by The Millions New York’s last bohemia—the glittering, decadent downtown club scene of the 1980s—is the setting for this brilliantly winning novel...

MSRP:
Now:
As low as
Was:
The #1 New York Times bestseller from Brandon Sanderson, the author of Oathbringer, coauthor of Robert Jordan’s The Wheel of Time series, and creator of the internationally bestselling Mistborn...

The Essential Deming: Leadership Principles from the Father of Total Quality Management

MSRP:
Now:
As low as
Was:
The name W. Edwards Deming is synonymous with the most insightful views, ideas, and commentary on management and quality control. Referred to as "the high prophet of quality" by the New York Times,...

MSRP:
Now:
As low as
Was:
When twelve-year-old Izzy spends the summer in her Nana's remote New Mexico village, she discovers long-buried secrets that come alive in an enchanted landscape of majestic mountains, whispering...