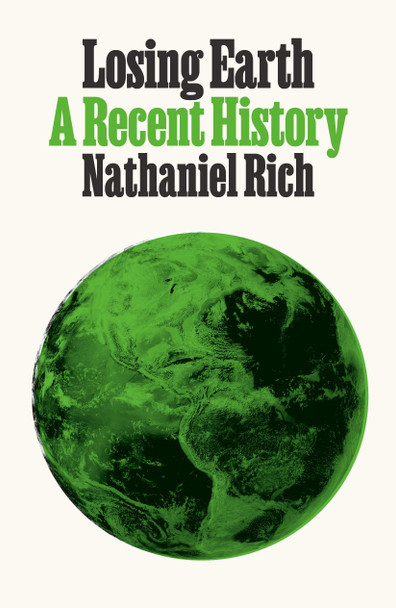 By 1979, we knew nearly everything we understand today about climate change―including how to stop it. Over the next decade, a handful of scientists, politicians, and strategists, led by two unlikely heroes, risked their careers in a desperate, escalating campaign to convince the world to act before it was too late. Losing Earth is their story, and ours.

The New York Times Magazine devoted an entire issue to Nathaniel Rich’s groundbreaking chronicle of that decade, which became an instant journalistic phenomenon―the subject of news coverage, editorials, and conversations all over the world. In its emphasis on the lives of the people who grappled with the great existential threat of our age, it made vivid the moral dimensions of our shared plight.

Now expanded into book form, Losing Earth tells the human story of climate change in even richer, more intimate terms. It reveals, in previously unreported detail, the birth of climate denialism and the genesis of the fossil fuel industry’s coordinated effort to thwart climate policy through misinformation propaganda and political influence. The book carries the story into the present day, wrestling with the long shadow of our past failures and asking crucial questions about how we make sense of our past, our future, and ourselves.

Like John Hersey’s Hiroshima and Jonathan Schell’s The Fate of the Earth, Losing Earth is the rarest of achievements: a riveting work of dramatic history that articulates a moral framework for understanding how we got here, and how we must go forward.

The book, Losing Earth: A Recent History [Bulk, Wholesale, Quantity] ISBN# 9781250251251 in Paperback by Nathaniel Rich may be ordered in bulk quantities. Minimum starts at 25 copies. Availability based on publisher status and quantity being ordered.
View AllClose

MSRP:
Now:
As low as
Was:
Billie Wind is disciplined for doubting the beliefs of her Seminole tribe. She chooses her punishment--to journey into the Florida Everglades until she hears the animal gods who talk. . . . The...

The Earth and Beyond [Paperback]

The Pillars of the Earth [Paperback]

MSRP:
Now:
As low as
Was:
View our Ken Follett feature page. Learn more about The Pillars of the Earthminiseries on Starz. A departure for the bestselling thriller writer, this historical epic-a twelfth-century tale of the...

MSRP:
Now:
As low as
Was:
"Tender and illuminating. A beautiful debut." --Rebecca Stead, Newbery Medal-winning author of When You Reach Me A heartrending and hopeful story about a nonverbal girl and her passion for space...

You Turn: Get Unstuck, Discover Your Direction, and Design Your Dream Career

MSRP:
Now:
As low as
Was:
If you're thinking about buying this book, it's probably because it feels like something's missing in your career. Guess what? It could be YOU. Whether you're living for the weekends or counting...

Madeline at the White House

MSRP:
Now:
As low as
Was:
Welcome to America, Madeline!Madeline and friends are off to enjoy a wonderful American adventure. The White House in Washington, D.C., is their destination, where they are the guests of the...

MSRP:
Now:
As low as
Was:
Help boil the greens, flip the fish, and slice the pie for a mouth-watering family meal in I Smell Honey, then join the fun as a baby boy discovers the unique features that make his face so special...

MSRP:
Now:
As low as
Was:
Meet Jacob. He is an ordinary kid, except he has a secret. Jacob is a Super Hero! Well not really, but he feels like one because he understands the power of self control. Join Jacob as he...

MSRP:
Now:
As low as
Was:
Revisit one of the most beloved books in Laura Ingalls Wilder’s classic Little House series with this gorgeous hardcover, unjacketed edition of Little House on the Prairie, featuring new, iconic...

MSRP:
Now:
As low as
Was:
The Pout-Pout Fish's morning has been maddening and rough. Disappointments and frustrations―Mr. Fish has had enough! It's been one thing, then another, then another stacked on top. He's mad and...